What does Sankranti mean?

The word sankranti is used in the context of the Hindu calendar to refer to one of the 12 movements of the sun from one section of the zodiac to another. However, the word is perhaps best known for its use in the name of the Makar Sankranti, a Hindu festival celebrating the winter solstice and the transition to springtime, as well as the harvest.

Makar Sankranti marks the movement of the sun into Capricorn.

Makar Sankranti is sometimes simply called Sankranti. It is also sometimes called Uttarayan. Similar festivals that take place at the same time are known as Pongal and Lohri, though these may be considered entirely separate observances (even though they also celebrate the harvest and the transition to springtime).

In some places, Makar Sankranti is celebrated with kite flying, and the name Uttarayan is sometimes used as the name of a kite festival, notably in the Indian state of Gujarat.

Traditions associated with Makar Sankranti vary from place to place and include charitable giving and ritual bathing in sacred rivers. Some people also burn old items, light bonfires, and give presents of sweets to each other.

Makar Sankranti is observed on January 14.

The term Uttarayan often refers to the entire period between the winter solstice and the summer solstice, but the name Makar Sankranti is usually used to refer to a celebration lasting a few days (or the moment when the sun moves into Capricorn).

Where does Sankranti come from? 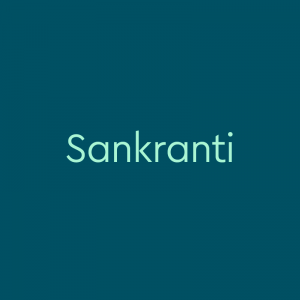 The word Sankranti comes from Sanskrit and refers to the movement of the sun. In Makar Sankranti, the word Makar refers to Capricorn.

Makar Sankranti celebrates the movement of the sun into Capricorn, a time that’s considered auspicious due to the coming of longer days and shorter nights.

Wishing everyone Makara Sankrati. May the diety of the Sun shower blessings to all and may it bring us some great news today on Sushant's 7th month
@AryaMM92398097, January 13, 2021
That’s how we celebrated our Sankranti this year at our residence! Colourful bright and full of customs, always look forward to #Sankrati celebrations !
@RaoKavitha, January 14, 2021
Makar Sankranti is a major harvest festival celebrated by Hindus across India, however different states celebrated the festival under different names, traditions and festivities. Makar Sankranti marks the end of winter as well as the beginning of longer days on account of the sun's northward journey, this period is also known as Uttarayan on this account and is considered to be very auspicious.
Alfea Jamal, The Hindustan Times, January 12, 2021
SEE MORE EXAMPLES

What are other words used in discussion of Sankranti?

This is not meant to be a formal definition of Sankranti like most terms we define on Dictionary.com, but is rather an informal word summary that hopefully touches upon the key aspects of the meaning and usage of Sankranti that will help our users expand their word mastery.