Feedback
Previous How To Name A Cocktail Next Is It OK To Say I'm OCD?

by Ashley Austrew The word fat holds a complicated place in our society. As an adjective, it joins words like tall, hairy, fluffy, or bright.

But, unlike those descriptors, fat isn’t neutral. It’s so often framed as a negative—and used as an insult. However, the body positivity movement, fat activism, and popular books and television shows centered on fat characters are proving that narrative is wearing thin.

What does fat mean?

A primary definition of fat is “having too much flabby tissue; corpulent; obese.” As a noun and adjective, fat is found in Old English (fǣtt), from a verb form meaning “to cram, load, adorn.” The word has cousins in Germanic languages, like the German Fett/fett.

Historically, fat had a number of positive meanings. In the late 1300s, fat land was “fertile” and “abundant.” In the 1600s, a fat person could be “wealthy” or “affluent.” That underlying sense of prosperity lingers in fat cat, a 1920s barb at a “wealthy person,” especially one with political influence.

But, even in Old English, fat was already being frowned upon—and the word went on to spawn many an insult. As early as the 1830s, people were using the term fathead to describe “a stupid person or a fool.” In the 1940s, fatso disparaged “a fat person.” By this time, pejorative senses of fat prevailed.

When did being fat become “bad”?

For much of history, as W.F. Ferris and N.J. Crowther explained in 2011 research, “excess body fat [was] a symbol of wealth and prosperity as the general population struggled with food shortages and famine,” as we can see in Renaissance portraits celebrating full-figured women. Technology and industry in the 19th and 20th centuries made food stabler, cheaper, and more widely available as well as increased the overall standard of living—but that came with more sedentary lifestyles and processed foods, creating new concerns about weight.

By the 1940–50s, thinness had spread as the new ideal for health and beauty. In March 1954, Life magazine featured an article, “The Plague of Overweight,” which characterized obesity as “the most serious health problem today.” “The uncompromising truth,” it went on, “is that obesity is caused by gluttony.” At the time, only around three percent of Americans were considered obese.

Soon, magazines were publishing all manner of absurd diets, like the Domino Sugar Diet, which encouraged people (yes, primarily women) to increase their sugar intake as a means of losing weight. One ad touted that three teaspoons of Domino-brand sugar contained fewer calories than half a grapefruit. (Clearly, Domino Sugar was feeling the pinch of America’s emerging weight consciousness.) 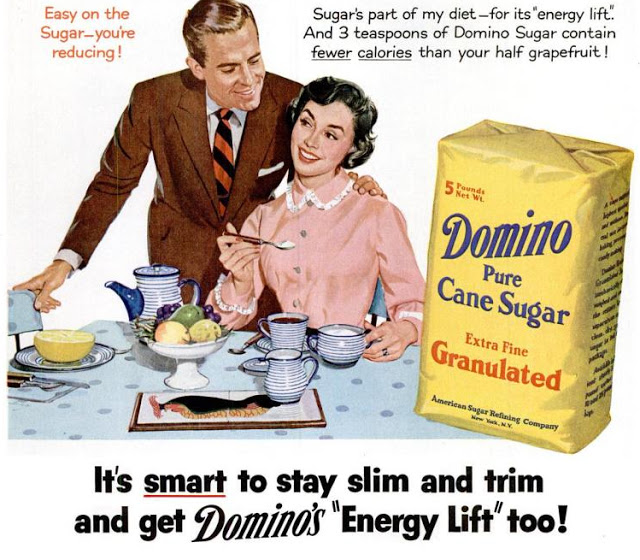 There was also the cabbage soup diet, which instructed people to eat only cabbage soup and limit their intake of other kinds of foods for an entire week. In the 1970s, Vogue published a now-viral wine and egg diet, which advocated, in part, snacking on boiled eggs and drinking an entire bottle of wine every day for three days.

Ridiculous? Yes. But, the culture was so steeped in the idea that fat was evil that even the craziest, unhealthiest diet would have been seen as good. The trend has only continued today.

We still have fad diets (e.g., Keto, intermittent fasting, gluten-free when not being used to treat gluten sensitivities) and weight-loss programs (Beachbody, Noom, and WW, formerly Weight Watchers, which dates all the way back to the 1960s). We are still exposed to questionable health advice (we’re looking at you, Goop). Far too many people still believe the misinformation that fat people are fat because they are gluttonous, lazy, and don’t care about their health—not to mention the fact that being skinny isn’t the same as being healthy.

Scientific research has shown, however, that diets, no matter the type, do not work on a lasting basis for many people. More important, there are many reasons why a person may be larger, and that does not make them moral failures.

Why we should stop using fat as an insult

In our culture, fatness is a constant source of shame and ridicule. Research has shown children as young as four have said they wouldn’t want to be friends with a fat child, revealing how early weight discrimination can occur. Other research has found that more than half of doctors described their fat patients as “ugly,” “awkward,” and “noncompliant” with their recommendations.

Media promoting weight-loss advice and the “healthiest” ways to live perpetuate the myth that weight is a matter of personal choice and responsibility. Nonetheless, science suggests that body size is the result of a complex web of factors, including social and economic influences, genetics, food production and availability, urban design, land use, advertising, and public safety and transportation.

Furthermore, fat-shaming and weight-stigmatizing hurt people’s health and well-being. Weight-shaming has been associated with weight gain, despite some people’s misguided belief that they can bully people into losing weight. Fat-shaming is also associated with an increase in the risk of depression and low self-esteem. Fat people are often misdiagnosed at the doctor and have medical concerns overlooked or ignored. Weight discrimination may even shorten life expectancies.

This is all part of why many fat activists, as they proudly call themselves, are reclaiming the word fat and squashing its stigma. The Fat Acceptance Movement is working to challenge fat bias and end systemic discrimination against fat people. Plus-size models like Tess Holliday and Ashley Graham are working to change what kinds of bodies get represented in the fashion world. And, TV shows like Hulu’s Shrill (based on Lindy West’s 2016 book of the same name) are putting the focus on fat characters who are empowered and accept themselves just as they are.

Perhaps the biggest shift needs to happen with individuals and the language they use. Fat is a noun. Fat is an adjective. Fat is not an insult, and it’s time for society and culture to stop doing harm to fat people by treating their body type like it’s a bad word.

Ashley Austrew is a freelance writer from Omaha, Nebraska. Her work has been published at Cosmopolitan, Scary Mommy, Scholastic, and other outlets. For more by Ashley, read: “Does ‘Spark Joy’ Mean The Same Thing In English And Japanese?” | Is There A Difference Between “Calling In” And “Calling Out”? | Why Do Journalists Avoid The Word “Liar”? | What Kind Of Songs Get To Be Called “Country Music”?

Previous How To Name A Cocktail Next Is It OK To Say I'm OCD?
RELATED POSTS

Home / Trending Words / When Did “Fat” Become An Insult?