What does Spooky Scary Skeletons mean?

Spooky Scary Skeletons is a song that becomes popular around October each year. It’s also a meme that includes skeletons in various forms appearing in conjunction with the song or the song’s lyrics.

Where does Spooky Scary Skeletons come from? 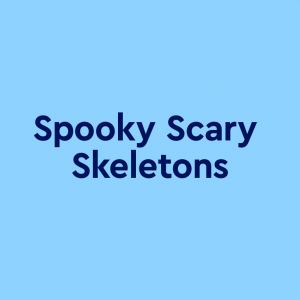 Spooky Scary Skeletons is the title of a 1996 children’s Halloween song by Andrew Gold. It appeared on the album Andrew Gold’s Halloween Howls. On May 5, 2010, a video of the 1929 Disney cartoon “The Skeleton Dance” with the Spooky Scary Skeletons playing in the background was uploaded to YouTube. At some point, the characters from this clip became a permanent part of the meme.

On February 24, 2013, the video “2spooky4me” was uploaded to YouTube. The video includes a person in all black with a pumpkin on their head dancing along to the song. This dancer became part of the meme as well.

It should also be noted that the phrase 2spooky4me and its association with the meme predate this video. On October 31, 2013, popular YouTuber and musician The Living Tombstone uploaded a remix of the original song. By 2017, it had over 45 million views. A version posted on Tumblr had over 481,000 notes at one point.

It’s not known exactly why, but the meme became more popular than ever in September and October of 2014. It might be that the modest success of 2013 allowed it to reach new heights,  since users were already familiar with the meme. It could be because The Living Tombstone song reached a wider audience by that point. Whatever the reason, 2014 was the year that ensured the meme would continue to be a hit in subsequent years.

Spooky Scary Skeletons is a seasonal meme. Because the original song is meant for Halloween, the meme usually pops back up around October each year.

GIFs of “The Skeleton Dance” are a common sight around this time, and the song itself (and remixes) enjoys heightened popularity.

The lyrics themselves may also accompany Halloween-related posts, especially those including skeletons. Any image of skeletons is also popular during this time. These might be props, animations, drawings, or costumes.

We're so sorry skeletons
You're so misunderstood
You only want to socialize
But I don't think we should
Cause spooky scary skeletons
Shout startling shrilly screams
They'll sneak from their sarcophagus
And just won't leave you be pic.twitter.com/rHNEcKUNGY

The phrase 2spooky4me or 2spooky is also sometimes associated with the meme.