What does stonks mean?

In internet slang, stonks is a deliberate misspelling of stocks, as traded in the stock market. It is often used to refer to such stocks—and finance more generally—in a humorous or ironic way, especially to comment on financial losses.

Where does stonks come from? 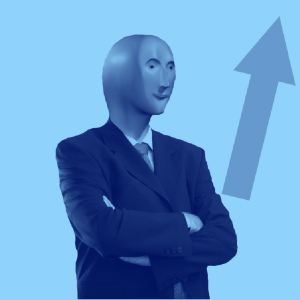 Stonks is credited to a meme that emerged on a Facebook group, called Special meme fresh, in 2017. The internet slang stonks is not related to the military verb and noun stonk, “to bombard with artillery” and “a concentrated bombardment by artillery,” respectively.

The meme features the word stonks, in white, below an orange, upward-pointing arrow (indicating stock prices are increasing) next to a generic man in a business suit. The man’s head has been substituted with a plain, intentionally unusual-looking computer-generated head. The man is standing before a blue, electronic stock quotation board.

In internet culture, the stonks meme is considered a so-called surreal meme, which is meant to be strange and absurd. (See our entry at dank memes.) The figure in the stonks meme is known as the Meme Man, a kind of recurring, stock character (like Wojak) in meme culture. Deliberate misspellings—such as rendering stocks as stonks—are popular in internet culture. These misspellings are often done to be humorous, playful, and ironic, among other reasons. Thicc and smol are some other recent examples. In the case of stonks, the success of the misspelling may also be due to the fact that stonks sound amusing to many people.

The stonks meme spread in 2018–19, especially on Reddit. By 2019, stonks was being increasingly used outside the context of the original meme to talk and joke about stocks online in various ways. For instance, the US stock market saw significant declines in early March during the coronavirus outbreak. Many people on Twitter commented on the financial news with stonks and stonks meme.

Why is stonks trending?

In late January 2021, stonks caught the attention of mainstream media due to its use during a “stock market war” over the stock of the video game retailer GameStop. A stock market subreddit /r/WallStreetBets encouraged users to invest heavily in GameStop stock in response to the stock being a major target of short sellers. The stonks meme was popular with the subreddit and would often be mentioned alongside posts about GameStop stock.

This “war” escalated quickly and social media users began using stonks and other memes that were popular among /r/WallStreetBets to show solidarity. This hit its apex when billionaire Elon Musk, who had been a fan of the stonks meme for years, apparently supported /r/WallStreetBets by tweeting “Gamestonk!!” and linking to the subreddit.

the fox business chyron is like... trying to make it look like stonks are going up 35% but it's actually covid-19 cases
@Chinchillazilla, March 9, 2020
Are you tired of TechCrunch reporting on the daily stock market gyrations? Well, we’re tired of writing about them. And yet here we are, because stonks yet again did wild things that we have to talk about.
Alex Wilhelm and Jonathan Shieber, TechCrunch, March 5, 2020

Stonks memes are often used to make (often hypothetical) jokes about situations where a person thinks they are cleverly making a profit but aren’t or can’t.

Stonks is sometimes used in an extended way to comment on all sorts of non-financial situations seen as a self-own or ironic in some way. The following quoted tweet roughly translates to, from Portuguese: “Conference on the coronavirus canceled due to the coronavirus.”

Stonks is also sometimes a generic, humorous way to refer to stocks, especially when they have dropped.

Ha! 7% drop in stonks, #bitcoin calls that a Thursday.

A riff of the original stonks meme, featuring not stonks, is sometimes used when stock prices fall on the market.

Oh no not the stonks 😱 #stonks pic.twitter.com/OUWbzIz7t2

This is not meant to be a formal definition of stonks like most terms we define on Dictionary.com, but is rather an informal word summary that hopefully touches upon the key aspects of the meaning and usage of stonks that will help our users expand their word mastery.