What does dank meme mean?

Dank meme refers to viral internet content that, due to overuse or passing trends, has lost its value or currency. It can also refer to exceptionally unique or odd memes.

slappy, We Are Number One, the struggle is real, meta, lel

Where does dank meme come from? 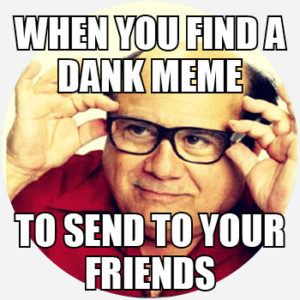 The phrase dank meme first emerged in 2013 on message boards within 4chan and Reddit that were dedicated to making parodies of existing memes and mocking meme culture.

According to Know Your Meme, one notable early instance of the phrase featured the so-called Gnome Child (a character from the online game Runescape) with the caption: “born just in time to browse dank memes.” Another shows a baby dressed as a police officer writing a ticket, with the caption “ur getting a ticket sir that meme wasn’t dank enough.”

As these examples illustrate, memes that use the phrase dank memes tend to be deliberately unusual, self-referential, and brimming with in-jokes that poke fun at meme creators who think they’re offering fresh takes on memes but have, in fact, fallen behind the internet’s fast-changing times and tastes. Calling something a dank meme thus suggests a broader critique of the meteoric rise and fall of viral content. In other words, “This meme was funny and cool until it got so popular.”

As Ryan Milner observed in his 2016 book, The World Made Meme, the phrase has been hoisted by its own petard: “The insult [dank meme] is every bit as memetic as the target it’s applied to. ‘Memes are dead’ is thus a well-worn meme itself.”

Spreading in 2014–15, the term dank meme rose to mainstream prominence with a Facebook Group, Bernie Sanders’ Dank Meme Stash, which churned out memes supporting Democratic candidate Bernie Sanders during the 2016 US presidential election (internet users frequently refer to a collection of dank memes as dank meme stashes). In May 2016, an Australian journalist drily defined dank meme on a broadcast, much to the meta-delight of many internet users.

The dank in dank meme is an ironic use of the slang term dank. According to lexicographer Jonathon Green, black, campus, and drug slang began repurposing dank—which originally meant “unpleasantly moist or humid”—as “excellent” or “first-rate,” especially with reference to high-quality marijuana, in the 1980s. Dank meme stash, as we saw, additionally alludes to the marijuana sense of dank.

The surprising inversion of the word dank, though, has many precedents. Slang has transformed other negative words, like bad, sick, or wicked, into positive ones. But dank meme flips dank once again, now characterizing online content as wholly un-dank: “passé or clichéd,” “out of touch,” or “having missed the cultural Zeitgeist.”

Still, as its irony wears off thanks to its own use, dank meme continues to evolve, referring to memes that are delightful, clever, or funny on account of their weirdness, obscurity, novelty, and idiosyncrasy. A constant engine behind dank meme, whether used negatively or positively, is content that hasn’t gone viral in the mainstream.

“@ben_mathiews happy birthday my brother, u make slab and guitar center much better, keep being a dank meme of a person and ramble on my dawg”
Joey Ponce @Joey_Ponce20 Twitter (March 29, 2017)
“Fact: A dank meme becomes a normie meme as soon as it gets featured on twitter moments.”
max panfilov @shterno Twitter (March 13, 2017)
“From his awkward wickety-wack hand gestures, to his dated slang, to his dank meme fails, to his Dilbert-meets-the-Fresh-Prince-Of-Bel-Air steez, Viersen’s flow is about as graceful and successful as a drunk beaver attempting to build a mud dam at Niagara Falls.”
Emmy Mack, “Video Of Conservative Canadian MP Trying To Rap Is Literally One Of The Worst Things Of All Time,” Music Feeds (May 31, 2016)
SEE MORE EXAMPLES

Dank meme is an informal expression used on social media and online forums to talk about memes and meme culture. Not everyone uses dank meme with its original irony, however. Increasingly, dank meme is being used earnestly, in the “cool” sense of dank. It’s sometimes even employed as a metaphor for someone or something special, unique, or exceptional, e.g., “She’s a dank meme of a person.”

This is not meant to be a formal definition of dank meme like most terms we define on Dictionary.com, but is rather an informal word summary that hopefully touches upon the key aspects of the meaning and usage of dank meme that will help our users expand their word mastery.