What does Afro-Latin mean?

In both Latin America and the United States, this population is usually coded as being Black.

Where does Afro-Latinx come from? 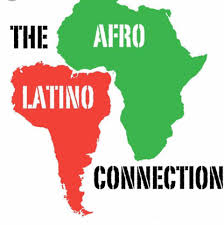 Afro-Latin, and other identifiers like the Spanish afrodescendientes (those of African descent), have long been used by governments and academics for Latin American people with African roots. Due to slavery and colonization, there are large populations of Afro-Latin people in Latin America, including Mexico, the Caribbean, Colombia, and Brazil.

In English, Afro-Latin is recorded in the early 1900s and by the 1950s, was frequently referring to

Interest in the term Afro-Latin grew in the United States throughout the early 2000s. Organizations like NACLA (North American Congress on Latin America), the Pew Research Center, and various universities began publishing articles about demographic.

As racial discourse expanded in the 2010s, so did the use of Afro-Latin. Entertainers like Christina Milian, Gina Torres, and Laz Alonso spoke out about the complexities of their particularAfro-Latin identity. Milian notably said on the issue in 2015: “As far as Afro-Cuban [goes], I’m finding more and more that there’s people opening their eyes to seeing that. Latinos come in all colors, all shades.” 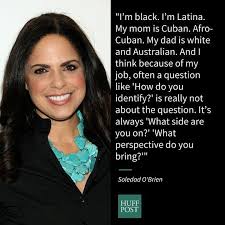 I think ‘Pose’ on FX may be the most AfroLatin centered programming out right now. I don’t think I’ve ever seen that many main characters that are AfroLatina in one show.
@TwittaHoney, July 2018 https://twitter.com/TwittaHoney/status/1014260464514105349 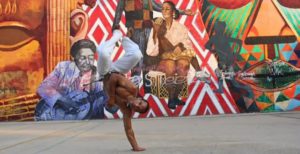 The Dance Center of Columbia College
This is significant when you consider that Spanish-language media continues to overlook Afro-Latinos for roles. Univision only recently promoted Ilia Calderón to prime-time anchor, making her the first Afro-Latina to hold the role. It’s not just that the media continues to erase this population, but it’s that it also perpetuates stereotypes.
Janel Martinez, Remezcla, February 2018 http://remezcla.com/lists/culture/instagram-accounts-highlighting-complexities-afro-latino-experience/
SEE MORE EXAMPLES

Afro-Latinx and Afro-Latin@ is commonly used by as a more inclusive, nonbinary term than Afro-Latino or Afro-Latina in Spanish.

AfroLatin@s recount to me horrible,hateful things their own FAMILY members say to them:"too dark" "bad hair" "but LatAm is "tolerant" right?

Afro-Latin frequently comes up in popular media in discussions about the racism and colorism such persons face—but also by Afro-Latin people very proud of their identity and heritage.

#MovementMondays This is Laz Alonso. He was born in Washington DC of Afro-Cuban descent. You can find him currently on The Mysteries of Laura on NBC and in many movies including Avatar, Fast and the Furious, Miracles of St. Anna. He has been quoted saying "I have a Cuban influence from my ethnicity, so I feel 100 percent Cuban and 100 percent Black and nobody can take that away from me." In this country there has been an on going conversation about encompassing the Latino Community in one vision but that's impossible because we come in all different shades and sizes, with different traditions, different slang and different life experiences. It's not about understanding every little detail about the vast Latino communities but instead understanding that we have ancestry everywhere and are capable of looking many different ways and that being ok and acceptable! I want to celebrate our differences and I want to use our differences in the Latino community to bring us together as one. If we can highlight what makes our individual Latino culture (Cuban, Puerto Rican, Mexican, Chilean etc) special and yet unite as a whole then we can be empowered as a solid and strong community of 55 million plus. Our Latino community includes Afro Latinos, my amazing father Gino Rodriguez happens to be an Afro Latino. Pictured above is Laz Alonso, a phenomenal actor that can navigate through two different cultures and has the ability to celebrate and find pride versus limitations in both! Other Afro Latinos we have seen and can continue to celebrate include and are not limited to @zoesaldana #GinaTorres #LalaAnthony #ChristinaMilian #LaurenVelez tag your favorite Afro Latino and let's celebrate and unite via our many beautiful faces!

This is not meant to be a formal definition of Afro-Latinx like most terms we define on Dictionary.com, but is rather an informal word summary that hopefully touches upon the key aspects of the meaning and usage of Afro-Latinx that will help our users expand their word mastery.