What does elbow bump mean?

An elbow bump is an alternative to such gestures as a handshake or hug. It involves two people tapping their elbows together, and is especially done in greeting or parting to avoid getting or spreading a contagious disease.

In other words, an elbow bump is a fist bump, but with the elbows. The term—and act—of an elbow bump became prevalent during the early stages of the 2020 COVID-19 pandemic.

For health, safety, and medical emergencies or updates on the novel coronavirus pandemic, please visit the CDC (Centers for Disease Control and Prevention) and WHO (World Health Organization).

Where does elbow bump come from? 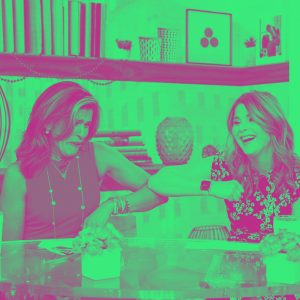 As a practice, public health officials and medical experts may promote the elbow bump because many contagious diseases can easily spread from the hands, which come into contact with a lot of germs. That’s why regular and proper hand-washing is so vital during an outbreak.

Knowing what makes a disease contagious matters more than ever. Learn why in our article “Contagious” vs. “Infectious”: The Difference Can Be Important.

In the context of disease, elbow bump spreads in the 2000s. In 2006, the World Health Organization (WHO) notably promoted using elbow bumps instead of handshakes to slow the spread of bird flu that had broken out at the time. In 2009, the use of elbow bump on social media increased dramatically after CNN medical reporter Dr. Sanjay Gupta strongly encouraged the “el-bump” (a sometime play on elbow bump) amid swine flu. Elbow bump saw a continued increase with subsequent outbreaks, including Ebola in 2014.

And both as a term and practice, elbow bump proliferated during the initial phase of the devastating 2020 COVID-19 pandemic. Major public figures adopted the gesture and an unofficial emoji was even designed for the move—both indicating just how much the pandemic changed our social behaviors. (The so-called “footshake,” where two people tap their toes together, was another handshake substitute that emerged under COVID-19.)

Did my first elbow bump in place of a handshake today. Have to say, I quite liked it. pic.twitter.com/BbrmtRsXCj

But, as cases of COVID-19 swelled around the world, scientists better understood how easily the virus can spread through the air. So, by March 2020, elbow-bumping gave way to social distancing, with public health officials advising a distance of six feet between people. WHO Director-General Dr. Tedros Adhanom Ghebreyesus specifically warned people that even the elbow bump could be risky, and urged people to instead greet each other from several feet apart without touching at all.

– When greeting people, best to avoid elbow bumps because they put you within 1 meter of the other person. I like to put my hand on my heart when I greet people these days.

As discussed above, elbow bump has seen spikes in use following disease outbreaks.

Went to see U.S. temporary base in Dakar for #Ebola response. The General gave me an "elbow bump" as recently back from #Liberia

Sam's volleyball team is using the H1N1 elbow bump to shake hands with the other team. They're hip enough to make it look cool.

Elbow bump saw a particular surge in the early months of 2020 during the initial stages of the COVID-19 pandemic. The spread of the practice, which was a new behavior to many people, was sometimes met with wry observations.

Greeting somone with an elbow bump always make me laugh.

Weddings in 2021… you may now elbow bump the bride.

Outside the context of epidemics, uses of elbow bump as a ritualistic greeting or show of solidarity are rare.

Did Dan and Demetria just elbow bump to give props a funny anchor person joke?

This is not meant to be a formal definition of elbow bump like most terms we define on Dictionary.com, but is rather an informal word summary that hopefully touches upon the key aspects of the meaning and usage of elbow bump that will help our users expand their word mastery.