What does Flying Spaghetti Monster mean?

Where does Flying Spaghetti Monster come from? 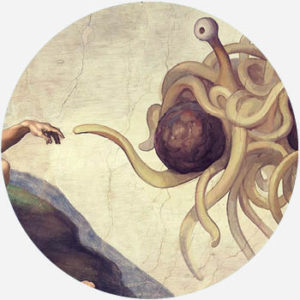 In 2005, Bobby Henderson, then an unemployed physics graduate, proposed in an open letter that the world was created by a deity made of pasta, the Flying Spaghetti Monster. The open letter was a response to the Kansas School Board’s decision that schools be allowed to teach Intelligent Design, the idea that the world was created by some intelligent higher power, in science classes. In Henderson’s open letter, he argued that that students should also be taught the “alternative theory” that the Flying Spaghetti Monster created the world.

Henderson posted the open letter to his personal website, which received over 14 million hits in the following weeks. Three members of the Kansas School Board wrote letters of thanks to Henderson, while one member wrote to rebuke him. Soon supporters started producing art depicting the Flying Spaghetti Monster and describing encounters with the being. 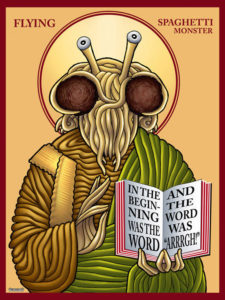 Courts around the world have attempted to tackle this question as well. In New Zealand, Pastafarians are now allowed to officiate marriages. A Texas Pastafarian was given permission to wear a pasta strainer on his head as “religious headgear” in his driver’s license photo, but a New Jersey man was denied the same request.

'In the Church of the Flying Spaghetti Monster we have religious headware as well but we’ve had to fight for the right to wear it .

He recognized the point when his neighbor, a militant atheist who sports a pro-Darwin bumper sticker on her car, tried recently to start her car on a dying battery. As she turned the key, she murmured under her breath: 'Come on Spaghetti Monster!'
Justin Pope, “Pasta monster gets academic attention,” NBCNews.com, November 16, 2007
FSMism contains a serious argument—but that does not mean that the trappings of the satire used to make that argument are entitled to protection as a 'religion.'
“Cavanaugh v. Bartelt,” United States District Court for the District of Nebraska, April 12, 2016
You might say that because science can explain just about everything but not quite, it`s wrong to say therefore we don’t need God. It is also, I suppose, wrong to say we don’t need the Flying Spaghetti Monster, unicorns, Thor, Wotan, Jupiter, or fairies at the bottom of the garden.
Richard Dawkins, “The Church of the Non-Believers,” Wired, November 1, 2016 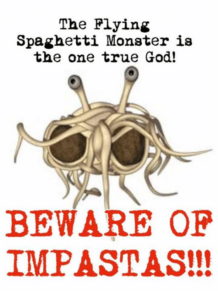 Yeah the Atheism hashtag gets intense doesn't it? I only occasionally chime in on those threads. Usually a waste of time but can help sharpen the wit sometimes.
Just remember, the flying spaghetti monster loves you.
May the sauce be with you, R'amen. pic.twitter.com/vYeUnGdRIY

In a more light-hearted vein, non-believers may, tongue-in-cheek, call on the Flying Spaghetti Monster in lieu of a traditional higher power.

May, He bless us on this holy, of holy days. #Friday
Praise be His noodly goodness. 🙏#FlyingSpaghettiMonster 🍝#Pastafarian pic.twitter.com/K6LnpyrRVO

Intelligent Design advocates naturally reject Henderson’s criticism. One pastor referred to the parody offered by the Flying Spaghetti Monster as a “cheap shot.”

THE FLYING SPAGHETTI MONSTER IS A TOOL OF SATAN!!!