What does Festivus mean?

Festivus is the name of a secular and non-commercial holiday characterized by the raising of an aluminum pole, the serving of a dinner, the airing of grievances, and the demonstration of feats of strength.

Where does Festivus come from? 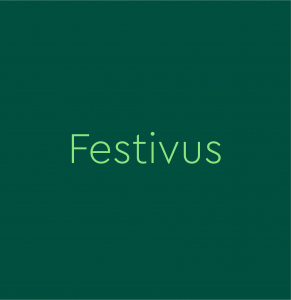 Festivus was popularized by the television show Seinfeld, in an episode that aired December 18, 1997, called “The Strike.” The episode follows the characters as they learn about and resurrect character Frank Costanza’s tradition of Festivus.

The holiday is based on a real tradition celebrated by the family of one of Seinfeld’s writers, according to a 2004 article in the New York Times. Invented by writer Daniel O’Keefe’s father, Dan, this holiday dates back to 1966. The first Festivus was a celebration of when Dan first met his wife.

Our #Lego #librarian poked around the crawl space and found the #Festivus pole. Stay tuned for airing of grievances and feats the strength. Let's rumble! pic.twitter.com/zBzudnYqrC

It almost seemed at times to be a Festivus, an airing of grievances by Donald Trump, the President of the United States.
Meghan McCain, Outnumbered (Fox News), February 17, 2017
When I share cord-striking links it becomes #festivus for people to air their #grievances on my links
alexginnyc, Instagram, March 19, 2017

Festivus is characterized as being a holiday “for the rest of us,” and exists in contrast to the commercialism of Christmas. It consists of four major elements: the Festivus Pole, which is a simple aluminum pole with no adornments; the Airing of Grievances, which is when you tell gathered friends and family members how they have disappointed you since the last Festivus celebration; dinner (the famous Seinfeld episode shows the characters eating meatloaf on a bed of lettuce, mashed potatoes, and peas); and finally Feats of Strength, which is when participants wrestle the head of the household to the ground.

The holiday has been adopted beyond the O’Keefes and the Costanzas, and is now celebrated by a small but a global audience. There is a website detailing how to celebrate it, a book about the story behind it by the holiday’s creator, and social media pages for participants to share stories of their festivities. Festivus poles can also now be purchased specially for the occasion. However, Festivus traditionalists feel that a pole made for this purpose is against the anti-commercialist spirit of the holiday.

Happy Festivus! We in #TheResistance have a TON of grievances this year, so crack out the pole, gather around and let it all out!#Festivus #Yule #celebrations #WinterSolstice pic.twitter.com/JrIvdaZWVn

My dad’s German Shepherd was chewing on his Apple TV remote and purchased $80 of Seinfeld on iTunes. It’s a Festivus miracle

The Festivus games are a real-world athletic competition aimed at all ability levels with the slogan “Feats of Strength for the Rest of Us” in reference to the Seinfeld episode.

With the win, the #Pelicans have now won five of their last six games on #Festivus, including two straight against the @MiamiHEAT #DoItBig pic.twitter.com/zoXzZ9Fu0b

Happy festivus! Can’t wait to gather around the pole and partake in the annual airing of grievances 😆 pic.twitter.com/3htC0MCalq

This is not meant to be a formal definition of Festivus like most terms we define on Dictionary.com, but is rather an informal word summary that hopefully touches upon the key aspects of the meaning and usage of Festivus that will help our users expand their word mastery.