There is no single emoji officially named after or representing the Chinese New Year, which corresponds to Lunar New Year. Instead, people use a range of emoji including the Dragon 🐉, Flag of China 🇨🇳, and Fireworks 🎆 emoji.

In 2018, Unicode 11.0 approved two new emoji—Firecracker 🧨 and Red Envelope 🧧—to help mark Chinese New Year. At the same time, it approved the Moon Cake emoji 🥮 for the Chinese Mid-Autumn Festival.

The date of Chinese New Year in 2021 is February 12. According to the Chinese zodiac, 2022 is the Year of the Ox, which can be represented in emoji form using the Ox emoji 🐂.

The date of Chinese New Year in 2022 is February 1. According to the Chinese zodiac, 2022 is the Year of the Tiger, which can be represented in emoji form using the Tiger 🐅 and Tiger Face 🐯 emoji.

Where does Chinese New Year emoji come from? 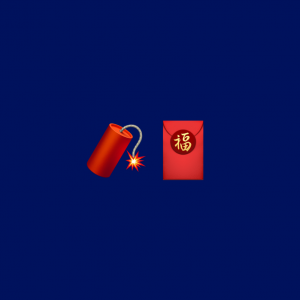 The three Chinese-holiday-specific emoji—Firecracker 🧨, Red Envelope 🧧, and Moon Cake 🥮 emoji—were approved under Unicode 11.0 and added to Emoji 11.0 in June 2018.

Since emoji are originally from Japan, many celebrate Japanese traditions and holidays. Some examples include the Moon Viewing Ceremony 🎑, the Tanabata Tree 🎋, and the Japanese Dolls 🎎 emoji, among others. And, since the Unicode Consortium is based in the Bay Area of California, home to many major emoji vendors like Apple and Google, many other holiday-based emoji tend to be Western and Judeo-Christian, such as the Christmas Tree 🎄.

The Firecracker 🧨, Red Envelope 🧧, and Moon Cake 🥮 emoji are the first to explicitly reference Chinese holidays—and for literally billions of people worldwide who celebrate them, they’re a really big deal. The announcement of the new emoji in August 2017 was so hotly anticipated that it led to a huge spike in search interest for the phrase Chinese New Year emoji during the next Lunar New Year in February 2018. Representation matters.

These things don’t happen in a vacuum: prior to the Unicode release announcement, several third-party apps made up for the lack of actual Chinese New Year emoji (and Lunar New Year celebrations in other East Asian cultures) by making Chinese-holiday-themed stickers and icons available. 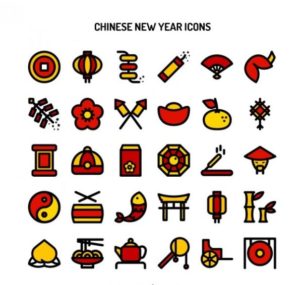 Those who chose not to use sticker packs tended to make do with existing emoji, like the Dragon 🐉, Flag of China 🇨🇳, or Fireworks 🎆 emoji. The need and desire for Chinese holiday emoji was definitely there for a long time.

Chinese New Year is just around the corner, and we are pumped to be able to still celebrate. We’re providing multiple seatings / Lion Dance show times to ensure safe spacing while ringing in the the Year of the Ox! Make your reservations ASAP 🧧 🐂
@phateatery, January 25, 2021
Someone sent me a Chinese New Year emoji chain text so it’s proof that those texts are inclusive and unite us all during every holiday
@ChristinaMartha, February 16, 2018

Other times, you’ll see people making reference to emoji that they perceive as being related to Chinese/Lunar New Year, regardless of whether they actually are (and it happens during all times of year).

Unfortunately, this leads us to a less-fun usage. Oftentimes, you’ll see people describing just any emoji that are related to Asian culture, regardless of any links to Chinese culture, specifically. This comes, for better or worse, from ignorance.

OK, so which emoji actually do fit into the Chinese New Year emoji category? How do you … not be that person? As always, it’s best to start by understanding the context of Chinese culture:

Firecrackers (🧨) are significant to a lot of Chinese celebrations in particular. Long story short, the color, noise, and flame are all traditionally believed to scare away evil spirits. They tend to be set off en masse at Chinese special events (like weddings and new year celebrations). The existing Fireworks emoji 🎆 also fits this theme perfectly.

Red envelopes (🧧) tend to be exchanged for momentous occasions like weddings, graduations, birthdays, and major holidays, usually with a couple of dollars or coins inside. Or, some candy if you’re cash-strapped.

Both firecrackers and red envelopes are symbols of good luck. So, it makes sense that Chinese people would want to exchange them in emoji format with far-flung loved ones.

The color red is another lucky symbol. Legend has it that a particular shade of bright red helped scare away a monster terrorizing ancient China, and so wearing red for Lunar New Year is now a good luck practice. People sometimes share red emoji like the Red Paper Lantern 🏮 or Red Circle 🔴.

The New Moon emoji 🌑 is perfect for making niche references. Lunar New Year is the first new moon after the winter solstice.

The Dumplings 🥟 and Money Bag 💰emoji both represent financial luck for the new year. The bag of money is clear enough. The dumplings are a symbolic food because they look like, well, bags of money.

Because Lunar New Year is a time of cultural pride for many people of diverse Asian heritage, you’ll sometimes see shares of flag emoji representing people’s nations of ancestry, from the Chinese flag for Chinese New Year as we’ve seen or the Flag of Thailand emoji 🇹🇭 for Songkran, Thai New Year.

Finally, let’s talk about the Moon Cake emoji 🥮. Despite its lunar name, the moon cake is not traditional to Chinese New Year, enjoyed instead during the Mid-Autumn Festival, usually around September or October.

The more you know!