Don’t be tricked. 8=D is not a smiley: It’s an emoticon depiction of a penis.

Where does 8=D come from? 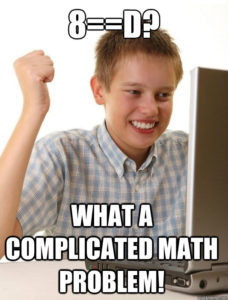 8=D is a penis made with typographical symbols, the emoji precursors known as emoticons. These date back to the 1980s, often credited to a Carnegie Mellon professor, Dr. Scott Fahlman, who proposed in 1982 the classic smiley :-) to indicate something content was joking in a digital message and :-( when it wasn’t.

While emoji largely usurped emoticons by the 2010s, there has never been an official Unicode representation of a penis. Users are resourceful, however, and so many took to the eggplant emoji (🍆), among other phallic emoji foods like banana (🍌) and hot dog (🌭) , to continue the legacy of 8=D. 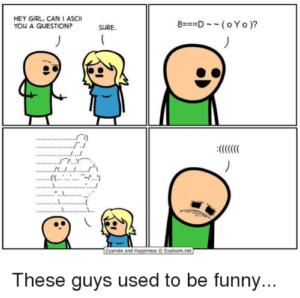 8=D stills sees occasional use online and in text messages as a stand in for “penis,” often for humorous, sexual, or even just downright random ends.

Girls who mention "he has a small dick" while her and her bf broken up, but u see they back together..😂 Sis, either u lyin or u like it 8=D

Occasionally, additional equals signs are used to lengthen the intended penis, e.g., 8====D. Some even add others symbols, like the tilde, after the D to represent ejaculation, e.g., 8===D~~~.

Are they soft enough for Simons 8===D

Some old-school internet users and anti-emoji hipsters may or reference 8=D for nostalgic effect.

No one hates the eggplant emoji more than this guy: 8===D .

This is not meant to be a formal definition of 8=D like most terms we define on Dictionary.com, but is rather an informal word summary that hopefully touches upon the key aspects of the meaning and usage of 8=D that will help our users expand their word mastery.