What does disco stick mean?

🎶 Let’s have some fun, this beat is sick / I wanna take a ride on your disco stick. 🎶

Disco stick is a colorful euphemism for “penis” from the 2008 song “Love Game” by the equally colorful Lady Gaga.

Where does disco stick come from? 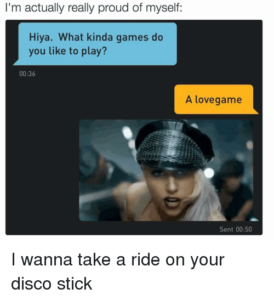 Disco stick is a lyric in the Lady Gaga song “LoveGame.” The single, which climbed #3 on Billboard charts in 2009, is about love, dancing, fame, and sex.

Lady Gaga told Rolling Stone that disco stick was one of her “very thoughtful metaphors for cock.” She said she came up with the term on the spot while in a nightclub (disco) and told a dance partner she was attracted to (stick) “I wanna ride on your disco stick.” The next day she said wrote “LoveGame” in the studio in just four minutes.

Whenever Gaga performs the song, she carries an actual light-up, rock-candy-esque scepter to represent a disco stick, as featured in the video for “LoveGame.” The design changes each year and has included a star on top. Disco stick has inspired LED accessories, adult toys, and even a highlighter pen.

Outside the US, the song was a smash hit from Israel to New Zealand and inspired many remixes, including one featuring Marilyn Manson, all helping to spread disco stick as a slang term for “penis” among her Little Monsters.

Lady Gaga trades in her disco stick for a country hat on ‘Joanne’
Adesh Thapliyal, The Daily Californian (headline), October, 2016
1 week into dating you and you made me happy, 10 months into our relationship and I’ve completely forgot how being on my own is like <<<3 🤧 / hey, let me take a ride on your disco stick 🤪❤️
@alyssaaleanne, September, 2018

Most uses of disco stick are in reference to Lady Gaga. Fans will reference the song, her spectacular outfits, and her fame when mentioning disco stick—and often without sexual suggestion.

In 2008 a girl from New York City once decided that pop music will never be low brow. She put on her LCD glasses, raised her disco stick, created the most powerful body of work and started a revolution. 10 years later her prophecy is fulfilled. This girl has won. #TheFameTurns10 pic.twitter.com/yDQqorXZgO

More specifically, Lady Gaga has become an LGBTQ icon. The disco stick has become a symbol of that empowerment.

People will also use disco stick, as Lady Gaga originally meant it, to refer to a penis but with fun flare. Sometimes, it will be in a sexual way, often quoting the song.

cock is too nasty and aggressive

disco stick is the perfect balance of both. https://t.co/s5OQSsOx4B

when he lets you ride his disco stick pic.twitter.com/oQkE95IFpt

me in middle school: did you know that when lady gaga says “disco stick” she means penis

This is not meant to be a formal definition of disco stick like most terms we define on Dictionary.com, but is rather an informal word summary that hopefully touches upon the key aspects of the meaning and usage of disco stick that will help our users expand their word mastery.