Not only are little green people out there, they’re watching us. They’re keeping their distance … but through the use of a fancy and futuristic satellite dish beyond human comprehension they’re watching our media to glean further information about us. 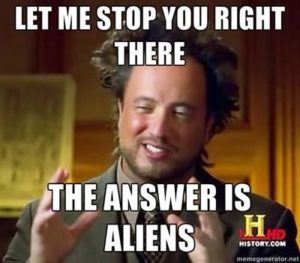 If this were true can you imaging what would they think? Scary thought. Understandably, you’re probably too busy to consider such hypotheticals. Not to worry, here at Dictionary.com, we’ve got more than enough spare time. We did the thinking for you, and here’s the words we came up with that we’re pretty sure aliens would use to describe us.

Housewives sipping wine at noon on a Tuesday? Models moonlighting as realtors in New York’s luxury housing market? Debauched escapades of restaurant staff in Hollywood. The travails of a South Carolina dandy trying to find love? What do they all have in common? Answer: They’re all programming on Bravo. They’re all part of the reality TV universe and all of it is preposterous.

Yes, we humans have become inured to the fact that reality TV looks nothing like reality. However, the genre is at an all-time high, and those watching from afar wouldn’t be wrong if they concluded that our days are frivolously spent pursuing impractical ends. If the aliens happen to be reading this (long shot), understand it’s not all of us. We promise.

Partisanship, the great scourge of our time. We’ve got two political parties constantly barking at each other, and on top of that we’ve got a cavalcade of twenty-four-hour news networks solidifying the positions of either side. We can’t come together on healthcare. We can’t raise a debt ceiling. We’re unable to agree on a name for a post office. And, worse still, we can’t even agree on something so simple as what constitutes a basic fact. Sadly, we are a hyper–partisan breed.

Yes, we’ve got a pretty good feeling about this one. The aliens are probably scratching their heads over our civic behavior. As evidence, we’d likely point to the fact that they’re able to monitor us in the first place—so at least they can agree on a budget plan capable of funding such a powerful surveillance apparatus.

“The truth is out there.” You read it, and immediately, you know what it is, the slogan for the long-running Fox hit The X-Files. The show ran nine seasons, and was the longest running sci-fi program in history . . . and now it’s back. Also, that’s just the tip of the iceberg. On the History Channel, Ancient Aliens, twelve seasons. There’s a SyFy channel. There’s movies like Aliens, Independence Day, E.T., The Abyss, 2001 A Space Odyssey, and countless others. It’s true, we’re really neurotic about the idea of their existence.

Maybe it makes them feel important. And hey, you never know, maybe our infatuation will give them cause to go a little easier on us when they move in and become our eventual overlords.

Don’t believe us? Turn on your favorite primetime-network television show then wait for the first commercial break. Chances are high that you saw a prescription drug commercial for a product spelled with more z‘s and x‘s than you’ve used in all your school essays combined. Yes, us humans are a bunch of hypochondriacs. High-blood pressure, low-blood pressure, medium-blood pressure, doesn’t matter. Want to lose weight . . . now you can.

Nowadays, we’ve got pill for everything. Sure, we don’t know if the aliens monitoring our media have the same hypochondriac bent? We imagine they might, obsessiveness probably isn’t only a human trait.

We're profligate with our money

Ever been up late not able to sleep? We certainly have. And, there are some pretty interesting infomercials on at those hours. Also, since we assume the time change between here and a distant planet is pretty extreme, the aliens monitoring our media have probably seen those informercials too. In that case, they’re probably thinking us humans are profligate with our spending.

Yes, we’ll buy just about anything. Specialty blenders? Check. Spray-on hair? Check. Enough different brands of beauty products to moisturize the entire planet? Check. Enough commercials in a single hour of programming to put even an insomniac to bed? Most assuredly. A Vagetti? What’s that? Who knows, but we have three in our cabinets.

If we noticed it, the aliens certainly did too, and if the proverb fool and his money are soon parted is to be believed, then the aliens probably find us all a little foolish.

Humans love a good sitcom. By extension of that, any aliens monitoring our media are probably forced to watch more than a few themselves. So, it stands to reason that they have the impression that we all live in stylish apartments in major American cities. That’s right—aliens probably believe we’re all urbanites.

Most if not all of your favorite shows seem to feature a variation on this theme. Seinfeld, Frasier, Friends, How I Met Your Mother, Big Bang Theory, New Girl? They’re all city living in apartments the rest of us would die for. Side note: Nobody seems to have a job that could provide the means to pay for those types of apartments, but that’s a different story.

Just by watching our sitcoms, we wouldn’t blame aliens for thinking that the middle of the country doesn’t exist. It’d be a shame if they didn’t though. The American West has a particular infatuation with aliens. Have you ever seen all the UFO hotels in Nevada? And, don’t forget Roswell . . . .

We are extremely narcissistic

This one is pretty self-explanatory, and we’re all guilty. The pointless Facebook updates and needless bathroom mirror selfies on Instagram have become the hallmark of our age. If you’re not out on social media self-promoting you might as well not exist. We are all just really into ourselves. Hey, we’re into our words . . . can’t you see by this slideshow?

And so, what must aliens watching us watch ourselves think? First, we assume they find it rather droll. Second, they probably think we’re a narcissistic bunch. After all, by virtue of them monitoring us in the first place, it shows they have interests outside of themselves. Think about it.

We fabricate our celebrities

It’s no secret, we’re a celebrity-centric culture. Countless glossy magazines dedicated to the subject of who wore it best line the supermarket checkout counter. TMZ, Extra, Entertainment Tonight dedicate countless hours to what George Clooney had for dinner. Heck, there’s even a news channel for it (E-News anybody?). That’s right we fabricate celebrities at an alarming rate.

We think extraterrestrial life may be a little amused by our celebrity fascination. They’d probably also be amused by our conveyor-belt production of them as well. It’s as if we have a powerful celebrity industrial complex. Think about it, we’re not just content with the celebrities we have, we produce new ones at an amazing clip. Yeah, we might have a surplus problem. The aliens probably think so too.

We're a bunch of lunkheads

We think we’re clever, but upon closer inspection, the aliens are probably right, we’re a bunch of lunkheads. Just take one look around the internet for all the proof you need. Are you tired of websites featuring inane listicles? We are. Have you ever been on Twitter? We have. 280 characters of thoughts better left unsaid certainly isn’t Shakespeare. Worse still, have you ever been to the coffee shop and seen people scrolling through pages and pages of Reddit comments? The topics are about as interesting as a pile of rocks, and yet people are opining away about what a suburban dictionary might look like when they should probably go outside.

It’s true, we’re too clever by half, and we’re proud of it. Come to think of it, we might consider being lunkheads. Perhaps that’s why the aliens are content simply monitoring us rather than coming to meet us.

Word of the day
eradicate
eradicate

Home / Slideshows / If Aliens Watched Our Media, They’d Describe Us With These Words