Dropping an ice cream cone on the sidewalk. Slipping on a banana peel. Attempting to throw a water balloon at your friend but slipping and smashing it in your face instead. There’s only one expression that adequately describes these situations: epic fail.

But, epic fail isn’t the only term for these ridiculously crummy situations. The English language has all kinds of colorful sayings for when things go to s**t.

And yeah, there’s some strong language ahead. What can we say? Epic fails make us want to scream @#$%!

To start things off, we should break down what an epic fail is a little bit further. When someone spectacularly messes up at something—especially little or simple things done or shared in public, like misspelling one’s own name on an official form or getting rejected for a kiss on the Jumbotron—people might joke about it as an epic fail. The term epic fail may be due to an epic fail of translation. A 1998 Japanese video game, Blazing Star, used the humorously clumsy “You fail it!” as a Game Over message. You fail it was shortened to fail in internet slang, especially among gamers on websites like SomethingAwful and 4chan, and came to signal any failure, big or small.

If epic fail is too pedestrian for you, maybe goat rodeo will do the trick.

A goat rodeo is a slang term for “something going totally, unbelievably, disastrously wrong, and there’s nothing left to do but to sit back and watch the train wreck.” In other words, a goat rodeo is a chaotic situation or fiasco. And yes, there are also literal goat rodeos. 🐐

The work of a rodeo can be chaotic, which helped give rise to the expression. But, goat rodeos aren’t all bad. Sometimes it’s used to refer to something “wild and crazy” in a good way, like a 21st birthday bonanza or bachelor party. If it was a goat rodeo, you know it was pretty lit.

When something is worse than an epic fail or a goat rodeo, it might be better called a shitshow.

The earliest recorded evidence of shitshow dates from the 1970s. At the time, it had the connotation of something that is a mockery, a chaotic event, or a horrible situation. Over time, the mockery sense receded, making space for a shitshow as “a spectacle,” which gained prominence and nuance over the years.

A shitshow is not just something that goes disastrously wrong; it can also be something that goes wrong in an entertaining way. The importance of this distinction is tone and context. There are people who genuinely lament the existence of a shitshow, and others who are amused and excited by one. A person can also be described as a shitshow. This can refer to a one-off instance of a person blundering or being an all-around hot mess. Speaking of hot messes …

Another word for someone who is a shitshow? Hot mess. A hot mess is “a particularly disorganized person or chaotic situation.” In some uses, a person described as a hot mess is attractive but just barely keeping it together.

The phrase hot mess didn’t always describe a person or a situation. The original use was actually culinary. In the early 1800s, a hot mess was nothing more than a warm meal, especially a gloopy one. (Think mess as in mess hall, or cafeteria.) An elementary school Sloppy Joe, for example, is definitely a hot mess.

These days, though, anything that’s especially disorganized or disastrous can be described as a hot mess.

Strong language warning: Fugazi is a Vietnam-era expression that describes a situation that is seriously messed up.

Some have suggested that fugazi is an acronym standing for Fucked Up, Got Ambushed, Zipped In (to a body bag)—similar to SNAFU (Situation Normal, All Fucked Up) or FUBAR (Fucked Up Beyond All Recognition). Others have connected the word to the flame fougasse, a type of improvised explosive used during the Vietnam War.Fugazi in the sense of fucked up is most typically seen in reference to the Vietnam war.

Another, more popular military term for an epic fail that came out of ‘Nam is Charlie Foxtrot. Charlie Foxtrot is military slang for a chaotic situation—that is, a clusterfuck.

In the NATO phonetic alphabet, Charlie is used for the letter C and Foxtrot, the letter F. Together, they abbreviate the compound swear clusterfuck as Charlie Foxtrot. Charlie Foxtrot begins as a euphemism in 1960s US military slang for a poorly managed operation during the Vietnam War.Charlie Foxtrot sees everyday use by military personnel, veterans, and their social groups. Thanks to social media, Charlie Foxtrot further spread in mainstream discussions of all things that are a mess. Try Charlie Foxtrot if you want to describe chaos with a military flair without being too vulgar.

Not all epic fails are totally catastrophic. Sometimes they’re just bad luck. But, if they’re really bad, Bad Luck Brian is the meme to illustrate it.Bad Luck Brian is a meme featuring a teenage boy in a sweater vest showing off a goofy grin with braces. The text on the image describes various unfortunate, unlucky, embarrassing, and hilarious circumstances. 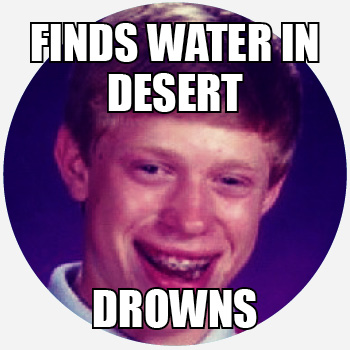 Like other memes, Bad Luck Brian tells an ironic story in a handful of words. Many of these stories focus on occurrences that the creators imagine could happen to a character like Bad Luck Brian if he were real. Some of these contain a kernel of truth that may have actually happened to whoever created a given iteration of the meme.

A (doomsday) prepper is “someone who actively prepares for worst-case scenarios, such as the end of the world, by practicing survivalist techniques, including hoarding food.” Preppers have their own lingo for when they talk about things that are really bad. Two of the most popular ones? SHTF and WROL.

Any responsible person tries to be ready in case of emergency, but only a true prepper is ready for when SHTF. That is, when shit hits the fan. The expression shit hits the fan dates to at least 1930. Shit hitting the fan refers to the ultimate consequences of something turning out, well, shitty. When problems (shit) start piling up (hits the fan)—that’s when things get real.

On a slightly less vulgar, though even more dire note, there’s also WROL. WROL stands for Without Rule of Law, doomsday prepper lingo for the complete breakdown of governance after a major environmental or other disaster. Talk about an epic fail …