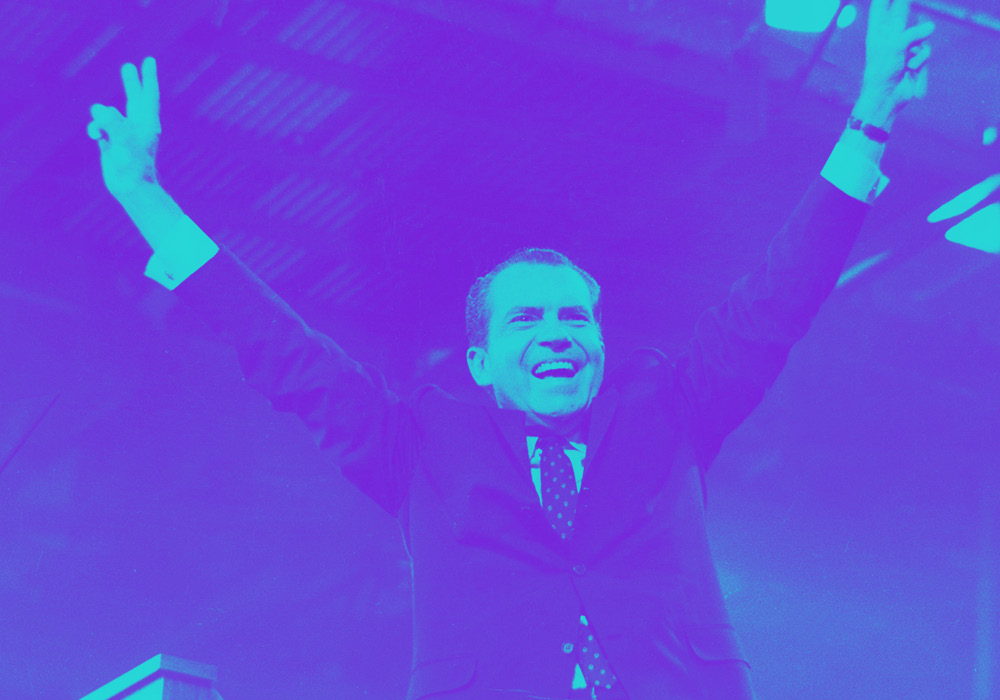 Rumor has it that George Washington said “I can’t tell a lie,” when faced with the accusation of cutting down his father’s cherry tree. The first president of the United States was just a boy when that happened, so it should come as no surprise that he wasn’t too keen on copping to the chop, lest he find himself in a world of trouble. But, as the story goes, he spoke plainly and willingly admitted to what he had done.

Of course, not everyone tells the truth all the time. Everyone from children to politicians (and apparently, even children who grow up to become politicians) lies from time to time. Sometimes they do it plainly, and make deliberately false statements with the intent to deceive, and sometimes they are a little more ambiguous about their untruths.

This list of nine tricky phrases (that aren’t quite lies) is a good example of how some people have tiptoed around the truth without actually telling a blatant lie. 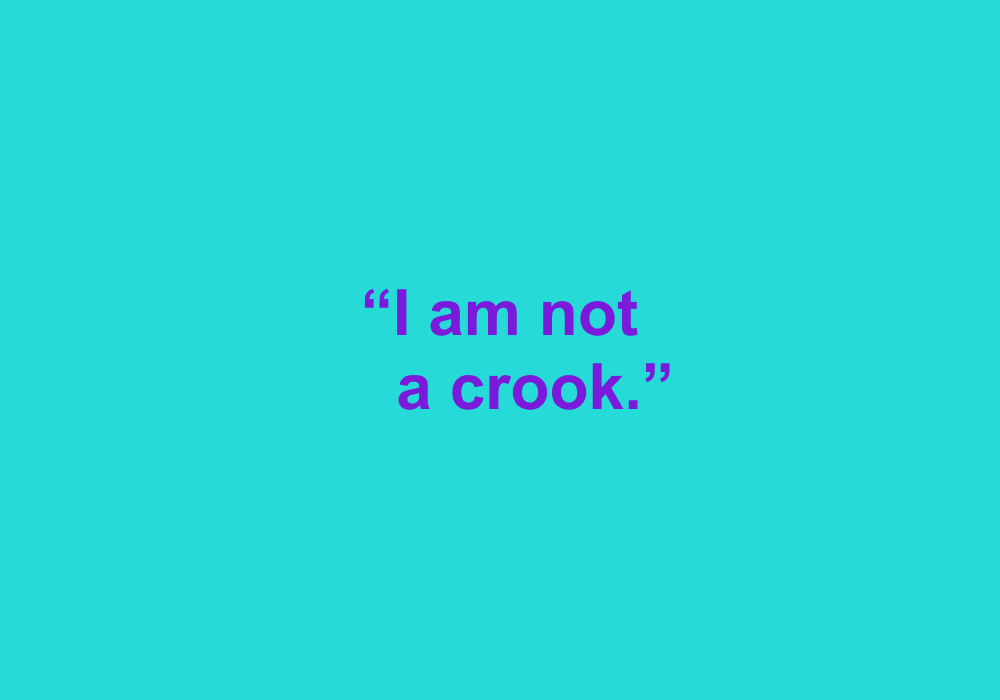 When President Nixon made his infamous declaration during a nationally televised press conference in 1973, he was doing so in response to allegations that he had been part of the Watergate scandal that involved breaking into the Democratic National Committee headquarters. Although Nixon did not say he was not lying about his involvement, he assured the American public that he could not have been part of the break-in because he was not a crook, or a thief, cheat, or swindler, in order to avoid having to face his crime.

His lie could not be contained though, and Nixon’s presidency ended in disgrace as he resigned to avoid being impeached. If you wanted to take a page out of Nixon’s book you could try using similar synonyms when confronted with the truth. As in, “Did I eat all of the cookies? I am not a glutton.” 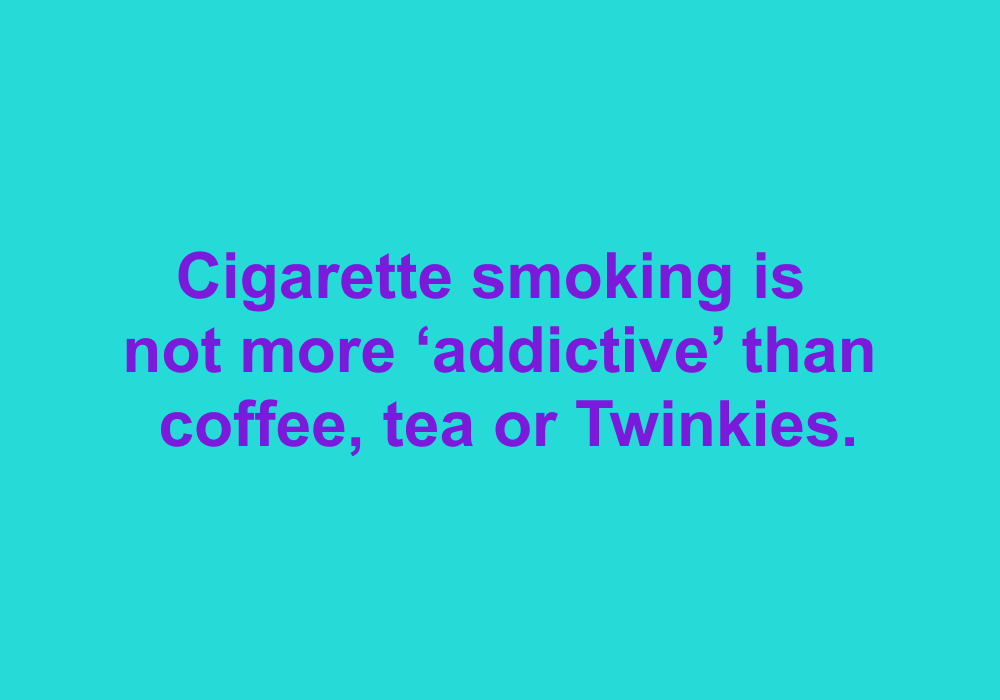 Johnston used deceptive phrasing, or words that were intentionally misleading, in his written testimony read before Congress in 1994 about the dangers and addictive nature of nicotine. While the tobacco CEO did not exactly lie in his testimony (although an argument could be made that yes, nicotine is more addictive than those other addictive substances), he deceived by comparing his company’s product to other products that are also addictive in nature.

If you were hoping to use a similar strategy when trying to get away with something, you could say, “Eating raw cookie dough is no worse for you than eating brownie batter.” While yes, that may be true (both can contain uncooked eggs, which can lead to salmonella), neither one is advised by the Food and Drug Administration.

Curious about how to describe some of these methods of lying? Read about them here. 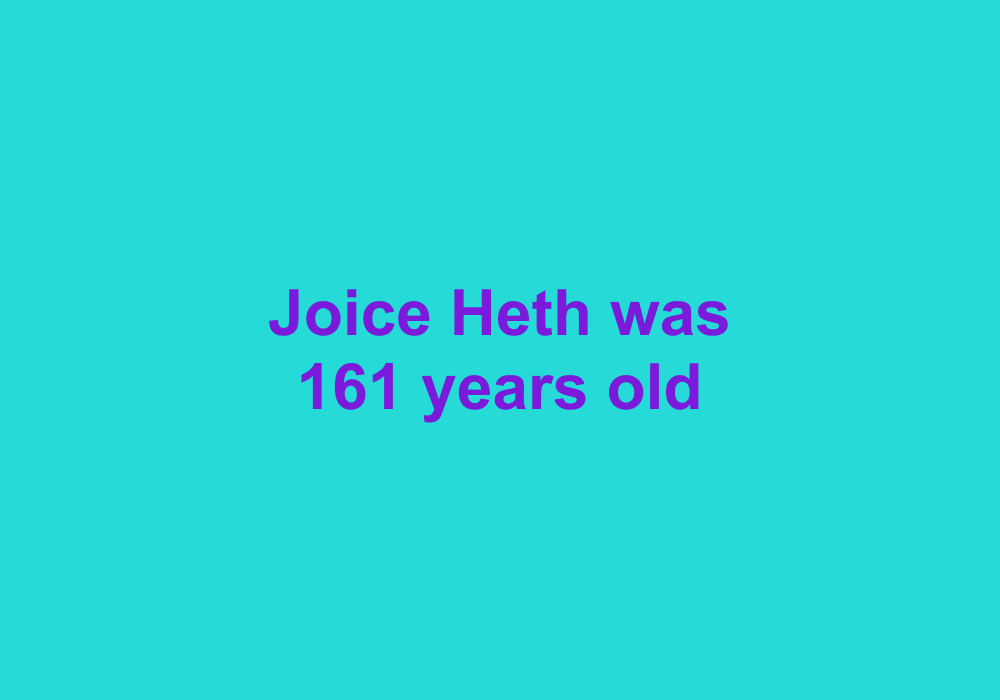 Famous circus frontman P.T. Barnum was known for embellishing ("enhancing a statement or narrative with fictitious additions") the facts in order to lure people to his shows. This was the case with 80-year-old Heth, whom Barnum claimed was actually George Washington’s (yes, “I can’t tell a lie” George Washington) nurse. He sold tickets to viewers eager to see the unbelievably old woman as well as those who wanted to hear stories about our first president.

While 80 years old probably felt like 161 back in 1835, when the average life expectancy for a woman was less than 50, the embellishment was no closer to the truth than any of his other statements (like his “Fejee Mermaid,” which was just a monkey head sewn onto a fish's body).

If you wanted to try your hand at embellishing in place of lying, you could simply exaggerate, magnify beyond the limits of truth, or overstate the truth a little bit. For example, you might say, “I spent all day writing this article about exaggerating” even if that “all day” was really only a few hours. 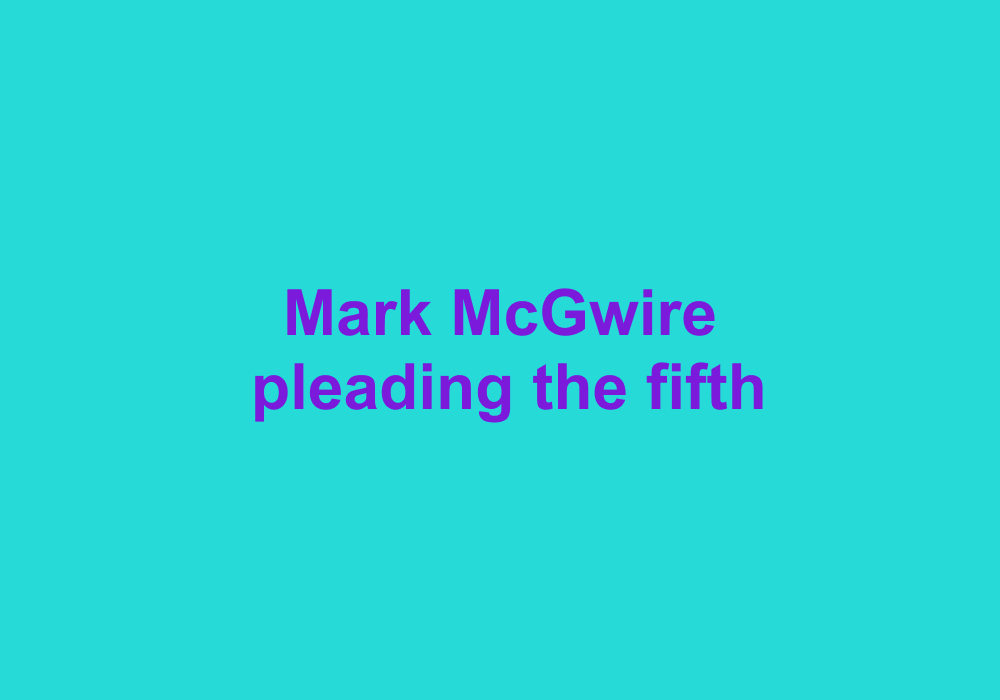 The ball player was once famously embroiled in a performance enhancing drug scandal. The 1998 home run king was accused, alongside 11 other players, of taking steroids in order to help increase their on-field abilities.

The statement, I plead the fifth is a legal term afforded to Americans by the US Constitution. Pleading the fifth allows Americans to refuse to answer questions posed in a court of law in order to avoid self-incrimination, or exposing oneself to prosecution by giving evidence or testimony. When McGwire invoked this right, he wanted to avoid the damage that admitting to ongoing steroid usage would do to both his legacy and his ability to remain in good standing with Major League Baseball officials.

McGwire is hardly the first person to ever plead the fifth. Kenneth Lay of Enron, Turing Pharmaceuticals fraudster Martin Shkreli, and many others have all responded to questions in the courtroom by using their constitutional right to not say anything that could get them into legal or moral hot water.

Although a legal phrase, it is also common slang, and people can plead the fifth in their everyday life. You have probably seen it on television sitcoms when someone asks a friend or family member a question they do not want to answer:

Your friend: “So, what do you think of my new boyfriend? He seems great, right?”
Sneaky you: “Uh, I plead the fifth.” 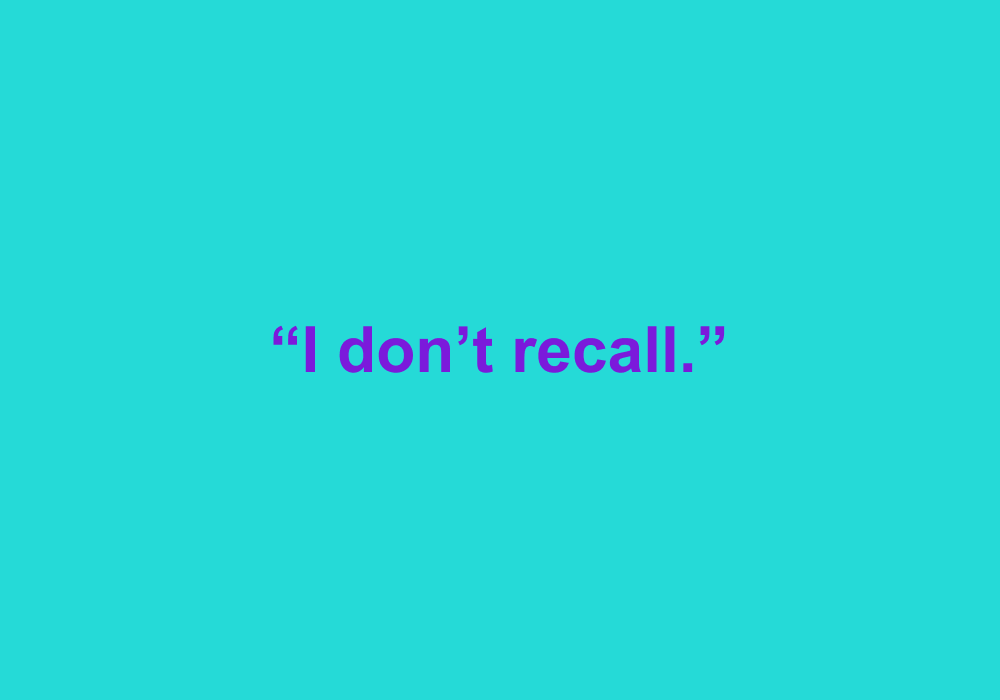 In 2007, I. Lewis "Scooter" Libby, former chief of staff to Vice President Dick Cheney, was found guilty of lying to the FBI and a grand jury, and of obstruction of justice. As part of his defense, the former Bush White House staffer claimed to not recall specifics around the leak of CIA operative Valerie Plame's identity.

Libby was not the only politico to try that method. Nixon’s aides tried it, Bill Clinton tried it, even Michael Flynn recently tried it. The “I can’t remember” defense is a popular one where, instead of lying about what may, or may not, have happened, people pretend they just do not remember the events in question. While these types of lies may seem harmless—saying that you cannot recall, or "bring back from memory, recollect, or remember," something may not seem like a big deal—it still counts as a lie if you do indeed remember it.

And pretending, or making believe, that you do not remember something in order to avoid confrontation or legal ramifications can still get you into hot water (both Michael Flynn’s and Scooter Libby’s faulty recollection of events did not keep them out of prison). But if you're dead set on not telling a lie, saying “I don’t recall” may be the easiest way to avoid telling a fib. 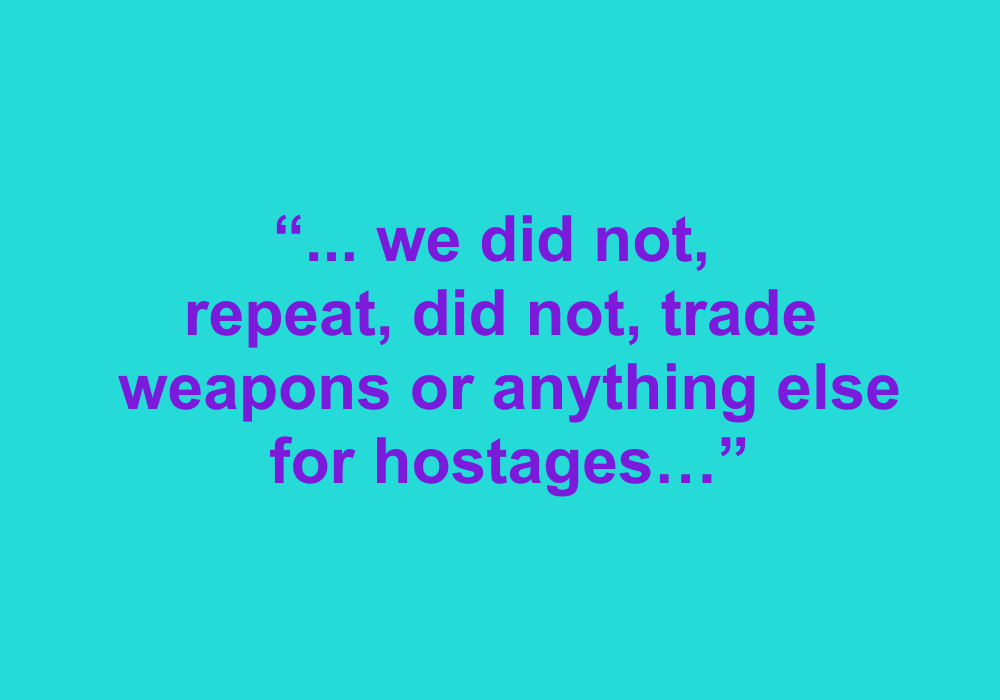 “... we did not, repeat, did not, trade weapons or anything else for hostages …” - Ronald Reagan

In 1986 President Reagan found himself in the middle of controversy stemming from the Iran-Contra deal, in which the US government illegally sold weapons to Iran. As the details of the deal unfolded, it became clear that the President had lied about the weapons that were sold under embargo, and where money from the deal was going to be used. Additionally, there was a hostage exchange between Iranian terrorists and seven American hostages, something that the US has long-standing policies against.

While the President was adamant that everything that unfolded with the return of the American hostages was above board, he later found himself having to walk back those statements on national television. He said, “My heart and best intentions still tell me it’s true, but the facts and evidence tell me it is not.”

Sure, his later statements may make it sound like the President was lying to cover up for the actions he took, but it seems like they were also his way of admitting that he had lied to himself as well.

While this doesn't apply in every case, someone who believes their own lies is often referred to as a pathological liar, or "someone who tells lies so frequently with no rational motive for doing so." 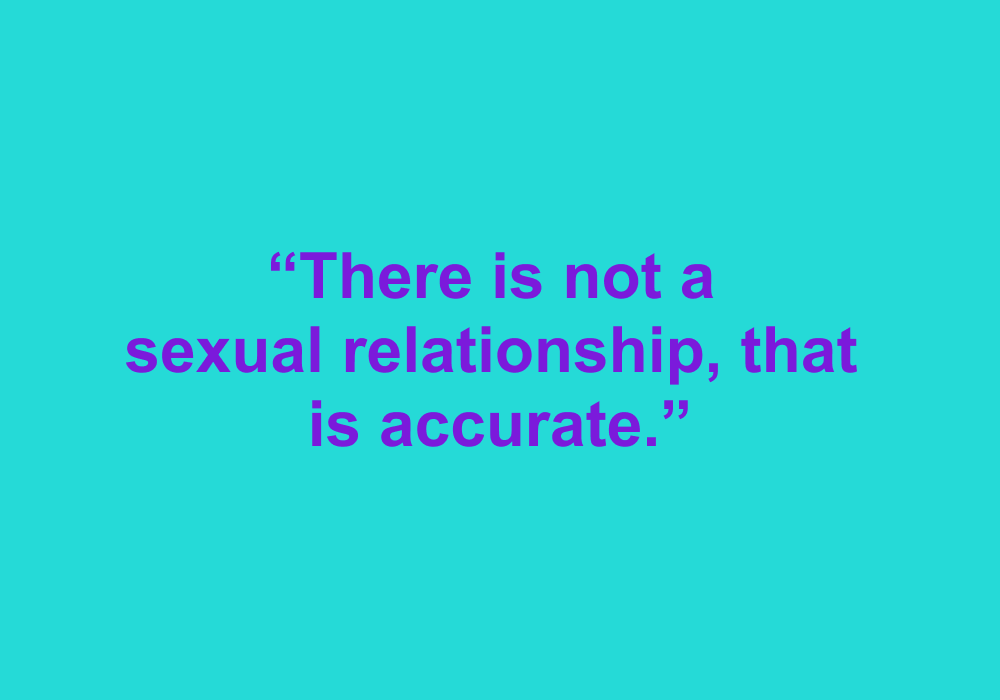 “There is not a sexual relationship, that is accurate.” - Bill Clinton

In an interview with Jim Lehrer in 1998, President Clinton told a whopper of a lie that eventually led to his impeachment. The untruth had to do with his sexual relationship with a White House intern. The then-President lied about the fact that he had been engaged in an inappropriate relationship by using the present tense (as in, “I am not having a relationship with that woman”) for a relationship that had already ended.

His insistence that he was not lying about the relationship, which he spoke of in the present tense instead of the past tense, was considered a lie by omission, or a lie based on leaving something out. He knew that by talking about the events in the present tense, he was technically telling the truth, but it was just that, a technicality. And it was one that left a mark on both his legacy and his reputation as an otherwise well-liked president.

You can easily tell a lie by omission on your own by leaving out the part you would otherwise find yourself lying about. Are you going to meet up with your best friend’s ex-boyfriend and his new girlfriend this weekend, but don't want to hurt your best friend's feelings? You might say, "This weekend I have plans to meet my friend and his new girlfriend."

You are not lying (you do have plans) but you are leaving out the part that you do not want your BFF to know about: it is her replacement that you are meeting for the first time. 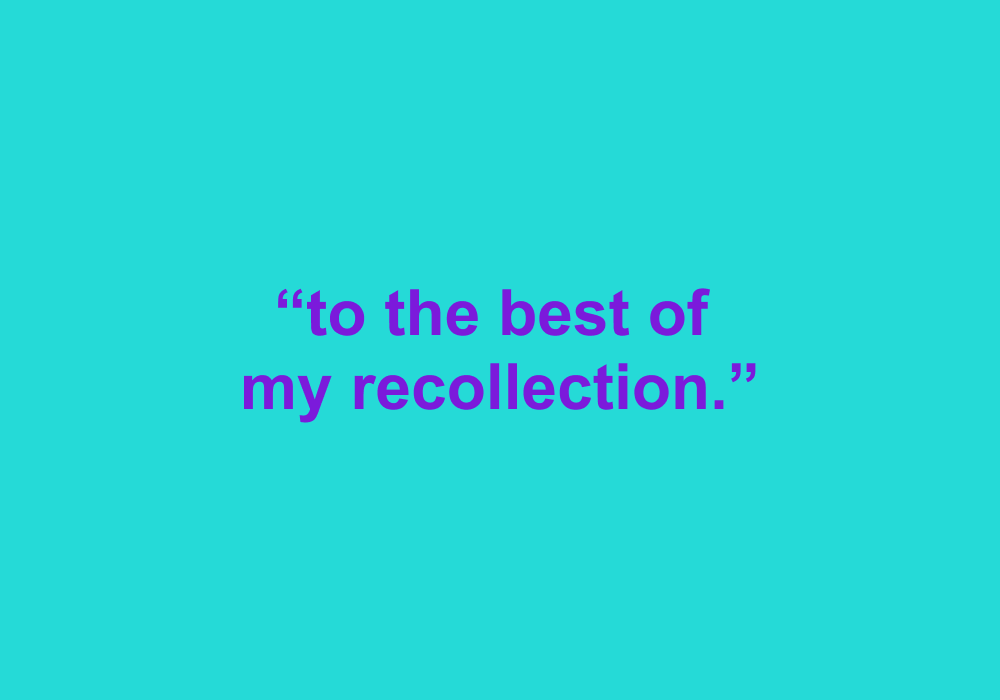 “To the best of my recollection.” - Highlights from the Congressional Record

The phrase is so widely used that it shows up multiple times in any given year of the Congressional Record, which records the debates and proceedings of US Congress. This is probably because legal experts everywhere advise their clients to use this turn of phrase to avoid lying, whether intentionally or not, by avoiding absolutes.

While we cannot give you one famous instance when this was used in the place of telling a lie, we can assure you that to the best of my recollection has been appearing in courthouses (and Congressional proceedings) for a very long time.

While we're on the topic of lies of different kinds, make sure you know the difference between misinformation and disinformation. 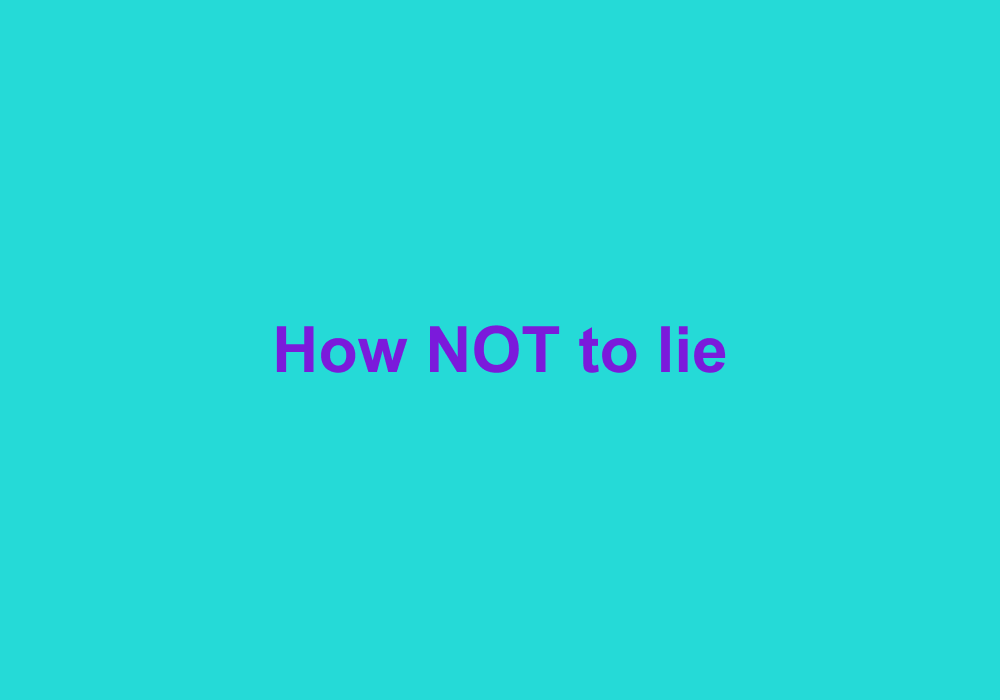 How NOT to lie

Our list has mainly covered famous lies or words to use instead of telling a lie, so we want to wrap it up with a way to avoid answering one way or another all together … deflection.

In this context, deflection, which is the act or state of deflecting or "to bend and turn aside from the true course," is when a person turns the conversation away from the direction it was heading. This is done in order to avoid having to answer a specific question.

You can deflect a question you do not want to answer simply by responding with a question of your own:

Question: "What time did you get home last night?”
Deflection: “Why does it matter?”

Question: “Where do you know them from?”
Deflection: “Why do you want to know?”

You can deflect most questions in this manner until you run out of ways to turn the question around, but if you're desperate to avoid lying, this may be your very best option. Robert Mueller is known for his ability to deflect. During his Congressional testimony, the former special counsel Mueller did not come out and say whether or not he believed the president had committed a crime, instead he deflected and used his fall-back statement, "Accordingly, while this report does not conclude that the president committed a crime, it also does not exonerate him."