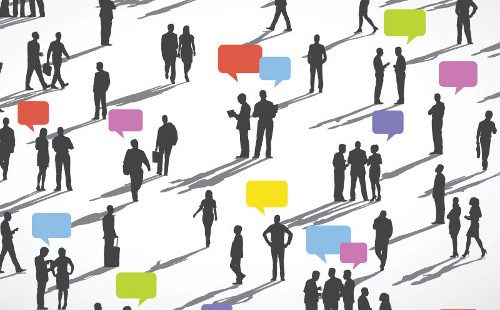 A lot of people have been throwing around words that end in -cracy and -ism for a while now. You’ve probably heard them on the news. Your friends and family have probably said them a few times. They’ve made their way into your social media feeds, too. But here’s a secret: Not everyone knows what these -ism and -cracy words actually mean. They aren’t always used correctly, and a lot of times they’re just being thrown in to scare people.

Some of these concepts are legitimately scary. It’s important to understand what they really mean, as well as the history that they reference. We’ve gathered some that we’ve been hearing lately. Conversations go a lot more smoothly when people agree on the definitions of the words they’re using. The words we choose are often the strongest tools we have, and using them accurately helps us process the world around us. 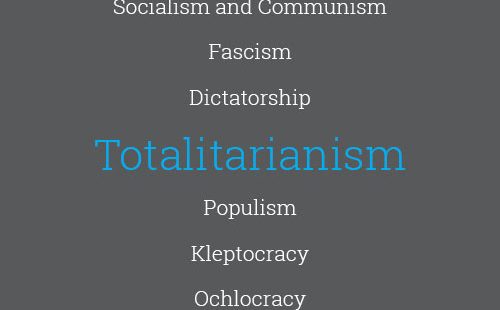 Totalitarianism is “absolute control by the state or a governing branch of a highly centralized institution.” A totalitarian government is one that “doesn’t tolerate parties of differing opinion and that exercises dictatorial control over many aspects of life.” The term was first used in the 1920s to describe fascism in Italy under Mussolini. It also describes Nazi Germany, the Soviet Union, and Francoist Spain.

One of the best examples of totalitarianism is the fictional setting of George Orwell’s 1984. In it, the nation of Oceania is ruled by a single party (called Ingsoc or just the Party) with an all-powerful, charismatic leader known as Big Brother as supreme ruler. The citizens of Oceania are under constant surveillance, even within their own homes, and have every moment of their daily lives regulated by the Party. Through constant propaganda and the creation of a new language (called Newspeak), the party controls people’s thoughts and speech. They declare any opposition to be lies created by Oceania’s enemies, and continually revise history so that nothing Big Brother says can ever be questioned. They enforce a lot of this with secret police (Thought Police), and people who fall out of favor with the Party are known to disappear and have their records erased from history. 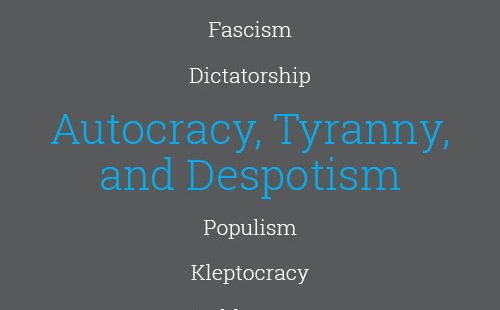 An autocrat is “an absolute ruler, especially a monarch who holds and exercises the powers of government as by inherent right, not subject to restrictions.” In other words, an autocracy is a government where one person holds absolute, uncontrolled, and unlimited authority.

A tyrant is “a sovereign or other ruler who uses power oppressively or unjustly.” A despot is “a king or other ruler with absolute, unlimited power.” Are we sensing some themes here?

Let’s talk about Yertle the Turtle, from Dr. Seuss’s eponymous short story. Yertle is the King of the Turtles, and ruling over a small pond, he considers himself the king of everything he sees. When he decides that he wants more territory, he orders a few of his turtle subjects to stack on top of each other so he can sit on top of them and see further. Let’s think about that: Yertle is the sole ruler of this turtle kingdom. Since he’s the king, we can assume no one voted for him, so he has authority by inherent right. When he calls upon the turtles to stack up so he can sit on them, they do so without arguing (at first, anyway). From that we can assume he rules absolutely, without limits or restrictions. And sitting on top of his subjects? That sounds pretty unjust and oppressive to us. So Yertle the Turtle can easily be called an autocrat, a tyrant, or a despot.

Don’t let that get you down, though. Eventually, the turtle at the very bottom of the stack speaks up about the injustice of being sat upon (and he eventually does something to literally take Yertle down). 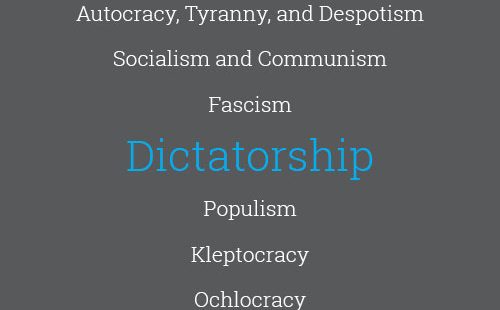 A dictator is “a person exercising absolute power, especially a ruler who has absolute, unrestricted control in a government without hereditary succession.”

We usually think of dictators as rulers who take control of a country by force, but in its original form, it was an official title for a ruler with temporary, but absolute, authority in emergency situations. Julius Caesar’s title was Dictator of the Roman Republic. These days, though, the word tends to be associated with abusive leaders with absolute, non-hereditary authority. It can even apply to leaders who seize total control and suspend civil liberties after being democratically elected. 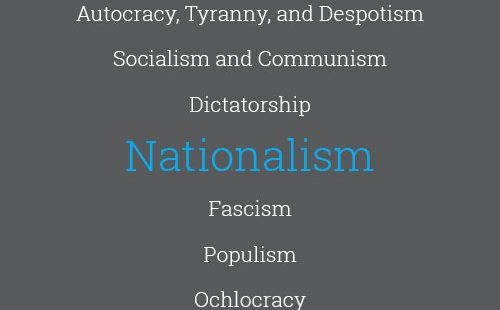 Nationalism is a spectrum. At its most basic level, it’s patriotism, but at an extreme it’s “excessive patriotism or chauvinism.” It’s also “the policy or doctrine of asserting the interests of one’s own nation viewed as separate from the interests of other nations or the common interests of all nations.”

Nationalism was the driving force behind the American and French Revolutions. Throughout history people have been known to rally behind the idea of a national identity to create new countries and to break away from oppressive regimes and occupying forces.

That said, let’s talk about that “excessive patriotism or chauvinism” definition. Chauvinism means “biased devotion to any group, attitude, or cause.” A male chauvinist is someone who thinks men are inherently better than other genders. Apply that “My group is the best group and every other group is inferior” attitude to patriotism, and it can be a dangerous thing. As one example, Hitler and the Nazis used a platform of racial and ethnic nationalism (the idea of a “master race”) to justify the genocide of millions of people. 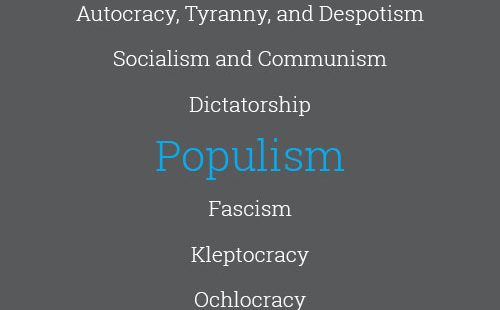 Populism is a squishy term that can be accurately applied to both left- and right-wing groups. At its core, it’s “a political movement or philosophy that offers unorthodox solutions or policies and appeal to the common person rather than according with traditional party or partisan ideologies.” It’s “representing or extolling the common person, the working class, the underdog, etc.” It’s “grass-roots democracy, working-class activism, and egalitarianism” rolled into one.

Populism has its roots in an American political party of the 1890s. The Populist party (or the People’s party) focused on the needs of farmers and the American working class while opposing the so-called “elites” whom they felt were neglecting them. The party was dissolved in 1908, but the term lives on to refer to movements and policies that serve (or claim to serve) “the little guy.” That can mean different things for different groups, but generally falls along the lines of pitting the “common working people” against the “wealthy elites.” 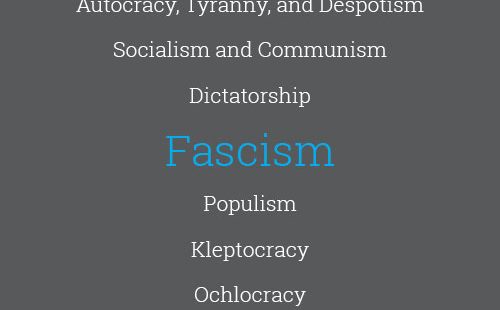 Fascism is a word that gets thrown around a lot, but whose meaning is sort of hard to pin down. Our lexicography team defines it as “a governmental system led by a dictator [who has] complete power, forcibly suppressing opposition and criticism, regimenting all industry, commerce, etc., and emphasizing an aggressive nationalism and often racism.”

In 1914, Benito Mussolini established what would eventually become the Italian National Fascist Party. Fascism gained a lot of support by framing itself with a conservative, ultra-nationalist, populist platform. Fascist leaders promised a unified Italy that was re-elevated to its status during the Roman Empire. Once Mussolini was appointed Prime Minister he quickly managed to establish himself as a legal dictator. He established a totalitarian police state, as well as a cult of personality where he alone could be Italy’s savior. Hitler was inspired by this approach, and applied a lot of it to his rule of Nazi Germany. 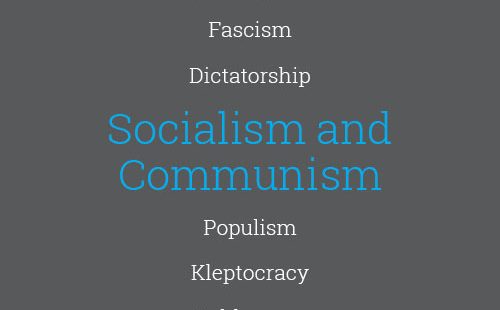 Socialism is “a theory or system of social organization that advocates the vesting of the ownership and control of the means of production and distribution, of capital, land, etc., in the community as a whole.”Communism is a branch of socialism. It’s a similar idea, where all property is owned by either the community as a whole or by the state. In practice, though, it’s “a system of social organization in which all economic and social activity is controlled by a totalitarian state dominated by a single and self-perpetuating political party.”

Our modern idea of socialism and communism tends to come from what Karl Marx outlined in The Communist Manifesto and what was later implemented in Russia by Vladimir Lenin and his followers (the Bolsheviks). Marx’s manifesto called for a complete overhaul of capitalist systems of the time. It advocated an uprising by the working class (the proletariat) against the aristocracy and other elites (the bourgeoisie), followed by the implementation of a new society where everyone was equal. That sounds great on paper, but the way it played out in Russia was a bloody revolution (including the arrest and execution of Czar Nicholas II and his family). In the 1920s, Joseph Stalin took over, and established a completely totalitarian regime. Stalin’s government was marked by widespread famine, poverty, and death.

Modern-day Russia is neither socialist, nor communist. That ended in 1991. However, today, North Korea self-identifies as socialist, and operates in a very similar way to Stalin’s USSR. China went through a Communist revolution not long after Russia did, and today they self-identify as “socialist with Chinese characteristics.”

It’s not all doom and gloom, though. Many Nordic countries operate as social democracies. This means they blend a lot of “socialist” policies (like providing state healthcare, social security, and worker’s compensation) with certain “capitalist” features (like private property and the democratic process). 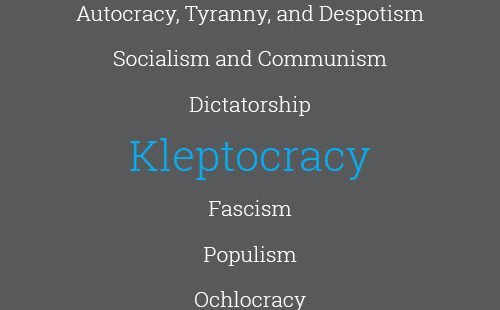 A kleptocracy is “a government or state where those in power exploit national resources and steal” or “rule by a thief or thieves.” This can mean a lot of things, from outright profiting off of one’s position as head of state to sapping the natural resources of a country during one’s term.

The prince in Disney’s Robin Hood is a good example. He taxes his poor subjects so heavily that they can barely afford to eat, mainly because he wants to amass wealth for himself. The prince doesn’t care how the peasants are doing. He has the Sheriff of Nottingham shake them down for every last bit of gold they might be hiding. That guy’s a jerk. 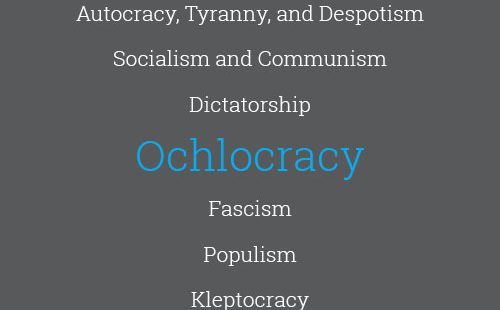 The best way to describe ochlocracy is “mob rule.” So what’s a mob? The word has a lot of meanings, but the most significant ones in this case are “a disorderly or riotous crowd of people,” “the common people; the masses; populace or multitude,” or “a group of persons stimulating one another to excitement and losing ordinary rational control over their activity.”

One of the best examples of this is the Salem witch trials, where widespread panic led to quick judgements based on majority sentiments with flimsy evidence. 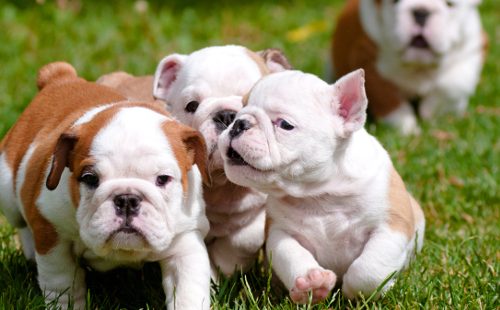 Okay, that was tough to get through. Good job. Please enjoy this picture of some puppies.

Home / Slideshows / What’s The Difference Between “Cracy” And “Ism” In Government?