Perhaps even more astonishing (or alarming), the internet has changed how we think. Who needs to stash away names and dates into our longterm memory, for instance, when we have Google? And, guess what, that phenomenon has a name!

Here are nine terms that showcase the colorful and curious psychology of the internet.

Remember when we actually had to … remember stuff? The Google Effect explains how people tend to use the internet as a personal memory bank (i.e., they can’t remember any information on their own without looking it up). It’s also sometimes called digital amnesia.

And you want to know why we’re not leaving Facebook? Well, how else would we remember people’s birthdays?

Rules of the Internet

Are you obeying the Rules of the Internet? Don’t worry, they aren’t enforceable by law. They are “a series of humorous principles about internet culture as it was in the early 2000s.” That is, very crass and boyish, with lots of anime, gaming, and sexism mixed in.

Or Rule 39: “One cat leads to another.” This one jokes about much we love watching cat videos.

And then there’s Rule 1: “Do not talk about rules 2-33.” This one highlights the absurdity of internet humor—and likely alludes to Fight Club.

How is that we all got this quote wrong? Some pin it on something called the Mandela Effect. This refers to “when a large number of people share a false memory, originally attributed to the existence of multiple universes.”

Why Mandela? In 2013, the former president of South Africa and anti-apartheid revolutionary Nelson Mandela died at age 95 of a respiratory infection. Yet in 2010, paranormal writer and researcher Fiona Broome recalled having memories of Mandela dying during his imprisonment in the 1980s. At an event called Dragon Con that year, Broome discussed this topic with a security manager and found that many others shared the same false memory. They dubbed it the Mandela Effect.The Mandela Effect gained popular attention in 2016 thanks to a viral story about the children’s book series the Berenstain Bears. As discussed as early as 2012 on a blog post, many people had believed that the bear family’s surname was always spelled Berenstein, with three E’s. Some believers in the Mandela Effect suggested their collective alternate memory pointed to parallel realities, home to a Berenstain family and a Berenstein one.

In 2016, Australian cartoonist Ben Ward tweeted about a keen observation about internet psychology in a fictional scenario he imagined about a character he called Milkshake Duck: 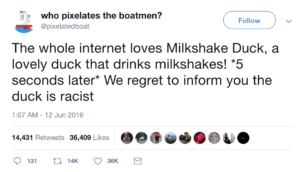 A Milkshake Duck is “a person (or thing) who becomes extremely popular on the internet for some positive reason, but as their popularity takes off and people dig into their past, they quickly become an object of outrage and hatred.”Milkshake Duck perfectly captures how we so quickly heroize, then vilify, people online. Like Ken Bone. Bone and his bright red sweater shot into unlikely fame after he asked an earnest question to the US presidential candidates during a debate held in October 2016. He immediately became an internet celebrity, but as past, unsavory Reddit comments came to light, Bone’s fans soon turned on him.

Named after a 2015 tweet from provocative conservative political commentator Ann Coulter, Coulter’s Law states that “the longer it takes the news media to identify a mass shooter in the United States, the less likely it is to be a white male.” 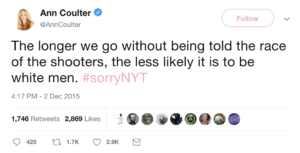 Those who use Coulter’s Law tend to align with Coulter’s xenophobic ideology. Typically, these internet commentators will write such as things as Coulter’s Law is in effect when mainstream media do not disclose the racial identity of a shooter in the hours following news of a mass shooting. The idea here is that, according to people who believe the mainstream media is liberal, reporters deny evidence that might confirm conservative fears of Islamic terrorism in the US.

Speaking of xenophobia, it can’t always be easy to tell who is or isn’t bigoted because of the subject of our next slide: Poe’s Law.

Irony is the lifeblood of the internet. Problem is, it can make it hard to tell fact from fiction, jokes from genuine beliefs.

This predicament is something called Poe’s Law. Though originally created to refer to creationists, the law has been applied to extremist viewpoints on atheism, capitalism, communism, environmentalism, feminism, and other hot-button topics. The idea is that fundamentalist or dogmatic views can become so extreme, despite their acceptance, that even parodies of these views are unmistakable for the real thing, to the point that extremists may accidentally embrace a parody as truth.

The converse can also be true; sometimes a person’s actual views are so extreme that another misinterprets these views as a parody. This is sometimes referred to as Poe’s Corollary, which was applied to Men Going Their Own Way, a group of men who (bitterly) swear off all interactions with women. Though some have believed the site to be a parody, it’s a genuine movement.

Also known as Godwin’s Rule of Hitler Analogies, Godwin’s Law is the proposition that “the longer an internet argument goes on, the higher the probability becomes that something or someone will be compared to Adolf Hitler.”

It’s an update of the logical fallacy reductio ad Hitlerum (“reduction to Hitler,” like “playing the Nazi card”), coined by philosopher Leo Strauss in 1951. The principle describes “the act of discrediting an opponent’s view by comparing it to something supported by Hitler or Nazism.” The move is seen as a sign of desperation or intellectual laziness.

Lean in close. We’re going to whisper this one. ASMR, or Autonomous Sensory Meridian Response, is “a calming, pleasurable feeling often accompanied by a tingling sensation.” This tingle is said to originate in a person’s head and spread to the spine (and sometimes the limbs) in response to stimulation.

The stimuli that trigger ASMR vary from person to person. Some of the most common ones include whispers, white noise, lip smacking, having a person’s complete attention (as in having one’s hair cut by a hairdresser), as well as brushing, chewing, tapping, scratching, whispering, and crinkling.

What does this have to do with the internet? Since 2010, there’s been a massive uptick in videos created online that attempt to trigger ASMR. A person who creates ASMR content is called an ASMRtist. During the 2019 Super Bowl, Anheuser-Busch aired an add featuring an organic Michelob Ultra, Zoë Kravitz, and, for many, lots of ASMR-inducing sounds.

The internet can really take on a life of its own. Which is why you might want to watch out for Slender Man. He’s a fictional creepypasta character depicted as an unnaturally tall, thin, spectral man with a featureless white face and a black suit and tie, sometimes with long black tentacles.

The history and mythology behind the Slender Man character has branched off in various directions since its internet conception, and his intentions are always left mysteriously vague, but the Slender Man stories most frequently involve the stalking, kidnapping, brainwashing, or murder of children.

The internet myth came to much more widespread public attention in 2014 with what is now known as the “Slender Man stabbings,” describing an incident in which two 12-year-old girls lured a classmate into the woods and stabbed her 19 times, supposedly to impress Slender Man and protect their own families from him.