Feedback
Previous Where Did The Word "Vegan" Come From? Next A Brief History Of The Letter H

We had the opportunity to sit down with Will Shortz, the editor of the New York Times’ Crossword Puzzle and NPR’s Puzzlemaster. Learn about the history of the crossword and how it’s intertwined with the dictionary.

Dictionary.com:
You’ve said before that you’re a crossword traditionalist. What is a traditional crossword and who shaped crosswords as we know them?

Will Shortz: Well, I guess if I have a hero in the crossword world, it would be Margaret Farrer who was the co-editor of the first crossword puzzle book in 1924, and she was the Times’s first crossword editor, from 1942 to 69. The puzzles that she published had a classical elegance to them and I like crosswords that have a simplicity and a classical elegance to them as well. Of course, crosswords have moved beyond her time and I don’t think she would approve of everything that I’ve done with the Times’ crossword, but generally speaking, I think crosswords should be based on regular vocabulary that is professionally and elegantly interlocked, with lively themes and fresh, colorful clues. That’s the basic definition of a good crossword.

D:
Other than the crossword, what’s your favorite kind of puzzle?

WS: I like just about any kind of puzzle. My favorite kind of puzzle overall would probably be a cryptic crossword, which is the British style. There are some American publications that publish crosswords in the British style but using American vocabulary. Other than that… I like Sudoku. I love KenKen, which the New York Times publishes. I like brain teasers. I like any kind of novelty word puzzle.

D: How does a British cryptic operate on a language level?

WS: In the British style, they have cryptic clues and this style of puzzle started almost when crosswords jumped the Atlantic in 1925. Crosswords were a craze here in 1924-25 and then they spread around the world. Our crosswords in those days were the definitions—the clues were strictly from the dictionary. A tree was always going to be clued as a “woody plant.” That was too ordinary and plain for the British mind, so they started introducing word play and twists. After a while, there was a whole body of rules that developed for British crosswords and in a nutshell, every cryptic clue contains two paths to the answer. It will contain a definition and it will contain some word play and the word play can involve an anagram, a homophone, dropping letters, word inside another word, and other kinds of word play. Over the years a whole body of cryptic rules for cryptic crosswords developed that most of the publications in Britain follow now. And you would think having two paths to the answer would make the clue easier than our style where we have just one path to the answer, but it’s not because you don’t know—when you read a cryptic clue—which part of the clue is the straight part and which part is the word play part. Also, in American crosswords, every letter in the grid has to appear in two answers across and down, that’s not true in Britain. You may have only about sixty percent of the letters cross. Generally speaking, you can never fill in an answer in a British crossword completely from the crossing words. In our puzzles, say you don’t know a certain word that’s five letters across, but if you get the five down answers, then you can solve the word without having ever heard of it. In British puzzles, that’s not true. There’s almost always at least one unchained letter. 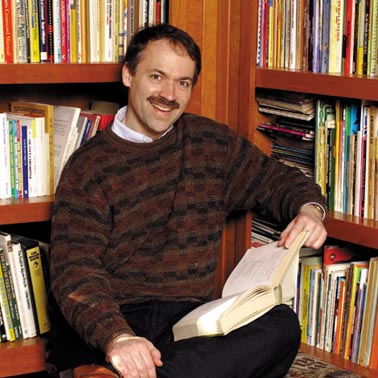 Will Shortz (Photo by Anthony Loew)

D: I didn’t know that originally the clues came from the dictionary definition.

WS: Pretty much, yeah, if you go back to the 20s and 30s, they were pretty much from the dictionary.

WS:
That’s right. The challenge came in a different way. It would be more of a test of your vocabulary. There was a lot more obscurity in those days. So if you were solving one of the quality crosswords at that time, there’s just a lot of words in there, you probably hadn’t heard of, or only very educated people would’ve heard of. That was what brought the challenge. It’s hard to imagine that those puzzles were that much fun in those days, and yet millions of people did them.

D:
It seems like crosswords have become more accessible because they’re more about solving something, more about stretching your brain than about drawing on your knowledge.

WS: Crosswords will always do both of those things. They will always test your brain as well as test your knowledge, but the emphasis has shifted. In the old days, it was more of what you knew. If you go back to the 30s or 40s and even in the 50s, you would almost never see a clue that intentionally misled you. In fact, that was almost true up to when I started at the Times in 1993. You would almost never see a clue that deliberately tried to mislead. Now of course that’s part of the game. I try to—especially on the Thursday, Friday, and Saturday puzzles—there will be many clues that intentionally mislead.

Do you ever have trouble with crosswords? Try our crossword solver here!

Here’s the second half of our interview with Will Shortz – where he tells us about his favorite crossword words.

Previous Where Did The Word "Vegan" Come From? Next A Brief History Of The Letter H
RELATED POSTS