Cheugy is a slang adjective mocking someone or something as “uncool”—they are out of touch with current trends or trying too hard to be trendy. Similar slang terms are basic or normie. The word cheugy is often used ironically.

Example: My mother is so cheugy: she participates in TikTok trends when they are already weeks old.

Where does cheugy come from? 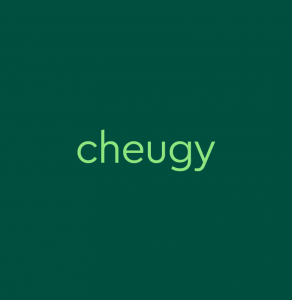 According to an April 29, 2021 article by Taylor Lorenz for the New York Times, the word cheugy was coined by Gaby Rasson of Los Angeles, California in 2013. Rasson said she invented cheugy when she was looking for a word that describes people who were unsuccessfully trying to be trendy. Rasson said, “There was a missing word that was on the edge of my tongue and nothing to describe it and cheugy came to me. How it sounded fit the meaning.”

Cheugy didn’t go viral until years later when it was used by TikTok user Hallie Cain. Cain introduced the word to their followers in a now-private video that was posted on March 30, 2021. In the video, Cain stated that cheugy was the perfect word to use to describe people who posted TikTok videos in hopes of being trendy or cool but actually came across as cringeworthy (or in slang, cringey).

Thanks to Cain’s video, cheugy started to spread on TikTok with the hashtag #cheugy getting over 10 million views by mid-May. The word cheugy slowly started to spread to other social media platforms. It started to appear on Twitter in early April and saw much wider use by the end of April.

Lorenz’s New York Times was picked up by mainstream media publications such as the TODAY show, who quickly followed suit in discussing the word trend. Popular articles also joked about cultural tastes and trends considered cheugy such as rose gold accessories, skinny jeans, and other items that have become stereotypically associated with millennials.

By early May, at least one media observer had already written an article arguing that the word cheugy had itself become cheugy due to the widespread media attention. By mid-May, others on social media were also making similar arguments.

The word “cheugy” is cheugy. The snake eats its own tail.

(The internet, compounded by media attention, can help accelerate the spread of a slang term into the mainstream, which contributes to making the term feel quickly dated—and therefore less slangy. Remember on fleek?)

did a raise the roof hand motion the other day so am i cheugy
@carbsley, May 7, 2021
It’s no coincidence that cheugy gained traction on TikTok, a platform that has functioned as an escape from Instagram’s once dominant aesthetic, which is the pinnacle of cheugy.
Taylor Lorenz, The New York Times, April 29, 2021

While cheugy had originally been used as trendy slang on TikTok, mainstream media attention made the term more familiar to many social media users. The word is used to accuse someone of being out of touch or a poser.

Making Tik Toks about things you find cheugy is cheugy

Occasionally, the words cheugyness or cheuginess are used as noun variations of the adjective cheugy. A person who is cheugy is sometimes referred to as a cheug.

This is not meant to be a formal definition of cheugy like most terms we define on Dictionary.com, but is rather an informal word summary that hopefully touches upon the key aspects of the meaning and usage of cheugy that will help our users expand their word mastery.