What does cool beans mean?

you rock, Roger that, 👍 Thumbs Up emoji, radass, realest, dope

Where does cool beans come from? 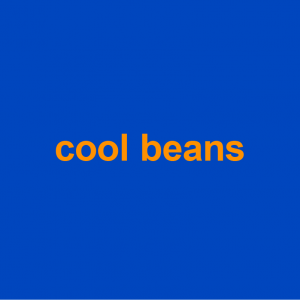 Best we know so far, cool beans is first recorded among college students sometime in the late 1960s and early 1970s. Cool, here, means “good,” a slang term dating to the late 1800s. But beans? No one knows for sure.

Slang lexicographer Jonathon Green has pointed to other legume slang phrases (also dating back to the 1800s) such as some beans (“impressive”) and full of beans (“excited”). Another theory links cool beans to drug culture, with drugs such as acid likened to beans—a connection underscored by use of the phrase by cannabis comedians Cheech and Chong.

Whatever the origin, cool beans was popularized by the 1980–90s sitcom Full House, where it was used as a catchphrase by the character DJ Tanner (Candace Cameron). Any drug associations were lost at this point, as cool beans had an old-fashioned, wholesome quality by then.

So much homework to do this is not cool beans
@AshleeySimoes, October 26, 2014
Apparently I have a new niece.. my brother's daughter was adopted 16 yrs ago.. adoptive mother made contact. cool beans..
@strebel, February 1, 2010
Cool beans, man. I live by the quarry. We should hang out by the quarry and throw things down there!
Creed Bratton, The Office (TV), 2008
SEE MORE EXAMPLES

Because it sounds like dated 1960–70s slang, cool beans may be used ironically, sometimes targeted at someone seen as uncool or older.

To wit, the 2007 comedy film Hot Rod even dedicates an entire scene to mocking the beans.

Despite this, cool beans still retains some heat, used as an idiosyncratic expression for “excellent” by a range of demographics.

My biggest turn off is when guys try to make me jealous of other girls. Nah fuck you she’s cool beans and we are friends now.

This is not meant to be a formal definition of cool beans like most terms we define on Dictionary.com, but is rather an informal word summary that hopefully touches upon the key aspects of the meaning and usage of cool beans that will help our users expand their word mastery.