What does headdesk mean?

When a simple facepalm won’t do, try a headdesk. Referring to the act of lowering your forehead to your desk, headdesk is an expression of extreme frustration, aggravation, or resignation.

jfc, oh my god, This is fine, Y U NO, Jesus take the wheel

Where does headdesk come from? 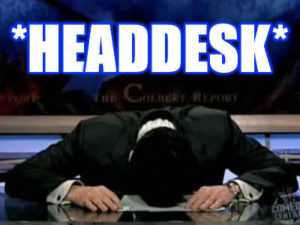 Headdesk—and, early on, head-desk—started to appear around 2002 on Usenet groups. Headdesk implies the user is so annoyed or angry they are repeatedly slamming their head onto their desk or computer.

It is often enclosed in asterisks, as *headdesk*, to suggest a non-verbal description or kind of internet stage direction.

Headdesk gained its first Urban Dictionary entry in 2003 and a second in 2005, which specifically mentioned it was used as *headdesk* in chat rooms and forums.

By the late 2000s and early 2010s, headdesk was being used a noun, verb, and sometimes adjective, and came to be used similarly to the more familiar facepalm.

Actual question: "So, are the books arranged in any particular order?" Nah, we just put on the shelves any old way. *headdesk*

With the rise of social media (and social media-fueled stupidity), headdesk spread as a popular way to express intense aggravation, still often enclosed in asterisks as *headdesk* for dramatic flair.

Oh, GOD, none of my posts are showing up on Tumblr. *headdesk*

Remember when AMERICAN HUSTLE wasn't even nominated for an Oscar for Best Makeup and Hairstyling? *headdesk*
@tawilliams11, 2015
Trump: “Many of the countries that treat us the worst on trade and on military are our ‘allies’ as they like to call them.” #headdesk #headdesk #headdesk
@dandrezner, March 2018

If you are faced with something so incredibly frustrating that a facepalm isn’t enough, it’s time for a headdesk.

When your coffee just isn’t strong enough to get your blood going in the mornin, you can argue with strangers online about the merits of your favorite webcomic #WhatHaveIDone#HeadDesk pic.twitter.com/T59v4hhCMs

A former FBI assistant director said "It could be someone who is trying to get the Democratic vote out and incur sympathy." #headdesk https://t.co/CdkacAyDMa

… other times, headdesk registers our own stupidity.

Protip: If you want your yeasted dough to rise, you should actually include the yeast… #headdesk

While headdesk is used as a noun and verb, it’s most commonly seen, as our examples show, in asterisks or as a hashtag at the end of a statement, functioning like an interjectional or parenthetical remark.

This is not meant to be a formal definition of headdesk like most terms we define on Dictionary.com, but is rather an informal word summary that hopefully touches upon the key aspects of the meaning and usage of headdesk that will help our users expand their word mastery.