What is pretty sus?

Pretty sus is short for pretty suspicious, colloquially used to accuse someone of some very shady or sketchy behavior.

The specific phrase pretty sus spread as a meme in 2020 thanks to the popularity of the video game Among Us.

Example: I gotta say, that guy over there is being pretty sus.

Slang is always older than you think. Want to take a guess at how old the slang term sus is?

Where does pretty sus come from? 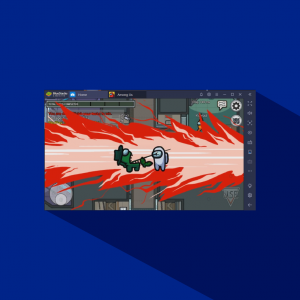 Sus, as specifically for short for suspicious, spread online in the 2000s. (Sus as short for suspect is much older, as you can learn in our About This Word section for sus).

The phrase pretty sus went viral video game Among Us. Originally released in 2018, Among Us surged in popularity in September 2020 when gamers livestreamed the game while staying at home during the COVID-19 pandemic.

In this online multiplayer game, players get assigned as alien impostors among a space crew. The impostors’ goal is to kill the rest of the crew without being caught and then voted to be executed. Through deception, the impostors try to cast suspicion (sus) on others to avoid being killed themselves.

So, why did pretty sus go viral because of this game? Ridiculously murderous imposters fooling delightfully bean-shaped crew members all by simply accusing someone else of being pretty sus—with neither logic or evidence.

Played a game of Among Us where the Impostor killed someone with 3 witnesses and still won. Everyone else was like, "idk pretty sus"
@RhydonH, September 27, 2020
As the Among Us player base would say, that sounds "pretty sus." However, there is a perfectly rational explanation why Among Us 2 was canceled.
Aaron Greenbaum, Looper, September 24, 2020

Pretty sus is commonly used in memes and other content featuring Among Us.

After just 1 night of playing among us, I get all the memes and I love them.

This is not meant to be a formal definition of pretty sus like most terms we define on Dictionary.com, but is rather an informal word summary that hopefully touches upon the key aspects of the meaning and usage of pretty sus that will help our users expand their word mastery.