What does gank mean?

We aren’t trying to gank you—which is to say, steal from you, con you, or to take you out in a video game. We wouldn’t gang up with our friends to gank you, either.

Where does gank come from? 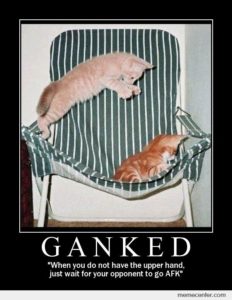 The origins of gank are unclear. It is possible it comes from a variant pronunciation of gang(ster). This explanation is compelling, as one of the earliest instances of the word comes from the 1987 track “Dopeman” by legendary hip-hop group N.W.A.

On “Dopeman,” rapper Dr. Dre can be heard in an interlude: “Man, I can’t believe this shit—this bitch is trying to gank me,” as in “This guy is really trying to sell me fake drugs.” Eazy-E follows up: “Gankers got the fake but you can get the real from the dopeman.”

By 1990, gank no longer just meant “to con” in the sense of selling fake drugs. It took on the meaning of “to steal (something),” notably found in hip-hop artist King Tee’s 1990 song “Ruff Rhyme (Back Again).” In it, he raps: “Sucker trying to gank my spot, least I think so.”

In the late 1990s, gank entered gaming lingo. Groups of players in massively multiplayer online role-playing games (MMORPGs) joined up to gank n00bs (newbies) or other weaker players. This involved collectively attacking them all or running them out of the game. This ganking suggest ganging up to kill someone, which may explain gank and harkens back to its possible gang(ster) roots.

I'll find the person who ganked my photo and used it on a dating app as their profile
@bushukudzai, November 2018
The Guardians predicted ganks and successfully evaded them while also taking a few kills on their way to give the early game lead to them.
Tyler Jewers, Sportsbyte Sunderland, November 2018
i walked out of the vault and i had the immediate feeling that someone was watching me, that a ganker was waiting around the corner to stab me in the back as i walked past to reclaim appalachia so i closed the game and haven't re-opened it yet lmao
@theholyvirtues, November 2018
SEE MORE EXAMPLES

Gank is closely associated with the gaming community. In MMORPGs like World of Warcraft, players can band together (form gank squads) to beat up on another player, such as a rival.

Ganking doesn’t always require a group, though. Any player who has been taken out can be referred to as getting ganked. A ganker is one who does the ganking and the act of ganking is a gank. 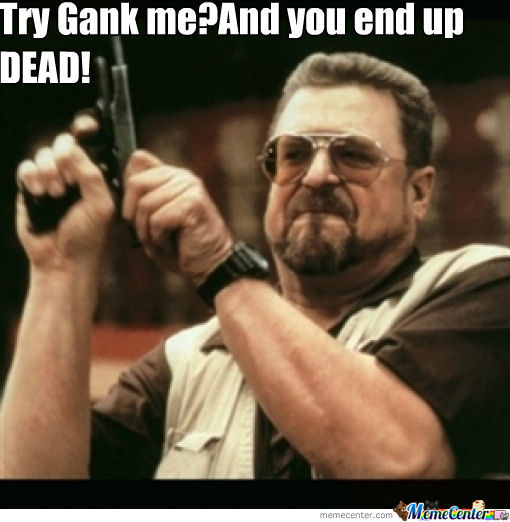 Ganking in the sense of “steal” remains in use, spreading into the mainstream from black and hip-hop slang. One example comes from the parody true-crime podcast Done Disappeared, whose Season 2 (2018) featured the search for the “Goose Ganker,” a thief who was stealing geese from the small, fictional town of Davistown.

Goose Ganker: n, an individual who habitually ganks or has been known to gank myriad geese, especially in the 1980s. Ex: “My baby been ganked by the ganker, the Davistown Goose Ganker.” https://t.co/QuZtjMq0Ve

This is not meant to be a formal definition of gank like most terms we define on Dictionary.com, but is rather an informal word summary that hopefully touches upon the key aspects of the meaning and usage of gank that will help our users expand their word mastery.