What does side hustle mean?

A side hustle is a means of making money alongside one’s main form of employment or income.

Where does side hustle come from? 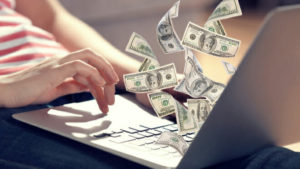 Hustle has been an English word since the late 1600s. From Dutch, hustle originally meant “to shake,” but evolved over the years, including “push roughly,” “move quickly,” and “give one’s full effort,” as seen in the sport of basketball.

By at least the 1920s, hustle came to mean “to defraud or swindle,” like a con job. In the 1940s in black slang, hustle signified a “paid job” (and legitimate one, at that) more generally. We have evidence for side hustle, or a source of money one has on the side of their main job, by the 1950s.

Uber, in fact, became so associated with side hustle, that in 2016, the company adopted the slogan Get Your Side Hustle On.

While it can be a part-time job, side hustles aren’t usually conceptualized as such, as they are ways of earning money on one’s own terms. In the 2010s, side hustles have become increasingly understood as activities, projects, or endeavors one undertakes as part of their broader personal or professional identity or “brand,” regardless of the amount of money it brings in.

Examples of side hustle

So my side hustle is teaching Chinese children English online via camera and headset and I swear me and this kid just bonded over KFC so hard.
@B_mutt_er, July 2018
Making it as an entrepreneur is no piece of cake. Whether you’re working a day job you’d love to quit or struggling to get by in the early stages of a startup, staying financially afloat can be a challenge. One solution: find a side hustle.
Kate Taylor, Entrepreneur, December 2013 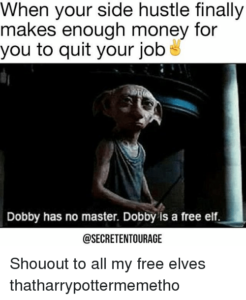 Who uses side hustle?

The phrase side hustle is closely associated with millennials and the internet economy.

Ethan and I wanted a new hobby/ side hustle so we started picking up free stuff from sites like offer up and fb marketplace and reselling it on the same sites, and we’ve made 1K already. I LOVE THE INTERNET.

Side hustles are typically creative, although not all ideas are equal.

welcome to rock bottom, population: me maya and heather spending 4 hrs on the internet trying to find someone to buy our feet pics as a side hustle

i’m tired of my generation complaining about the $3 in their bank accounts.

it’s 2018… if you don’t have an internet side hustle then you’re doing it wrong. and if you can’t do that? then keep trying & also get a real job.

you’re good at something. go get paid for it.

…or have them be exploited by The Man under the illusion of being in control of one’s on labor?

Are you a fresh graduate who is job hunting?
Do you need a side hustle to earn extra income or affected by ASUU strike?
Get paid for delivering gas to our numerous customers in your areas and neighbourhood in Abuja @gazhubllc #gas #abuja ##ASUU #Employment pic.twitter.com/GADpyHnmKZ

This is not meant to be a formal definition of side hustle like most terms we define on Dictionary.com, but is rather an informal word summary that hopefully touches upon the key aspects of the meaning and usage of side hustle that will help our users expand their word mastery.