What does adulting mean?

Adulting is an informal term to describe behavior that is seen as responsible and grown-up. This behavior often involves meeting the mundane demands of independent and professional living, such as paying bills and running errands.

Where does adulting come from? 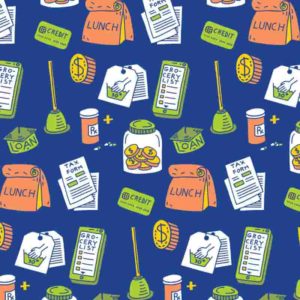 Adulting is based on a verbal extension of the word adult (i.e., “to adult” or “behave in the manner of an adult”). While there are older, unrelated instances of the form adulting, contemporary use began on social media in 2008–2009. The American Dialect Society nominated adult as a “Most Creative” word of 2015, and the term saw a major surge in 2016; its Twitter use increased by 700%.

The concept behind adulting may stem from the fact that members of the rising millennial generation are going through major life stages (such as getting married, having children, buying a home, etc.) at much later ages than previous generations. This has caused the term to become somewhat ridiculed in popular media. It doesn’t help that there are even classes that teach elementary adult skills ranging from personal finance to how to properly fold laundry—skills once traditionally taught in home economics. 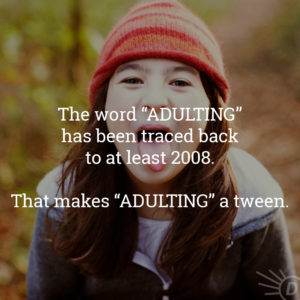 $1,000 is like $10 when you start adulating
@IamTayBae, January 2018
Adulting: realizing that paying off loans is also a way of treating yourself
@etelamaccin, January 2018
There has never been a time when I’d trade the stresses of adulting for the restrictions and powerlessness of childhood.
John Beckett, Patheos, January  2016
SEE MORE EXAMPLES

Adulting is often used by millennial-aged people to self-consciously and humorously acknowledge the performance of boring tasks associated with being an adult, frequently in the form of the hashtag “#adulting.” Others may ironically use the term to mock millennials’s delayed mastery of such responsibilities.

Some cultural critics have argued that the entire concept of adulting is a broader condemnation of society as seen by the rising generation of young adults who equate “being an adult” with participation in meaningless, capitalistic labor.

This is not meant to be a formal definition of adulting like most terms we define on Dictionary.com, but is rather an informal word summary that hopefully touches upon the key aspects of the meaning and usage of adulting that will help our users expand their word mastery.