Snitch-tagging is the act of tagging the subject of a negative post about them, especially on Twitter, that they weren't already tagged in (e.g., a subtweet).

It ensures the subject is aware of the criticism.

Where does snitch-tagging come from?

Snitch-tagging combines snitch, a negative word for an “informer” or “tattletale,” with tagging, or “identifying someone on social media,” usually by use of the @ symbol followed by the username.

Here’s a scenario to explain snitch-tagging. Let’s say you are talking trash, throwing shade, or otherwise subtweeting someone on Twitter. You want to complain about that person but don’t want them to know, so you don’t tag them, or mention them directly so they are alerted to it. Snitch-tagging happens when another person then responds to your post tagging that person. This effectively snitches on you and airs your shady comment, as if to say, “Hey, this dude is talking about you behind your back!” Ouch.

To be clear, I don't care about people CCing their friends or whatever. It's tagging a politician I've mentioned or the creator of something I'm critiquing that's the issue.

On Twitter, calling out users who tag others to snitch on them is evidenced as early as 2010 (e.g., Why is this snitch tagging me?).

The practice was called snitch-tagging as early as October 2014 by user @DubPeeWorld.

Ah, the snitch-tagging tweeter. One of Twitter's unsung heroes. https://t.co/fABRCMBlZI

After being entered on Urban Dictionary in 2017, snitch-tagging was further popularized by legal analyst Imani Gandy, @AngryBlackLady, who decried the practice after a user snitch-tagged her subtweet of Donald Trump.

People, before you go snitch tagging please remember that some of this moron’s followers are dangerous extremists & there’s a reason I didn’t @ him
@JessicaValenti, February, 2019
The case against snitch tagging is simple. If we wanted to alert someone that we were being shady about, we would tag them. That's what tagging is for. Twitter has built a whole robust system of it, with @ mentions and hashtags and photo tags. If we didn't tag them, you can bet your sabotaging ass we want to shit talk that person with our friends but we don't want to start DRAMA™ by looping them in the convo.
MJ Franklin, Mashable October, 2018 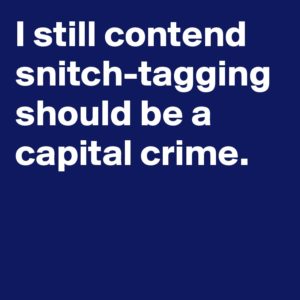 No one likes a snitch, as they say—and no one likes a snitch-tagger either. Snitch-tagging is considered cowardly, disrespectful, and aggressive, especially because it can invite dog-piling. It is typically called out or criticized as such on Twitter.

Hi Marie! This is called “snitch tagging.” When someone intentionally does not tag someone in a tweet, it is purposeful, so tagging that person so they are alerted to that tweet is bad form! Even when the tweet is complimentary, it’s still not advised. Thanks, tho! 💛

Popular artists and authors, as well as politicians and other celebrities, are often the subject of snitch-tagging. Such high-profile users like to issue PSAs bemoaning the practice and the harm it can do to their mental health.

Hello, general note of polite Twitter decorum – if you don’t like a TV show/film/book/album etc, PLEASE DON’T @ the creator and tell them. It’s incredibly aggressive, hurtful, selfish and destructive. If we want to know what people think, we will search for it ourselves. Thanks!

This is not meant to be a formal definition of snitch-tagging like most terms we define on Dictionary.com, but is rather an informal word summary that hopefully touches upon the key aspects of the meaning and usage of snitch-tagging that will help our users expand their word mastery.