What does stamp mean?

In slang, stamp can refer to LSD (acid) or a bag of heroin.

It can also be short for food stamps or the expression stamp of approval.

Where does stamp come from? 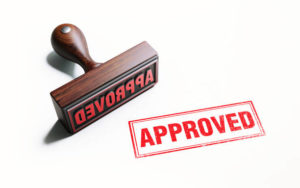 The drug slang stamps is recorded in the early 2000s. It can refer to drugs like LSD, also known as acid, when distributed as small, perforated tabs of paper soaked in the drug, said to resemble postage stamps (and said to have been distributed in prisons onto actual postage stamps since at least 1970s).

Photo of LSD stamp seized by police. Over 100 stamps from Kullu to be used in Delhi rave parties seized @htTweets pic.twitter.com/mTVDFQjuOu

It can also refer to small baggies of drugs, such as heroin, stamped with the logo or brand of a dealer.

Stamps can also be short for food stamps, a social welfare program (and term) started in 1939 to provide food to families living in poverty in the United States. Now formally known as Supplemental Nutrition Assistance Program (SNAP) benefits, they originally took the form of coupons (hence stamps) redeemable for food at designated stores.

made grocery , i still want more stuff i need some stamps 😫

If someone stamps you, it could be a sign of their approval. This expression comes from a stamp of approval, after an official marking made by a rubber stamp.

This was shortened by at least 2005 to stamp, as notably used by Eminem in his 2018 song “Venom,” where he says Dr. Dre gave him “his stamp like a postcard,” i.e., Dre was OK with Slim Shady.

I still don't know what you can and can't get with stamps 🤔
@Jodi_Jo19, April 2016
It's basically a photo archive of all the various heroin stamps floating around the Brooklyn and Manhattan areas, with reviews of the product itself so that other users have a real-time directory of what's going to make them nod off into a state of blissful, introspective somnolence, and what's going to leave them puking water and bile for hours.
Jamie Clifton, Vice, March 2012 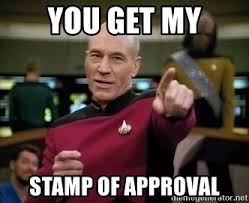 The meaning of stamp depends on context.

If someone is expressing that something meets with their approval, they might say Stamp!

Hillary got the official stamp from Beyonce, she should win now.

But, when Fetty Wap raps that “Remy Boyz got the stamp” on “Trap Queen” (2014–15), he’s talking about dealing heroin—though he may be also punning off stamp’s sense as “approval.”

If someone is licking stamps, it can mean they are getting high on acid—or sending a postcard.

In other contexts, stamps refers to the government assistance of food stamps.

This is not meant to be a formal definition of stamp like most terms we define on Dictionary.com, but is rather an informal word summary that hopefully touches upon the key aspects of the meaning and usage of stamp that will help our users expand their word mastery.