A syndemic is a situation in which two or more interrelated biological factors work together to make a disease or health crisis worse.

The term syndemic is used among medical and anthropological experts. The biological factors that contribute to a syndemic can be communicable (can be spread to others) or noncommunicable (can’t be spread to others) in nature. Syndemic is increasingly used in the context of sociological and economic factors that contribute to syndemics.

In 2020, the term syndemic saw mainstream attention after the scientific journal The Lancet repeatedly used the term in reference to the COVID-19 virus.

Where does syndemic come from? 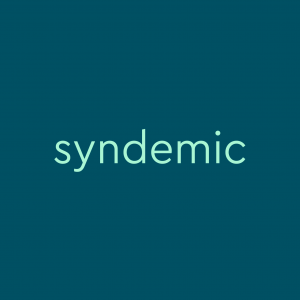 The term syndemic was created by medical anthropologist Merrill Singer in the early 1990s. As early as 1994, Singer put forth the term when examining how the AIDS virus disproportionately impacted poor people living in urban areas. He argued that the AIDS health crisis was more than an epidemic and that many interrelated factors were working together to worsen the intensity and damage of the AIDS crisis.

Specifically, Singer cited higher rates of infant mortality, malnutrition, diabetes, tuberculosis, and STDs among the urban population. Singer argued that these factors were interconnected and combined together to make the AIDS crisis much worse than it otherwise would have been. In response, he suggested the term syndemic to describe this situation.
The word syndemic is a blend of syn-, meaning “together,” and –demic, as in epidemic or pandemic. Infodemic is similarly formed.

Obviously, HIV weakens the immune system and so makes a person more vulnerable to any disease-causing pathogens. While the effect of tuberculosis on HIV is less clear, there is evidence that tuberculosis infections cause the HIV virus to replicate faster. As you can see, these two diseases are interrelated in that the presence of one is indirectly helping the success of the other.

Over the next several decades, the term syndemic would be used by Singer and other scholars to analyze interrelated factors that contributed to other medical emergencies. Often, a scholar examines a syndemic with an interest in the social or economic factors that contribute to a population’s increased incidence of disease(s). That is, while syndemic specifically refers to health effects, Singer and other sociologists/anthropologists would often be more interested in the causes of the syndemics, which were usually due to factors such as poverty and racism. For example, as a medical anthropologist, Singer argued that the urban poor’s increased rates of poverty, unemployment, homelessness, and substandard nutrition contributed to the increased rate of epidemic and endemic factors that made AIDS a syndemic.

In 2020, the scientific journal The Lancet repeatedly used the term syndemic in scientific articles focused on the COVID-19 virus. The term had repeatedly been used in The Lancet for years, sometimes incorrectly, according to Singer. In particular, an article in The Lancet used the term syndemic to describe the higher rate of COVID-19 outbreaks in the United States due to “political failures” and other nonmedical factors.

The Lancet’s use of syndemic would catch the attention of mainstream publications such as Forbes and The Financial Times, which analyzed the effects of economics on the spread of COVID-19.

Have a hunch that 'syndemic' will be one of the words of the year 2020. #progress
@KristofDecoste1, October 13, 2020
“COVID-19 is an acute-on-chronic health emergency,” said Richard Horton, the Lancet’s editor-in-chief. He described the coronavirus pandemic combined with high global rates of obesity, diabetes and other chronic diseases as a “syndemic.”
Kate Kelland, Reuters, October 15, 2020

Syndemic is used by such professionals as scientists, public health experts, and journalists.

Coronavirus + (coming) influenza virus in the context of health and social inequality, air pollution, and a criminal administration, makings for a sinister syndemic.

The world is caught in “syndemic” as high global rates of obesity, diabetes and other chronic diseases has enflamed the COVID-19 death toll https://t.co/TNwg2qEkOw pic.twitter.com/87SZnnhYCy

This is not meant to be a formal definition of syndemic like most terms we define on Dictionary.com, but is rather an informal word summary that hopefully touches upon the key aspects of the meaning and usage of syndemic that will help our users expand their word mastery.