by Kimberly C. Ellis, PhDI remember that Sunday so clearly. I saw something called “#RedWedding” trending on Twitter and when I clicked on the hashtag, I discovered it was related to the hit television show Game of Thrones already into its third season.

I decided that night I would find out about the show, watch it for the first time, and learn about this Red Wedding. My goodness, why did I do that? I was in the throes of caring for my mother who was suffering from dementia, and now I had to grapple with valar morghulis, “all men must die”?

Now, as I watch Game of Thrones come to an equally red end after eight seasons, it’s a different hashtag that has brought me—and so many of those online—so much culture, so much creativity, so much life: “#DemThrones.” Or, what its creators have called  “the greatest TV show hashtag of all time.”

The term and hashtag “#DemThrones” is rooted in the African American Vernacular English dem, meaning “them,” and the popular HBO television show, Game of Thrones (i.e., Them Thrones).

Based on George R.R. Martin’s fantasy series A Song of Ice and Fire, Game of Thrones is one of the most popular television shows in history. The show is also a hit on Twitter, with fans live-tweeting the telecast under the official hashtags, “#GameofThrones” and the abbreviated “#GoT.”

“#DemThrones,” however, is an unofficial, unlicensed, and organically created social television hashtag, largely used by another cultural phenomenon: Black Twitter.

There is no “#DemThrones,” and its internet culture, without Black Twitter.

First, Black Twitter users began creating their own cultural behaviors, norms, and language usage on Twitter since the platform’s inception in 2006, and was well established by the time HBO’s Game of Thrones premiered in 2011.

Second, while generating hashtags is central to Twitter, Black Twitter users have always created distinct hashtags reflective of their heritage and norms. “#DemThrones” is an immediately recognizable cultural product of the Black vernacular tradition—and not just the African American one, as the use of dem for “them” is an extremely common linguistic form for English speakers from Africa and throughout the African diaspora.

Third, the creators of the hashtag are a group of three African American men known as FiyaStarter (@hotfiyastarter). They first used the phrase Dem Thrones on their website and then, subsequently, their podcast of the same name.

As FiyaStarter member Sam explained in an interview, “#DemThrones” “was first mentioned on our podcast in Spring 2012, during a recap of an episode of [Season 2] … I’m sure we used the term before that, as that’s just how we speak to each other.”

#iHATEtheon @rodimusprime Damn Theon gotta kill this old man to show everyone has "The Juice"? Time to pay the iron price dog. #DemThrones

So, FiyaStarter’s audience would have first heard them use the vernacular in speech form. It only became the hashtag “#DemThrones” as they began to live-tweet the show and promote their podcast on it—and not until the second season, at that.

Ironically, the creators did not intend for the hashtag to go viral and did not create it with Black Twitter as the end user in mind. Rather, their usage was organic and idiosyncratic. “It was a little off-putting at first, having Black Twitter take our slang and run with it,” Sam explained, “because we had never had any real interaction with the vast majority of people using it.”

The rise of “#DemThrones”

The rise of “#DemThrones” owes much of its vitality to the podcaster, Rod Morrow (@rodimusprime), who hosts the successful podcast The Black Guy Who Tips with his wife Karen Morrow (@SayDatAgain, whose dat, “that,” also showcases African American Vernacular English).

Already a popular tweeter and well-known participant of Black Twitter, Morrow live-tweeted airings of Game of Thrones solely using the hashtag “#DemThrones.” He also recapped the show on his podcast, using “#DemThrones.”

“#DemThrones” took on a life of its own, and Rod’s usage of the hashtag became so widespread, he was often mis-credited as its creator.

This is how black @GameOfThrones fans have built their own universe out of Westeros with #DemThrones pic.twitter.com/TbyuUeXtVm

Beyond Game of Thrones

“#DemThrones” is not just a high five to African American culture. It is a broader signifier of Black Twitter—of a safe, fun, spectacular, and wide-open space, of a democratized speech whose incisive discourse and dialogues, whose monologues and laugh-out-loud memes, are distinctly rooted in Black culture. That’s what makes it so great.

Let's give it up for the tall women, of which I am one! Here's to Jamie and Brienne making love—finally! #DemThrones #GameofThrones pic.twitter.com/ewLGAeDRCz

“#DemThrones” is a much-needed microphone to express oneself in real time and sounding board for post-show discussions. Participating in or following along with the swift commentary of “#DemThrones” is next-level fun in a digital beauty shop, barbershop, after-church meal, rent party, and juke joint all in one. Its social engagement and success are at once historic and a grande ole time.

Me, before I joined #DemThrones Twitter vs me after pic.twitter.com/Wb5we4mwF6

On April 14, 2019, during the season premiere of the final season of Game of Thrones, the Home Box Office used “#DemThrones” on its official @HBO twitter account for the first time in its eight-season run—all by itself and without any explanation. None was necessary.

That HBO made “#DemThrones” mainstream, though it had been popular on Black Twitter since 2012, reveals so much how language reaffirms marginalized communities and identities—and how they get appropriated in the mainstream. It reveals so much about who creates language, who gets credit, and who benefits.

Sam, from FiyaStarter, stated that their reaction to @HBO’s usage was “validating on one level, but we couldn’t ignore the fact that [HBO] didn’t want us using the phrase to make T-shirts.”

Asked of spin-off hashtags like “#ThronesYall” and “#DemDeadz” (for The Walking Dead), Sam underscored the importance of credit: Bottom line: once you create something and put it out there, it takes on a life of its own. It just wasn’t cool seeing people “create” hashtags that were so absolutely rooted in our slang. The idea that “Dem Thrones” was just a lucky one-off rather than the inevitable result of this slang we created for ourselves was the worst part of the whole ordeal of trying to get our due as creators. It’s not like we didn’t have have years of evidence, dating back to 2005, on our website to prove it. Rod never took anything related to “#DemThrones” too seriously: “I’m more about having fun with my fellow black people watching a show … At the same time I didn’t and don’t want anything from it. The thing I got was all these black people having a good time.”

By celebrating “#DemThrones” on Dictionary.com, we honor African American Vernacular English, Black Twitter, the creators and communities of the hashtag—each cast in its own distinct and significant cultural irons.Quotes were lightly edited for clarity. 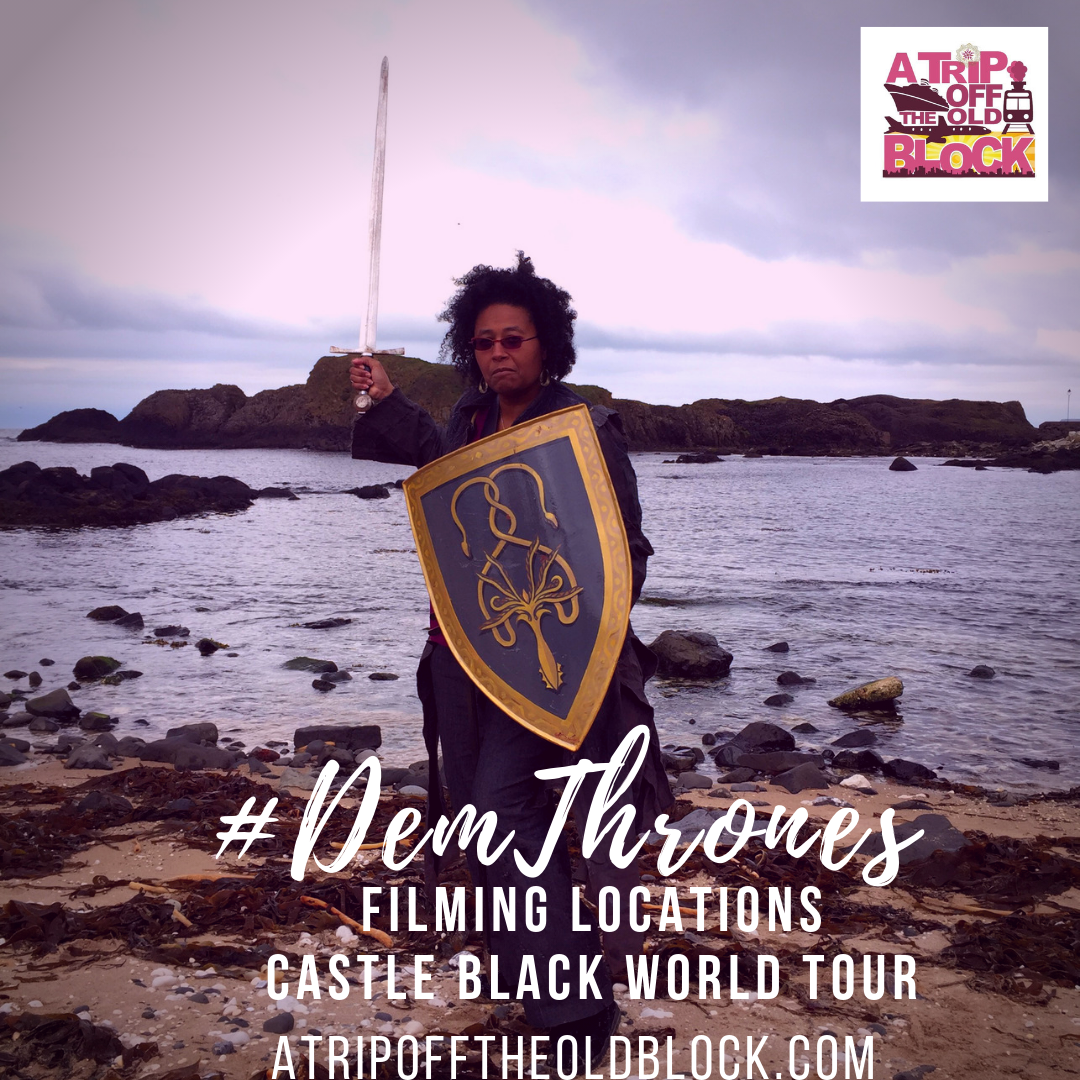 Kimberly C. Ellis, Ph.D. is popularly known as @DrGoddess and described as “the champion of Black Twitter.” She created the first and only international live-tweet on “Blackness in Game of Thrones” (and using the “#DemThrones” hashtag), and live-tweeted the show every week. She is the author of the upcoming book The Bombastic Brilliance of Black Twitter and created a documentary on her mother’s journey with dementia, You’re Beautiful to Me. She also leads the world-travel group “A Trip Off the Old Block,” which includes Game of Thrones filming locations.