What does La Vie Bohème mean?

We’ll tell you what La Vie Bohème without breaking out into song, we promise. La Vie Bohème is French for “The Bohemian Life” and is the title of a song in the popular musical, Rent.

Where does La Vie Bohème come from?

Bohemianism originated in 19th-century France and was inspired by the nomadic lives of the Roma, commonly but more disparagingly known as Gypsies, or bohèmes in French. 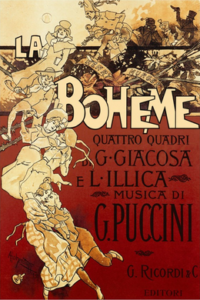 Nearly one hundred years later, a little known composer named Jonathan Larson was captivated by that opera. He wrote Rent, which debuted in 1994, as a modern retelling of Puccini’s opera. Inspired by Larson’s experiences in New York City, Rent is the story of a group of bohemian artists living in the East Village as they face hardships of the 1980–90s, such as poverty, drug addiction, and the AIDS crisis.

One of the best-known songs in Rent is a two-parter titled “La Vie Bohème” (by Anthony Rapp), French for “The Bohemian Life.” The song—and the entire musical, really—celebrates modern bohemianism, which champions creativity and individual freedom over a mainstream lifestyle, even if that means not knowing when your next meal will be or where you will next sleep.

My skills include knowing all the words to La Vie Boheme and that is it
@Panda_Riah, February 2019
But by the time the Act I finale of “La Vie Bohème” came around, the cast was so excited, they broke out into Marlies Yearby’s iconic choreography.
Dave Quinn, People, January 2019

La Vie Bohème is one of the most popular songs from Rent, an acclaimed musical that has been produced many times all over the world.

I’ve been listening to La Vie Bohème from Rent for an entire week now and I ain’t even mad about it pic.twitter.com/qbCvHETGSM

The musical was infused with a fresh jolt in 2019, when Fox staged a partially live TV production.

The adjective bohemian remains widely used to refer to a young, creative person who lives and acts free of society’s norms.

Gutted I can't be a bohemian in La Vie Boheme😞

Although the spirit of bohemianism still lives on in contemporary culture, most mentions of la vie bohème are likely to be about the musical Rent, not unconventional French artists.

La vie Bohéme is sturdily stuck in my head. I mean, I don't mind.

This is not meant to be a formal definition of La Vie Bohème like most terms we define on Dictionary.com, but is rather an informal word summary that hopefully touches upon the key aspects of the meaning and usage of La Vie Bohème that will help our users expand their word mastery.