a person who is torn by inner conflict.

What is the origin of agonist?

The English noun agonist comes from the rare Late Latin noun agōnista, “an athlete or combatant for a prize in the games,” a word used once by St. Augustine in a sermon. Latin agōnista betrays its Greek origin with its –ista agent suffix (borrowed from Greek -istḗs). In Greek, agōnistḗs means “a combatant, contestant (in athletic games), a champion, a pleader or public speaker,” which covers a lot of territory when you consider the roles that competitive athletic games and public speaking (including criminal and civil trials) occupied in ancient Greek life. Agōnistḗs is a derivative of the noun agōnía, one of whose many meanings is “mental or spiritual anguish, agony,” which influenced one of the English meanings of agonist but doesn’t occur in Greek agōnistḗs. Agonist entered English in the first half of the 17th century.

how is agonist used?

There was a fissure in him from the start; the dream and the business did not march together; his will was not always the servant of his intelligence; he was an agonist, a self- tormentor, who ran to meet suffering halfway.

He was an agonist. He would argue one way; he would argue another; he just didn’t want to see bigotry thrive or watch a man die.

SYNONYM OF THE DAY
Double your word knowledge with the Synonym of the Day!
SEE TODAY'S SYNONYM
Load More
Oct 30 gloaming
Nov 01 agonist
Word of the Day Calendar

What is the origin of eldritch?

If the word is weird, eerie, and uncanny, it’s likely to be Scots, and eldritch is all of them. Most etymologists see a connection between eldritch and elf, as the early spelling variant elphrish suggests. The second syllable is likely to be Middle English riche “kingdom, realm” (from Old English rīce); the d is an excrescent or intrusive consonant between the l and the r, like chimbley for chimney in Oliver Twist: “they damped the straw afore they lit it in the chimbley.” This “Elf Kingdom” used to be exclusively Scots; the first “non-Scots” author to use the word was Nathaniel Hawthorne in his Scarlet Letter (1850). Eldritch entered English in the early 16th century. 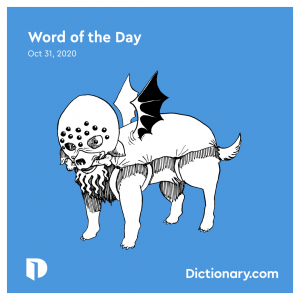 how is eldritch used?

In this anthology podcast, the mountains of central Appalachia are haunted by the sort of sanity-draining eldritch monsters found in a Stephen King novel, or in HBO’s “Lovecraft Country.”

Despite the eldritch horrors of Toni’s princess cake, her competitors’ renditions were, somehow, even more atrocious.

Helen Rosner, "The Joys of Netflix's "Nailed It!," the Baking Competition That Celebrates Kitchen Disaster," The New Yorker, June 1, 2018

What is the origin of gloaming?

Gloaming, “twilight, dusk,” ultimately comes from Old English glōmung, which occurs once as a translation of Latin crepusculum “dusk, twilight.” Glōmung is a derivative of glōm “twilight, darkness,” from the same root as the verb glōwan “to glow like a coal or fire” (gloaming being the glow of sunrise or sunset). It is tempting to include gloom and its variant glum in this group, but the philological evidence is against it. Gloaming entered English before 1000.

how is gloaming used?

During the workweek, when we are earning the money to pay for all those expensive gardening implements, it’s not possible to do much outside until dusk. Then, with the fireflies, we emerge into the gloaming armed with an arsenal of rakes, pitchforks and spades, like some medieval rabble on its way to battle.

Fortunately, at certain times and places Mercury is more removed from this all-obliterating influence than he is at others, and at such times he may be very distinctly seen, shortly after sunset, twinkling through the gloaming in the west.

Percival Lowell, "Mercury in the Light of Recent Discoveries," The Atlantic, April 1897