pertaining to or befitting a feast, festival, holiday, or gala occasion.

What is the origin of festal?

The adjective festal comes via Old French festal, festel from the Latin neuter singular noun festum “holiday,” a noun use of the adjective festus “relating to or befitting a feast or holiday.” (The French and English suffix –al derives from Latin –ālis.) Festa, the plural of festum, becomes a singular feminine noun in Vulgar Latin and the Romance languages, yielding feste in Old French (fête in French), festa in Provençal, Catalan, Portuguese, and Italian, and fiesta in Spanish (Castilian). Festus forms the Latin adjective festīvus “festal, jovial, festive.” Festal entered English in the second half of the 15th century.

how is festal used?

In honour of this glad day, we shall drink the best wine and sup on the finest festal dishes.

Into this festal season of the year—as it already was, and continued to be during the greater part of two centuries—the Puritans compressed whatever mirth and public joy they deemed allowable to human infirmity …

SYNONYM OF THE DAY
Double your word knowledge with the Synonym of the Day!
SEE TODAY'S SYNONYM
Load More
Dec 11 forby
Dec 13 festal
Word of the Day Calendar

What is the origin of Brobdingnagian?

The adjective Brobdingnagian, “enormous in size, immense, gigantic,” derives from the noun Brobdingnag, the land of the giants, the second of the exotic lands that Lemuel Gulliver visited as recorded in Jonathan Swift’s Gulliver’s Travels. Just as Lilliput and Lilliputian sound small and cute, so Brobdingnag and Brobdingnagian sound clumsy and heavy. Brobdingnagian entered English in the first half of the 18th century. 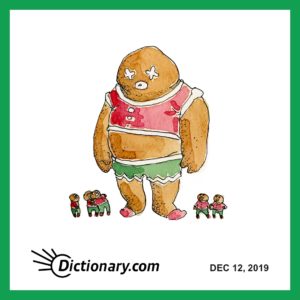 how is Brobdingnagian used?

… the entire space will be given over to a single Brobdingnagian sculpture—“Reverse Curve,” back-to-back plates that form an S-shape and wind, riverlike, for 99 feet.

Since the launch of the Kepler telescope, scientists have discovered that the boiling, Brobdingnagian planets are in fact rarities and are just simpler to spot than cold, rocky planets.