wholly or partly open to the sky, especially of a classical building; having no roof.

What is the origin of hypethral?

The uncommon adjective hypethral (also spelled hypaethral) means “open to the sky, not having a roof, uncovered.” The English word comes from the Latin adjective hypaethros; the neuter of the adjective, hypaethron, is used as a noun in Latin meaning “temple open to the sky.” Hypaethros is a borrowing from Greek hypaíthrios (also hýpaithros) “in the open air, in open country,” a compound of the familiar prefix hypo- “under” and the noun aithḗr “the upper air, pure air, ether.” In Greek hýpaithron did not mean “temple open to the sky”; that was a new sense coined by the Roman architect Vitruvius in the first century b.c. Hypaethral entered English in the late-18th century.

One of the noblest effects of interior illumination known in historical art is in the Roman Pantheon, the area of which (140 feet in diameter) is lighted only by the circular hypethral opening 25 feet wide at the apex of the dome.

SYNONYM OF THE DAY
Double your word knowledge with the Synonym of the Day!
SEE TODAY'S SYNONYM
Load More
Mar 07 cavil
Mar 09 hypethral
Word of the Day Calendar

Previous Next
Sunday, March 08, 2020
Today's Word of the Day was selected by Girl Scouts 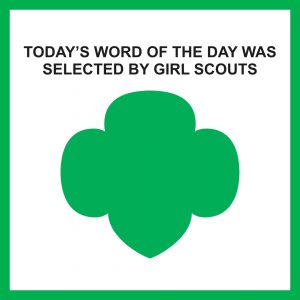