Previous Cue vs. Queue Next Let’s Cut to the Chase: Idioms Are a Piece of Cake

We’ve faced innumerable challenges this year, and the 2020 Word of the Year illustrates that. Find out what it is here!

At Dictionary.com we aim to pick a Word of the Year that embodies a major theme resonating deeply in the cultural consciousness over the prior 12 months. This 2016, some of the most prominent news stories have centered around fear of the “other.” Fear is an adaptive part of human evolutionary history and often influences behaviors and perceptions on a subconscious level. However, this particular year saw fear rise to the surface of cultural discourse. Because our users’ interest in this overarching theme emerges so starkly for one specific word in our trending lookup data, xenophobia is Dictionary.com’s 2016 Word of the Year.

The word xenophobia is actually relatively new, and only entered English in the late 1800s. It finds its roots in two Greek words, xénos meaning “stranger, guest,” and phóbos meaning “fear, panic.”

Dictionary.com defines xenophobia as “fear or hatred of foreigners, people from different cultures, or strangers.” It can also refer to fear or dislike of customs, dress, and cultures of people with backgrounds different from our own.

What spurred an interest in the term xenophobia?

Within the recent past, we can date user interest in the term xenophobia to April 2015, when there was a massive surge in lookups that was larger than any of the peaks seen in 2016. This spike in lookups was connected to attacks on foreign workers and overall rising xenophobia in South Africa. While lookups for xenophobia in the US also rose during that time, it was lookups from Dictionary.com’s worldwide users that made this particular surge so significant.

The largest spike in our data for the term xenophobia this year occurred on June 24 with a 938% increase in lookups—that’s hundreds of users looking up the term each hour. This was the day after the UK voted to leave the European Union as the result of a much debated referendum, also known as Brexit. Another lookup trend that was influenced by the Brexit vote: user interest in the term hate crime soared in the month of July as newspapers covered an increase in crimes motivated by prejudice in post-Brexit UK. In October, the British Home Office reported a 41% increase in hate crimes the month following the EU referendum.

Soon after Brexit, the second largest surge in lookups this year for the term xenophobia leads us to the 2016 US presidential race. On June 29, President Obama gave a speech in which he expressed concern over the use of the term populism to describe Donald Trump’s political rhetoric. Obama insisted that this was not an example of populism, but of “nativism or xenophobia.” The biggest spike in lookups for the term populism occurred on June 30 as a result of Obama’s speech. 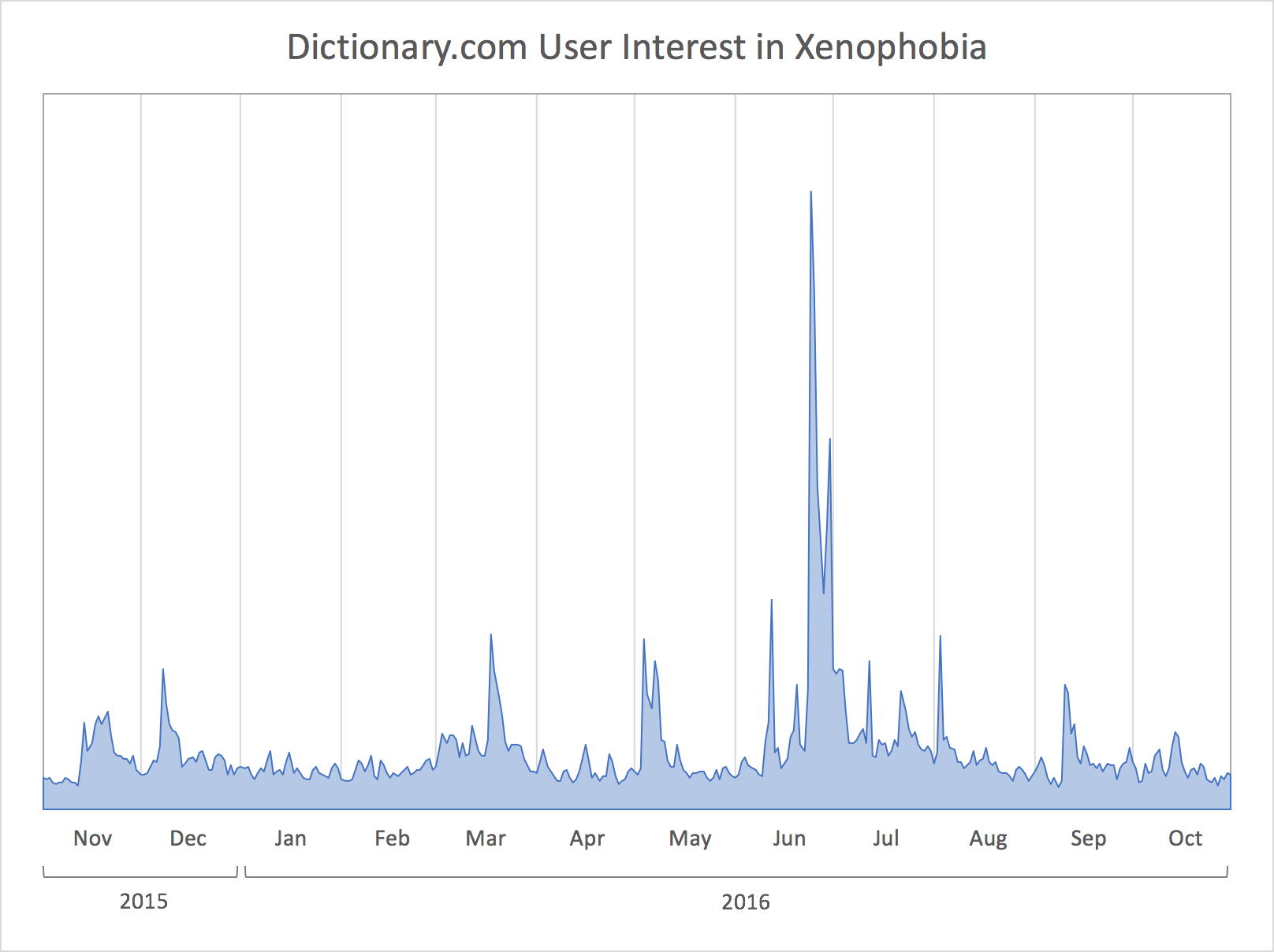 Xenophobia manifested itself in other world events in recent years. Immigration, in particular, has become a primary source of political contention. Syria’s refugee crisis has been front and center in the news worldwide, and according to Amnesty International, about half a million Syrians left their country this year to escape civil war. Because Syria is a majority Muslim country, many criticize anti-immigration policies as Islamophobic. Underlying fear of Islam also motivated legislation in France over the past year to ban burkinis, the full-coverage swimsuits favored by many Muslim women (the legislation was ultimately overturned). Unsurprisingly, users of Dictionary.com showed interest in the term burkini for the first time ever this past summer.

The pervasiveness of xenophobia in Dictionary.com’s lookup data caused us to reflect on other ways in which fear of the other has dominated popular discourse over the last 12 months. This year in the United States we saw the rise of the alt-right, white nationalism, and other ideologies that promote hate, especially directed toward Muslims, Latinos, Jews, trans and queer communities, black America, and other nondominant groups. On November 9, the day after the US presidential election, the term xenophobia spiked in lookups on Dictionary.com, and, according to the Southern Poverty Law Center, there has been an increase in hate-based incidents since election day.

Xenophobia and Fear of the Other

A related term that often comes up in the context of xenophobia is otherness: “the quality or state of being perceived or treated as different, foreign, strange, etc.” Otherness has existed in English since the 1500s, though its early uses were often in the context of a spiritual transcendence beyond the human experience. By the 1800s, otherness was regularly used in reference to cultural foreignness.Xenophobia and otherness are often discussed in the context of one another, but they’re distinct both in their origins and their historical use. While the etymology of xenophobia explicitly links it to the psychological response of fear, otherness can be thought of in terms of sociological identity, defining what is normative by naming what is not. Similarly, the terms xenophobia and racism often come up together. While they are distinct phenomena, racism is often the basis of xenophobia—boiling simply down to the sentiment, “I don’t like you because you don’t look like me.”

The concept of xenophobia has parallels in the technology sector. Uncanny valley, a term that will soon appear on Dictionary.com, explores human discomfort when confronted with otherness in technology. The term refers to the feelings of unease or revulsion that people tend to have toward robots or computer animations that closely imitate or resemble humans. This unconscious response implies that we have strong negative reactions to so-called unnatural qualities in things that look human. Similarly, we can understand xenophobia as one manifestation of fear triggered by perceived differences. If that’s the case, the more exposure we have to people who are different from us, the more at ease with that difference we will be. In an ideal world, understanding would lead to acceptance, and from there, empathy would follow.

While our lookup data can tell us what Dictionary.com users are interested in, it doesn’t tell us the reason for the interest. Perhaps some of our users were unfamiliar with the word xenophobia, while others might have looked it up to double check the spelling or pronunciation. Maybe our users looked it up to affirm what they already knew about the meaning, or to share the definition with others. What we do know is that from global events to political rhetoric, xenophobia was a recurring subject of discourse in 2016. Despite being chosen as the 2016 Word of the Year, xenophobia is not to be celebrated. Rather it’s a word to reflect upon deeply in light of the events of the recent past.

The 2016 Word of the Year is sure to spark discussion. Robert Reich, Professor of Public Policy at University of California, Berkeley and former US Secretary of Labor, shared his take on Dictionary.com’s choice in a video. Watch it on Vimeo.

Previous Cue vs. Queue Next Let’s Cut to the Chase: Idioms Are a Piece of Cake
RELATED POSTS