Save This Word!
This shows grade level based on the word's complexity.
noun Grammar.
a relative clause that modifies a noun or pronoun, as the clause that I told you about in This is the book that I told you about and who saw us in It was she who saw us.
QUIZ
SHALL WE PLAY A "SHALL" VS. "SHOULD" CHALLENGE?
Should you take this quiz on “shall” versus “should”? It should prove to be a quick challenge!
Question 1 of 6
Which form is used to state an obligation or duty someone has?
shall
should
TAKE THE QUIZ TO FIND OUT

What is an adjective?

An adjective is a word that modifies a noun or pronoun.

Adjectives describe nouns and pronouns or provide more information about them. Most of the time, adjectives modify words by describing a quality of them, as in I played with the happy dog.

Adjectives can also include words that give an amount or a number, as in He ran from many bees.

Some demonstrative pronouns (pronouns that point to specific things, such as this) and words that impose limits can also be used as adjectives, as in I want this cake.

Usually, adjectives come immediately before the noun they modify, but they can also follow a linking verb (copula verb), like be and seem, as in The flowers smell nice.

Get even more information about adjectives in our article.

Why are adjectives important?

The first records of the term adjective come from around 1350. It ultimately comes from the Late Latin verb adjectīvus, meaning “attributive.” Adjectives are attached to nouns and often describe attributes of them.

Many adjectives can be intensified, that is, made stronger, when we want to compare things, as in Julie is faster than I am.

Sometimes, nouns are used as adjectives. In this case, the noun acting as an adjective will always come immediately before the noun it is modifying, as in Milk chocolate is my favorite.

Not every adjective can be intensified. Some adjectives describe attributes that either are or are not, such as dead and entire. Something is either dead or it’s not, so it can be “more dead.” If you eat the entire cake, there isn’t any cake left, so you wouldn’t modify entire with anything.

What are real-life examples of adjectives?

This chart lists just some of many adjectives we use. 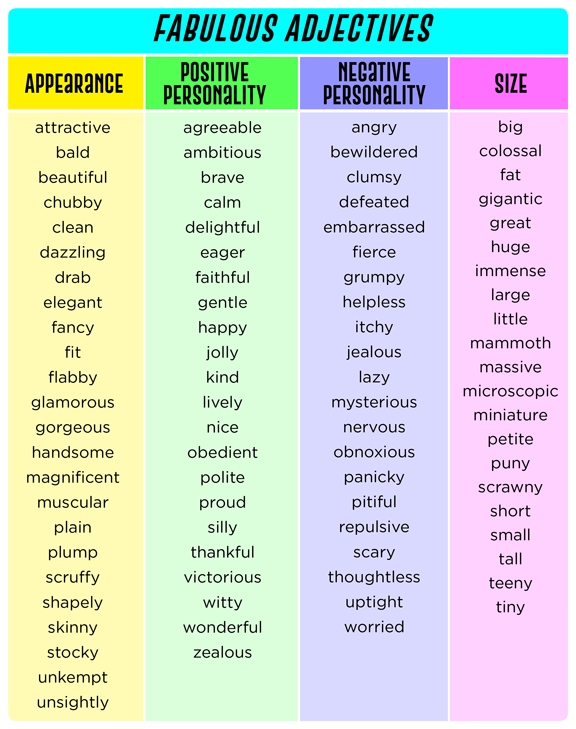 We use adjectives in many of our sentences.

What other words are related to adjective?

Which of the following words is an adjective?

What is an adjective clause?

An adjective clause is a relative clause that modifies a noun or a pronoun.

Adjectives are words that modify, or provide details about, nouns and pronouns. A clause is a collection of words that includes a subject (something performing an action) and a predicate, the action.

Cars, which run on gas or electricity, are expensive.

They grabbed the book that contained magic spells.

He lived in a house that he built by himself. (The relative pronoun is present.)

He lived in a house he built by himself. (The relative pronoun is omitted).

Why is adjective clause important?

Adjective clauses are always dependent clauses. They can never be used by themselves as a sentence.

What are real-life examples of adjective clause?

Here are some more examples of adjective clauses that range in complexity:

My mom, who is a doctor, performed the surgery.

I need a book that I can give to my sister.

She has a friend who likes dogs and another who doesn’t.

The chef only eats cakes when they are made in Italy.

We use adjective clauses to spice up our sentences all the time even if we don’t always know what they are.

From blank stares to revelations, English 3 attacked some grammar today! Can you identify an adjective clause? #grammarmatters #whywisd

What other words are related to adjective clause?

Does the following sentence contain an adjective clause?

She doesn’t bother her parents when they are busy.

How to use adjective clause in a sentence