Save This Word!
This shows grade level based on the word's complexity.
noun
a workout technique involving a series of exercises performed in rotation with minimal rest, often using different pieces of apparatus.
QUIZ
WILL YOU SAIL OR STUMBLE ON THESE GRAMMAR QUESTIONS?
Smoothly step over to these common grammar mistakes that trip many people up. Good luck!
Question 1 of 7
Fill in the blank: I can’t figure out _____ gave me this gift.
who
whom
TAKE THE QUIZ TO FIND OUT

What is circuit training?

A circuit is something that repeatedly returns to where it started. In circuit training, the entire collection of exercises is repeated a certain number of times.

Circuit training is a popular workout routine that can be easily customized to your exercise goals (cardio, strength, endurance, etc.). Circuit training can be done by people of all skill levels and can be a solo or group exercise.

Why is circuit training important?

The first records of the term circuit training come from around 1957. Circuit training itself was invented in 1953 by R. E. Morgan and G. T. Anderson at the University of Leeds in England. Their exercise program consisted of 9 to 12 carefully chosen exercises (of 8–20 repetitions completed in 15–45 second sets), with little to no rest in between exercises. Once completed, all of the exercises would be repeated in the same order a certain number of times, depending on desired intensity. These circuits of exercises are what gives the fitness program its name.

The blueprint of circuit training is intentionally vague so you can customize it to fit your workout goals. For example, a beginner circuit training designed to maximize weight loss might have 20-second sets of six fat-burning exercises (such as push-ups or crunches) with no rest in between, repeated three times. An expert, full-body strength routine could include five repetitions of 10 intense, muscle-building exercises (such as deadlifts and squat lifts) with 30 seconds of rest between sets, repeated five times.

Because it is so easy to adapt the general concept, circuit training is used in routines designed to lose weight, build cardio, sculpt muscle, and achieve any other number of fitness goals. However, every circuit training program will directly or indirectly include cardiovascular exercise because circuit training focuses on prolonged movement with little to no rest. Most circuit training programs also tend to include exercises that target different parts of the body because exercising the same muscles repeatedly with no rest is very likely to cause fatigue or injury.

Because they often have to get in shape very quickly, circuit training is popular with many Hollywood actors. For a recent example, several members of the cast of Marvel’s Avengers: Endgame (2019) used circuit training as part of their workouts to achieve superheroic levels of fitness.

What are real-life examples of circuit training?

This image gives an example of a basic circuit training routine: 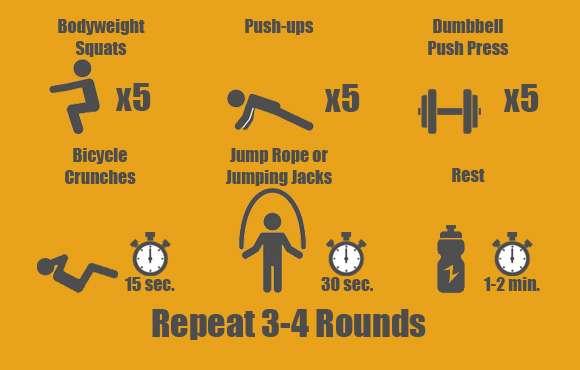 Circuit training is a popular workout program that many people include in their fitness regimens.

I am sore in every inch of my body from circuit training last night! Gosh its like training for the olympics!

That gym was a beast. Circuit training is the best.

What other words are related to circuit training?

Jogging on the beach is an example of circuit training.

How to use circuit training in a sentence