[ tes-uh-ley-shuhn ]
/ ˌtɛs əˈleɪ ʃən /
Save This Word!
See synonyms for tessellation on Thesaurus.com
This shows grade level based on the word's complexity.
noun
the art or practice of tessellating.
tessellated form or arrangement.
tessellated work.

What Are The Most Fun Words In The English Language?

MORE VIDEOS FROM DICTIONARY.COM
QUIZ
WILL YOU SAIL OR STUMBLE ON THESE GRAMMAR QUESTIONS?
Smoothly step over to these common grammar mistakes that trip many people up. Good luck!
Question 1 of 7
Fill in the blank: I can’t figure out _____ gave me this gift.
who
whom
TAKE THE QUIZ TO FIND OUT

What does tessellation mean?

A tessellation is a pattern of shapes that fit together perfectly, without any gaps.

Tessellation often refers to a pattern that includes a repetition of one particular shape, such as the repetition of squares in a checkerboard. But tessellations can be formed from multiple shapes. For example, a classic black-and-white soccer ball is an example of a tessellation that consists of two different shapes: hexagons and pentagons.

A tessellation is a kind of mosaic. They’re often seen on surfaces that have been covered in tiles. Because floor and wall tiles are often designed to fit together perfectly, without any overlap or gaps, the resulting pattern is often a tessellation.

Tessellation is sometimes spelled with one l, as tesselation. 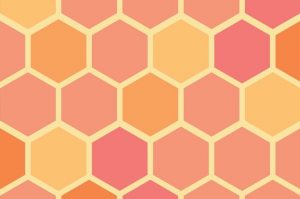 Source: Getty. An example of a tessellation formed from hexagons.

Example: The building was designed to look like a tessellation in the form of a honeycomb pattern.

Where does tessellation come from?

The first records of the word tessellation come from the 1650s. It ultimately comes from the Latin word tessellātus, which means “mosaic” and is related to the Latin tessell(a), meaning “a small square stone or cube.”

A pattern consisting entirely of squares is probably the most basic kind of tessellation. Some tessellations require more than one kind of shape to fit together perfectly. Many traditional quilts feature tessellations that consist of multiple kinds of shapes. Tessellations can even be found in nature, such as in the patterns on the skin or fur of certain animals or the shapes that form in dried mud. The artist M. C. Escher is known for creating intricate tessellations from irregular images, such as birds and fish.

What are some other forms related to tessellation?

What are some synonyms for tessellation?

What are some words that share a root or word element with tessellation?

What are some words that often get used in discussing tessellation?

How is tessellation used in real life?

Tessellation is a somewhat technical term for a mosaic or repeating pattern of shapes. Tessellations can be found in all kinds of artwork, such as tilework and quilts, but they can also occur naturally.

Mathematical concepts like geometry, proportion, and tessellation are used in the making of every quilt.
:
:
:
Kim Jeffree
The Yellow Room Quilt
Cotton, 2015 pic.twitter.com/4qIFJ8H8HR

Patterns in nature. An example of a Voronoi Tessellation (like the shapes seen on a giraffe or in the wings of a dragonfly) in drying mud at Boolcoomatta. @BushHeritageAus @OutbackEco @SciNate #Boolcoomatta #SouthAustralia #voronoi pic.twitter.com/DbtZA5CtGo

Is tessellation used correctly in the following sentence?

The artist’s tessellation of the images creates a continuous pattern with no end and no beginning.

How to use tessellation in a sentence