Feedback
Previous "Supposedly" vs. "Supposably": Yes, There Is A Difference Next What Makes "Passover" A Day Not To Overlook?

Take a minute to think back to the beginning of the pandemic. Do you remember the Great Toilet Paper Shortage of 2020 that signaled the end of the Before Times? It has been one heck of a long year and a lot has changed since then, including our bathrooms.

Fearing the unthinkable, a number of people installed bidets in their bathrooms to avoid a disaster. For those of us still wiping, we have heard the word bidet used a lot more lately. But what is a bidet, exactly? Is it a fancy toilet? Is it a weird sink?

If worrying about this has got you pooped, you’re about to be relieved. We are going to help you digest the difference between these two plumbing fixtures so you’ll be number one when using devices that are designed for number two.

What is a bidet?

A bidet is a low, basinlike bathroom fixture, usually with spigots, used for bathing the genital and perineal areas. A bidet is used to clean yourself off after you’re done with the toilet. It serves the same purpose as toilet paper but uses water instead of paper.

Install that bidet and you can probably stop hoarding toilet paper. That will give you the time and space to learn the difference between “hoard” and “horde.”

Typically, a stand-alone bidet resembles a small basin on the floor next to a toilet. However, there are several different types of bidets that a person can purchase based on their needs: 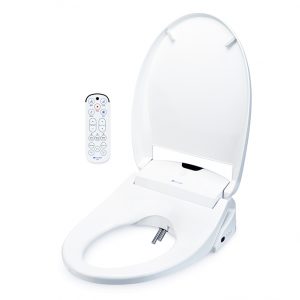 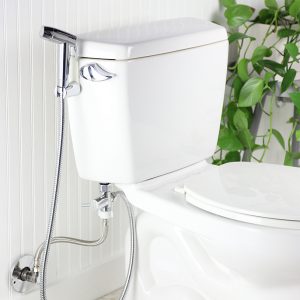 For a lot of us, we may only know that a bidet is that odd bowl thing you can find in French bathrooms. This isn’t a coincidence, as both its origin and pronunciation are French!

In French, the word bidet is pronounced [ bee-dey ]. In English, many people pronounce it [ bih-dey ]. Like other French loanwords, the final consonant in bidet goes unpronounced, although some speakers have Anglicized the word as [ bih-det ], voicing that final T. You can find other examples of this in other French loanwords such as escargot, cabaret, or faux pas.

What is the origin of the word bidet?

The word bidet has been traced back to the 1620s. It comes from the Middle French word for “pony.” It is possible that the word refers to how a person would straddle a bidet in order to use it as if riding a horse. Alternatively, it may have been inspired by bidets‘ popular use by French horsemen who had sore posteriors after long days in the saddle.

People weren’t just horsing around when it came to usage, though, as the first recorded sense of bidet back in the 1600s was, in fact, used to mean a small saddle horse.

A brief history of bidets

We don’t actually know who invented the bidet, but its creation can be traced back to early 18th-century French furniture-makers. We know that the French royal family had a bidet by 1710, so it is possible that royal furniture-maker Christophe Des Rosiers came up with the idea.

There are several theories as to why bidets are uncommon in the US:

People may also avoid bidets due to popular misconceptions they have about them, such as they are messy or expensive. (Not true!)

You can find bidets all around the world. Besides France, bidets are common in other European countries such as Italy and Portugal. You can also find them in South American countries such as Argentina and Venezuela, and you’ll find some very fancy ones used in Japan.

In recent times, bidets have begun to become more common in the United States. Besides the Great TP Shortage of ’20, a person may opt for a bidet because it has many health benefits, especially for pregnant and postpartum mothers, persons with mobility difficulties, and people with a variety of different medical conditions.

What is a toilet?

A toilet is a bathroom fixture consisting of a bowl, usually with a detachable, hinged seat and lid, and a device for flushing with water, used for defecation and urination. A toilet is generally thought of as the place where human waste goes and unfortunate goldfish meet their end. In the United States, toilet paper and wet wipes are also flushed down toilets every day. Even if this bathroom fixture comes equipped with a bidet-like hose attachment (called a bidet sprayer or toilet sprayer), it is still generally called a toilet.

A toilet by any other name is still a fixture in our lives. Do you call it by any of these alternative names?

Where does the word toilet come from?

It turns out that the word toilet is also French! (What is it with French and bathrooms?) The word toilet is traced back to the 1530s and comes from the French toilette, meaning “cloth” or “wrapper.” This French term originally referred to a cloth wrapped around clothes.

In the 1600s, the word was used to refer to a cloth covering a dressing table and later to the articles used to dress oneself. Beginning in the 1800s, it was used to refer to the place a person would dress or wash oneself. This general use continues today, as a person may say they need to find “the toilet” when they are looking for the bathroom.

A brief history of toilets

The history of toilets arguably goes back to ancient Roman times, although it would be a bit of a stretch to refer to what was basically a hole in the ground as a toilet. The precursor to the modern flush toilet was invented by Sir John Harington in the late 1500s, although his invention wouldn’t catch on until nearly 200 years later, when plumbing innovations made the device less smelly.

As for toilet paper, the origin can be traced back to the birthplace of paper itself: China. Chinese noblemen used paper for sanitary purposes as early as the sixth century and were producing it in bulk by the 1300s. In the West, the first commercially sold toilet paper didn’t appear until the 1800s. Prior to that, people made do with whatever they could find, such as newspapers and magazines.

Today, some people avoid using toilet paper due to environmental concerns.  In particular, higher usage of bidets may lessen the environmental impact of toilet paper manufacturing and reduce the impact on the water supply by billions of gallons of water yearly.

How to use bidet vs. toilet

No, we aren’t going to potty train you. We are just going to quickly teach you the difference between these two bathroom fixtures so you don’t have any embarrassing accidents.

A toilet is where you do your business. After being used, a toilet is flushed and waste travels through pipes into a sewage system or septic tank. A bidet is much closer to a sink than a toilet: it is used for washing yourself and isn’t designed to deliver … stuff to the sewer. Here are examples of how these two words are correctly used in a sentence:

While the word bidet may have or have had a few sullied connotations, the word toilet is used in various expressions (e.g., the value of my stocks has gone down the toilet), has many interesting synonyms (e.g., the can, the john, the crapper), and is often described with fun euphemisms (ex: I need to see a man about a horse).

In the end, no matter what you choose to do when you “unloose the caboose“—we all go to the bathroom, and we have plenty of words to describe that fact of life.

This article was sponsored by Brondell, Inc., delivering a healthy home experience and leading the #washdontwipe revolution!

Either way, we all know that good hygiene is essential. Would you say that fact is "proved" or "proven"?

Previous "Supposedly" vs. "Supposably": Yes, There Is A Difference Next What Makes "Passover" A Day Not To Overlook?
RELATED POSTS