The Bacon emoji 🥓 depicts a strip or two strips of bacon. It is commonly used to represent bacon, breakfast, and even actor Kevin Bacon.

Feeling hungry yet? Learn about how French fries are enjoyed across the globe. Would you like ketchup or masala with that?

Where does 🥓 Bacon emoji come from? 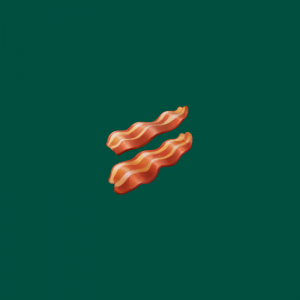 The Bacon emoji 🥓 was approved under Unicode 9.0 in 2016. On most major platforms, the emoji depicts brown, crispy bacon. Most platforms depict two strips of bacon but the Google, Twitter, and Facebook versions depict a single strip. The Microsoft and Twitter versions have the bacon descending to the right while all other platforms have the bacon facing the opposite direction.

Bacon (and similar cuts of pork) is an incredibly popular food around the world among pork-eating cultures. It is often eaten during breakfast in the United States as well as the United Kingdom and Ireland (both where it’s referred to as rashers) and other countries. For this reason, the Bacon emoji 🥓  is often used alongside other breakfast foods emoji such as the Cooking emoji 🍳, the Pancakes emoji 🥞 , or the Hot Beverage emoji ☕.

The Bacon emoji 🥓 is also often used to jokingly refer to actor Kevin Bacon and the popular “Six Degrees of Kevin Bacon” party game named after him.

The Bacon emoji 🥓 is used to refer to bacon or breakfast.

I don’t care what time I wake up, the first thing I’m going to eat will be breakfast food. 🥞🍳🥓

The Bacon emoji 🥓 is also used to refer to actor Kevin Bacon.

The only thing between us is 6 degrees of Kevin Bacon 🥓

This is not meant to be a formal definition of 🥓 Bacon emoji like most terms we define on Dictionary.com, but is rather an informal word summary that hopefully touches upon the key aspects of the meaning and usage of 🥓 Bacon emoji that will help our users expand their word mastery.