The Egg emoji 🥚 depicts a chicken egg. It is used to refer to eggs, especially when they are used in cooking and in reference to breakfast foods, such as scrambled eggs.

The Egg emoji 🥚 is also used during Easter, which is a movable holiday commemorated each spring. In 2021, Easter falls on April 4. During this holiday, the Egg emoji is often accompanied by the hashtag #Easter and is used alongside other emoji such as the Rabbit 🐇 and the Hatching Chick emoji 🐣.

Where does 🥚 Egg emoji come from? 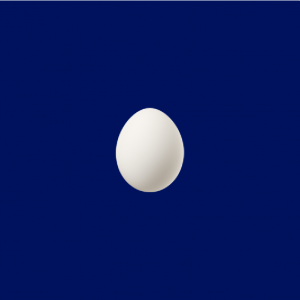 The Egg emoji 🥚 was approved under Unicode 9.0 in 2016. On all major platforms, the Egg emoji 🥚 resembles a chicken egg. The Apple, Samsung, and Microsoft versions of the emoji depict a white egg. On Google, Facebook, Twitter, and WhatsApp, the emoji instead depicts a brown egg.

Because eggs are a commonly eaten food and popular ingredient in recipes, the Egg emoji 🥚 often appears alongside social media posts about delicious meals or cooking.

The Egg emoji 🥚 is also used during Easter. On Easter, it is a common tradition to paint and/or eat Easter eggs. The holiday is associated with rebirth and the start of springtime, with an egg and hatching chicks serving as symbols of new life.

The Egg emoji 🥚 is also used in posts about Easter egg hunts or the Easter Bunny, who hides Easter eggs.

The Egg emoji 🥚 is used generally when talking about eggs or cooking with eggs. The emoji is popular in social media posts about popular breakfast foods, such as scrambled or poached eggs, and omelets.

What's on the menu for breakfast this morning? Hear some egg-spert tips on cooking the perfect egg. 🍳🥚 https://t.co/8zPWYXcJC2 pic.twitter.com/Fyflo3MtBF

I absolutely NAILED IT on the scrambled eggs this morning. Today is gonna be a good day. 🥚

It’s all about the cheese omelette for breakfast on a Sunday. 🧀 🍳 🥚

Unlike Easter eggs, the Egg emoji 🥚 is also easy to find during Easter.

What are you cooking for #Easter brunch? 🐰🥚
RECIPES: https://t.co/HGENBnGE7S pic.twitter.com/26AH9QgNte

Off to our Easter Egg hunt. Yum and yay in equal proportions 🥚🐇🐣🐰

This is not meant to be a formal definition of 🥚 Egg emoji like most terms we define on Dictionary.com, but is rather an informal word summary that hopefully touches upon the key aspects of the meaning and usage of 🥚 Egg emoji that will help our users expand their word mastery.