The Bouquet emoji 💐 depicts a bouquet of flowers. It is commonly used to represent bouquets, gifts, flowers, love, romance, special occasions, and holidays. In particular, the Bouquet emoji 💐 is often used to celebrate Mother’s Day, which occurs on the second Sunday in May in the United States (May 9 in 2021).

Where does 💐 Bouquet emoji come from? 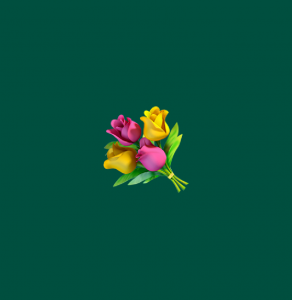 The Bouquet emoji 💐 was approved under Unicode 6.0 in 2010. On most major platforms, the emoji resembles a bouquet of differently colored flowers. On most platforms, the flowers appear to be tulips. Depending on the platform, the emoji may depict a different number of flowers of different colors and may appear realistic or stylized. The Microsoft version of the emoji depicts a bouquet standing straight up, and the Facebook version is slanted toward the right. On all other platforms, the bouquet is slanted toward the left. The Facebook version lacks a band or rope tying the bouquet together, unlike the emoji for other major platforms.

The Bouquet emoji 💐 sees a notable increase in usage on holidays where bouquets are especially common gifts, such as Mother’s Day, Valentine’s Day, Christmas, Easter, birthdays, and wedding anniversaries

The Bouquet emoji 💐 is used to refer to actual flower bouquets that someone gave or received as gifts.

My mom just surprised me at work with flowers “just because.” She’s an absolute queen. 💐

Randomly surprising my wife and daughter with some flowers 💐💕💐

The Bouquet emoji 💐 is also often used to celebrate holidays during which people often receive bouquets.

The Bouquet emoji 💐 is commonly used to refer to romance in general.

Any romantic gesture will never go unnoticed with me. 💖💐

This is not meant to be a formal definition of 💐 Bouquet emoji like most terms we define on Dictionary.com, but is rather an informal word summary that hopefully touches upon the key aspects of the meaning and usage of 💐 Bouquet emoji that will help our users expand their word mastery.