What does 🥶 Cold Face emoji mean?

The Cold Face emoji 🥶 depicts a grimacing smiley blue in the face and covered with icicles or snow from being cold. It is used in reference to winter weather and cold temperatures as well for various slang senses of cold (“harsh”) or cool (“great”). Due to its expression, the emoji is sometimes used to express various intense or painful emotions.

Where does 🥶 Cold Face emoji come from? 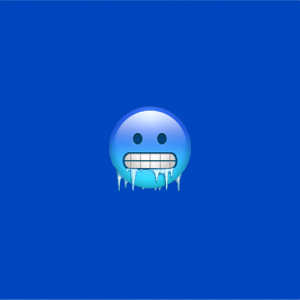 Most major platforms use the same or a similar expression as their Grimacing Face emoji 😬 . Apple, Samsung, Microsoft, Twitter, and Facebook show the face covered with icicles. Google and WhatsApp show the smiley covered in snow and snowflakes.

The Cold Face emoji 🥶 is most widely used to describe various things related to cold temperatures and winter weather and activities.

My sister and I, smiling on the outside while my feet freeze and I’m actually miserable. 🥶 pic.twitter.com/LSvKE6T0Z2

That chilly winter moon coming up over Denver! 🥶🌙 pic.twitter.com/V6BicuDUWE

The Cold Face emoji 🥶 is also sometimes used to describe things that are cool in slang.

The Cold Face emoji 🥶 is also used in various ice-related idioms or metaphors.

Sending Fergie to get a blood test, cause there's just ice in his veins 🥶#GoCrossGo pic.twitter.com/q8mqGDESsr

🥶 ICE COLD 🥶@isaacokoro303 grabs the rebound, gets the foul and knocks down a free throw… It's a tight one here in Auburn Arena!

The Cold Face emoji 🥶 can also be used for intense emotions—like when one’s face might resemble the strained expression of the emoji.

The semester is now over, happy holidays now let’s rage 🥶

Good at hiding pain i be hurting but it won’t ever show. To painful to thinkbout my problems but i can’t let em go. 🥶

This is not meant to be a formal definition of 🥶 Cold Face emoji like most terms we define on Dictionary.com, but is rather an informal word summary that hopefully touches upon the key aspects of the meaning and usage of 🥶 Cold Face emoji that will help our users expand their word mastery.