Let these coffee terms percolate in your mind so the next time you’re ready to order a “cup of joe,” you’ll know exactly which drink you want.

Where does ☕ Hot Beverage emoji come from? 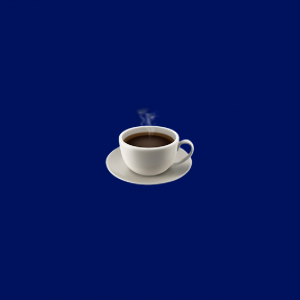 The Hot Beverage emoji ☕, also popularly called Coffee emoji or Tea emoji, was approved under Unicode 4.0 in 2003. On most major platforms, the emoji depicts a white or grey cup with a handle on the right side filled with a brown liquid. On most platforms, steam is emitting from the cup, but the Samsung and Facebook versions lack the steam. The Facebook version is the only major platform to not have the cup placed on a saucer.

Possibly due to its ambiguous name and appearance, the Hot Beverage emoji ☕ is used to refer to a number of heated drinks, with coffee and tea being far and away the most common. The use of the emoji seems to coincide with whatever heated drink the user is more familiar with or prefers to drink.

Longer days mean more time for coffee.  ☀️☕
@Starbucks, March 9, 2020
Recording every night after work to get this album done for you. Worth all the work but definitely a challenge. Time for tea & vocal rest. 💕☕
@ArianaGrande, June 5, 2013

The Hot Beverage emoji ☕ is commonly used to refer to coffee…

It's a pão de queijo and coffee type of Friday 😋☕ pic.twitter.com/XfOEs4qxra

Fuel up with our fall favorites! 🍂🎃☕ pic.twitter.com/U4rzEJGgMT

Working on sharing my gratitude.

Mint tea in the morning ☕

In either case, the Hot Beverage emoji ☕ is also used to refer to mornings.

The only thing that matters is that we try to do and be better.