🤟 I Love You Gesture emoji

What does 🤟 I Love You Gesture emoji mean?

A universal emoji! Or … is it?

The love-you gesture or I love you hand sign emoji is the American Sign Language gesture for “I love you,” showing a hand with a raised index finger and pinky (little) finger and an extended thumb. It comes in a range of skin tones.

It’s used to express affection … but is also used when people are trying to find the sign of the horns 🤘instead (oops).

❤️ Red Heart emoji, 💋 Kiss Mark emoji, one love, I love you to the moon and back, skinny love

Where does 🤟 I Love You Gesture emoji come from? 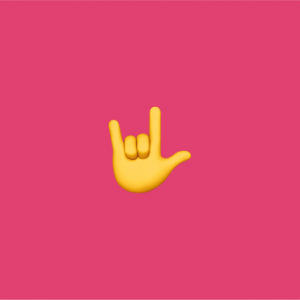 It seems a natural fit for the Unicode consortium (emoji gatekeepers, for the most part) to embrace American Sign Language signals. The love-you gesture or I love you hand sign emoji was approved for Unicode 10.0 in 2017 and added to Emoji 5.0 in 2017.

It came about after a petition by two people, one being Western Oregon University professor C.M. Hall. In 2015, Hall said, “The deaf community being one that is incredibly marginalized and pathologized … When we insert gestures (in emoji), we are already communicating visually, so why not include the most recognized gesture in ASL? I see it as such a simple, yet profound benchmark of dignity.”

They’re so similar that the rock star Gene Simmons of the band KISS attempted to trademark this version, the love-you gesture emoji, as his own take on the rock on emoji. He withdrew his application, mostly due to widespread criticism from other musicians.  Maybe he also withdrew it when he realized it was the wrong symbol …

Examples of 🤟 I Love You Gesture emoji

pursue your dreams. Do everything you can to live your happiness. Good morning everyone 🤟💛
@connorpugs, September, 2018
Just a friendly, mid-scroll reminder to drink water 🤟
@valerietr47, September, 2018
I don’t know what’s going on at #SPNIndy but I am loving all the sign language videos the #SPNFamily is sending me from there! #SPNSignLanguage y’all! 🤟
@Shoshannah7, September, 2018
SEE MORE EXAMPLES

Who uses 🤟 I Love You Gesture emoji?

Browsing social media, you may be struck by the range of uses for the the love-you gesture emoji. It’s used to express affection or intense approval for someone or something, romantic love, and even, yes, a kind of “rock on!” enthusiasm where they could use the more rock’n’roll emoji, the sign of the horns.

Maybe they choose the love-you gesture for the extra positivity, right?

Ain't no such thing as a love that's better then yours

This weekend should be good 🤟🏼🍻

I finally got another tattoo today 😁🤟🏼 pic.twitter.com/zQLY5MmecL

Who says emojis don’t do a great job of conveying emotion?

boy you got me trippin

clumsy cause i’m falling in