What does 🦠 Microbe emoji mean?

Where does 🦠 Microbe emoji come from? 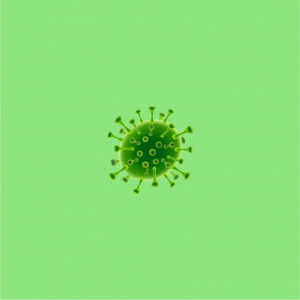 The Microbe emoji 🦠 was approved under Unicode 11.0 in 2018. On most major platforms, the emoji resembles a wriggly, single-celled virus or bacterium (like a bacillus) covered in flagella. Microsoft’s version of the emoji is blue and WhatsApp’s is purple; Apple uses a green spherical microbe (as a coccus) for the emoji.

The Microbe emoji 🦠 was proposed alongside a number of other science-themed emoji (including Petri Dish 🧫 and DNA 🧬, which were also approved) as part of a joint campaign organized by the American Chemical Society and General Electric. For the campaign, named Emoji Science, the effort gathered evidence-based suggestions from scientists from the International Council for Science.

In 2020, the Microbe emoji 🦠 surged due to the COVID-19 pandemic, and was used to represent the coronavirus, COVID-19 disease, and the historic impact of the deadly pandemic on public health, school, work, and life in general.

My room is my sanctuary. I don’t even like bringing my luggage in there when I’m home from a trip. So many germs 🦠
@dezidoesit, June 28, 2019
Minnesota has been asked by the Center for Disease Control to be one of four states for pilot #Covid_19 vaccine distribution planning. 🦠 💉
@amyklobuchar, August 4, 2020
As conversations on Twitter shifted towards the novel coronavirus and our means of dealing with its spread, the microbe emoji saw a 1662% increase in use, according to the platform.
Palmer Haasch, Insider, September 15, 2020
SEE MORE EXAMPLES

Before the 2020 pandemic, the Microbe emoji 🦠 was used generally to refer to being sick or germs.

I’m sad to announce that I have a cold. It’s been a long time coming (itchy nose for a week+) and I put this moment off, but this afternoon there is no more denying it. I must fight off this 🦠

I can’t wait to get home and wash my hands, this germ phobia is real 🦠

In 2020, use of the Microbe emoji 🦠 dramatically increased and shifted to refer specifically to the coronavirus and its many global consequences.

remember to get your flu shot this year! 💉 it's always important to protect the most vulnerable members of our community, but especially so this year 🦠

i have a covid blood test tomorrow, wish me luck! 🦠

Passing through Miami Airport and it feels like one big Corona germ! 🦠

This is not meant to be a formal definition of 🦠 Microbe emoji like most terms we define on Dictionary.com, but is rather an informal word summary that hopefully touches upon the key aspects of the meaning and usage of 🦠 Microbe emoji that will help our users expand their word mastery.