The pie emoji depicts either a slice of pie or a round pie in a dish, showing a golden crust and sometimes wisps of rising steam. Mmmmm. Pie. 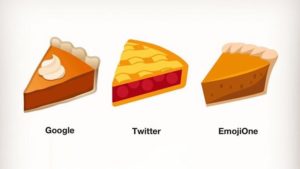 It’s questionable whether the emoji pie is sweet or savory as the images range from a slice that exposes a rich red, cherry filling to a slice of traditional pumpkin pie with a dollop of creamy whipped topping to showing none of the filling at all.

The pie emoji is often used with other emoji that refer to food, and especially desserts, but it’s also paired with emoji that represent the fall season, since fall is a big time for pie.

My 😋 tasty shepherds 🥧 the other night obviously made by me 😋😋😋😋 pic.twitter.com/YMeua7kneD

We love the fundraiser idea—pie someone for a good cause!

Have you wanted to pie a Phi Mu? Well now is your chance!! Come to Riseman Plasa this Thursday! 🥧 all benefits going to CMNH!! pic.twitter.com/VBvXbAwdLQ