What does 💜 Purple Heart emoji mean?

The Purple Heart emoji 💜 depicts a classic representation of a heart, colored purple. It is commonly used to represent love, support, close bonds, and admiration for things that have some relation to the color purple.

The Purple Heart emoji 💜 is specifically used in reference to the Purple Heart medal awarded by the U.S. Armed Forces and frequently used by the fandom of the Kpop boy band BTS. It is also used to mark Purple Day on March 26, which increases awareness of epilepsy, and on November, World Sanfilippo Awareness Day.

Where does 💜 Purple Heart emoji come from? 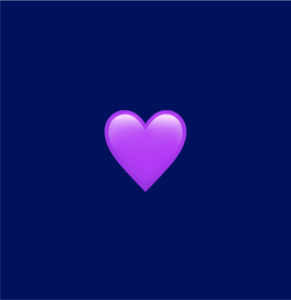 The Purple Heart emoji 💜 was approved under Unicode 6.0 in 2010. On all major platforms, the emoji takes the form of a heart in various shades of purple. The Microsoft version of the emoji has a black outline.

The Purple Heart emoji 💜 is used to reference things that are purple, such as purple clothing, purple-themed sports teams like the Minnesota Vikings, or the purple rain of the legendary musician Prince.

goodnight, love you all 💜
@CourtneyHoile, October 17, 2020
Armyyyy what if we all dye our hair purple if bts wins a grammyy 👀 💜
@mahhbabyhubi, October 17, 2020
Jungkook, 22, sings a cover of BTS collaborator Lauv’s “Never Not” in the video, while the tweet is just two words: the song title, accompanied by a purple heart emoji.
Lisette Voytko, Forbes, May 3, 2020
SEE MORE EXAMPLES

Like the many other heart emoji such as Red Heart ❤️ and Blue Heart 💙, the Purple Heart emoji 💜 is generally used to convey love and other strong, affectionate, positive feelings.

I love you ❤️ pic.twitter.com/4ECbregGUs

As noted, the Purple Heart emoji 💜 can also reference the U.S. service medal, things that use purple colors, or the boy band BTS. This emoji can also be used to increase awareness of epilepsy on Purple Day (March 26) and Sanfilippo Syndrome, a degenerative and fatal disease affecting children, on November 16.

A #Throwback you're going to want to see 💜https://t.co/rffV9vjYmk