The Woman Golfer emoji 🏌️‍♀️ depicts a woman swinging a golf club. It is commonly used to represent the sport of golf or sports in general. It is frequently used alongside the Flag in Hole emoji ⛳. The Woman Golfer emoji 🏌️‍♀️ sees increased usage during major golf tournaments, especially the yearly Masters Tournament held in the first week of April.

Where does 🏌️‍♀️ Woman Golfer emoji come from? 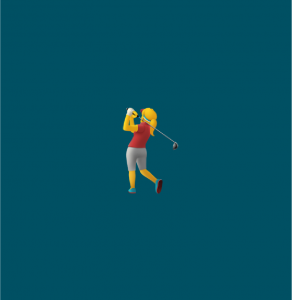 The Woman Golfer emoji 🏌️‍♀️ was added to Emoji 4.0 in 2016. On supported platforms, it is created by combining the Golfer 🏌️ and the Female Sign ♀️emoji. Versions of the emoji generally resemble a yellow-skinned woman with a ponytail swinging a golf club while facing away from the viewer.

On most major platforms, the golfer is using a driver. The colors of the golfer’s clothing varies by platform. The Microsoft version depicts a faceless woman positioned toward the viewer. The woman is wearing a visor instead of a hat in the Apple and WhatsApp versions. The golfer is wearing pants in the Google and Microsoft version, shorts in the Apple, Samsung, and Facebook versions, and a skirt in the WhatsApp and Twitter versions. The golfer is wearing gloves in the Apple and Facebook versions of the emoji. The emoji can be customized with several different skin tones.

The Woman Golfer emoji 🏌️‍♀️ is used to reference golf or famous female golfers such as Annika Sörenstam or Inbee Park.

I wanna go to the driving range on this beautiful day 🏌️‍♀️

"Competing competitively is not my main priority, so finding that switch and just kind of turning it on, it's not as easy as I thought."

My cousin is attending the masters and I’m so jealous! Take me with u next year lol 🏌️‍♀️⛳️ #TheMasters

I would love to watch The Masters at Augusta one day 🏌️‍♀️⛳