Where does 🏌️‍♂️ Man Golfer emoji come from? 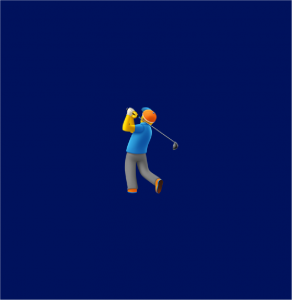 The Man Golfer emoji 🏌️‍♂️ was added to Emoji 4.0 in 2016. On supported platforms, it is created by combining the Golfer 🏌️ and the Male Sign emoji ♂️. On most major platforms, the emoji resembles a yellow-skinned man swinging a golf club (usually a driver) while facing away from the viewer. The colors of the golfer’s clothing vary by platform. The Microsoft version depicts a faceless person positioned toward the viewer. The golfer is wearing gloves in the Apple and Facebook versions of the emoji. The emoji can be customized with several different skin tones.

The Man Golfer emoji 🏌️‍♂️ is used to reference golf or famous male golfers such as Tiger Woods or Arnold Palmer.

It’s been a solid two weeks of golfing. My shot getting better and better every time I hit the Driving Range 🏌️‍♂️

Tiger Woods had a 10 on a Par 3. Now he knows how the rest of us mortals feel. 🏌️‍♂️ #MastersTournament