Feedback
Previous What Are We Gonna Call Self-Driving Cars If "Automobile" Is Already Taken? Next Farther vs. Further

The continued box office success of the Fast and the Furious franchise gives moviegoers and word-lovers something to cheer about. Beyond the stunning action sequences, though, audiences, including us, actually really enjoy the title itself.

That probably has something to do with its alliteration, “a figure of speech in which a consonant sound at the beginning of a word is repeated” (in this case the sound of the letter F). The alliteration is suspended here with a two-syllable separation, which also helps make this title sound like lines from a poem.

So, where did the phrase fast and the furious actually come from?

Well, it turns out the phrase fast and furious actually does come from a poem! It first appears in a 1791 piece, “Tam o’ Shanter” by the Scottish poet Robert Burns, in which he depicts the thrill of a country dance:

As Tammie glowr’d, amaz’d and curious,
The mirth and fun grew fast and furious;
The piper loud and louder blew,
The dancers quick and quicker flew.

What does fast and furious mean?

Since the mid-19th century, the phrase fast and furious has been an idiom meaning “swiftly, intensely and energetically.” But as this Google Ngram shows, the phrase didn’t really become an often-used idiom until after the 1820s, almost 30 years later: 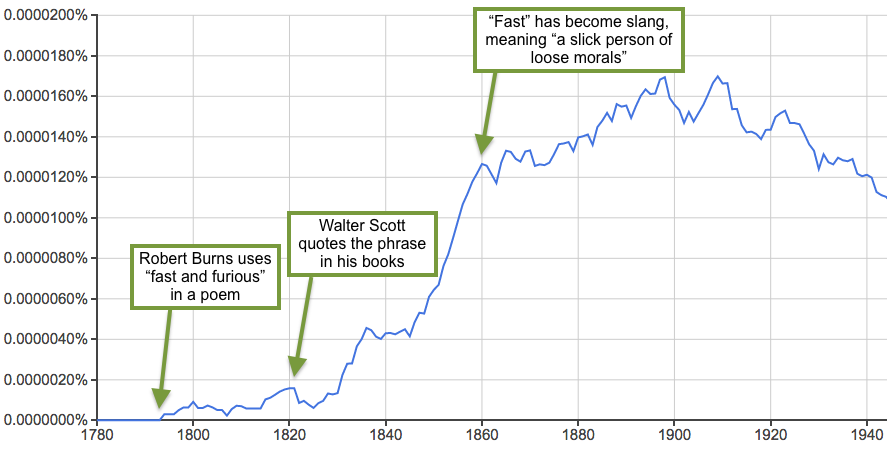 What caused this little-known phrase to go viral?

Burns’s phrase likely got a huge boost by being quoted in the novels of Sir Walter Scott. Scott had met Burns as a teenager and was a poet himself, but late in life wrote a series of historical romances collectively known as the Waverley novels, which became wildly popular in both Europe and America in the 1800s.

The Romantic movement of early 1800s English literature was a watershed moment in the history of cool. In Burns’s 1791 poem we already see how the phrase fast and furious is used describe mirth and fun. Another writer who wrote in the generation after Burns, Thomas De Quincey, was among the first to write appreciatively about doing drugs and staging wild carriage races on the British highways, while poets like Lord Byron and Percy Shelley played their own roles in making being bad seem rad. Without the cultural influence of these Romantic renegades, it’s questionable whether there ever would have been any Fast and the Furious movies (or many other examples of pop culture badassery, for that matter) in the two centuries that followed.

But before Burns and Scott used the phrase, the meanings of both fast and furious had already evolved.

What is the origin of fast?

The word fast in Old English meant something more like “firmly, strongly, vigorously” than it meant “speedily.” (Think: to hold fast.) But if one event occurred fast on another event (a metaphor), it was so quick it was almost attached to that event; so fast began to describe speed.

In the mid-18th century, fast also became a slang term to describe “living an unrestrained life” (often in reference to a “fast woman”).

What is the origin of furious?

Furious, meanwhile, came from the Latin furiosus, “full of rage,” which itself derived from the Furiæ, vengeful spirits of Greco-Roman myth.

How did the phrase become associated with cars?

Invented at the turn of the 20th century, the car quickly became iconic, particularly in America, where it came to represent the freedom (and danger) of the open road. By 1908, early cars were already being raced in high-profile events, like the New York to Paris Race. So, both cars and the phrase fast and furious were well-established in popular imagination when director Roger Corman made a 1955 noir film titled The Fast and the Furious, featuring a plot about a group of outlaws racing cars with dangerous women.

Corman’s film inspired both the title and the subject matter of the Fast and the Furious series, which began in 2001.

Previous What Are We Gonna Call Self-Driving Cars If "Automobile" Is Already Taken? Next Farther vs. Further
RELATED POSTS

Home / Pop Culture / Where Did The Phrase “Fast And The Furious” Come From?